While my back was turned...

You know the feeling. When a tree which has always stood in a place is somehow removed, or a building that you were so accustomed to seeing is all of a sudden...gone. And you ask yourself, what was there? When did it go?

That feeling has happened to me lots on trips 'home' to Picton over the decades. Buildings succumbed, perhaps amid great furor, but on my return, just an empty spot, or a new building pretending it has always been there..."nothing suspicious here."

I recently received a wonderful gift. Actually, made a discovery. In a recycling box (well, you can't keep everything) I recognized a familiar magazine, in a former black and white iteration. I winkled several issues out from a pile of other discards, and am now enjoying ACORN, the newsletter of the ACO, from the 1985 to 1990 seasons.

There are so many stories to share, but today I am sharing photos of Picton buildings which were part of my childhood. At some point, when I was away, they disappeared. I am so grateful to the folks who fought on their behalf, and share their sadness at the losses. 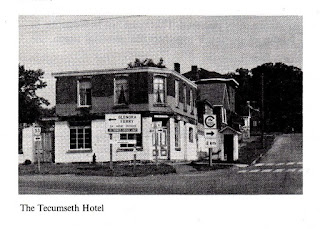 The little building to the left is the Tecumseh Hotel, whose story was told by Gilles Miramontes in the Spring 1987 issue of ACORN. He makes the point that this corner of Bridge and Union streets was "the cornerstone of the original village of Picton" and emphasizes the importance of context, with this hotel and the (fortunately saved) North American hotel at the top of the town hill providing the visual anchors to the history and the townscape. The old Delhi  district with its coalyards was still viable (though shabby) when I was a girl.


Rodger Grieg, a well-known champion of built heritage in the Quinte area, contributed his usual acerbic and knowledgeable take on the future of Picton's Rickarton Castle in the Spring/Summer 1990 issue of the magazine. He issued a dare of sorts to city council:
"It remains to be seen whether the town of Picton will have the moral fibre to hold on to this highly important landmark if, as some suspect, the new developer-owner chooses to think of removing it."

Picton had two 'castles' once upon a time.
In 1986 Castle Villeneuve was felled by a tragic explosion.
And then it was Rickarton's turn.
Does anyone remember the date?
My go-to girl for local history, my dear little mom, is no longer with us.

And finally, this building. On a visit in the late 80's I can remember mom proudly showing off the modern new drugstore, where I encountered a former classmate from S.S.#3 in her crisp white working smock. What I recall only now, was the butcher shop, Starks' Meat Market, which once stood in its place. As our farm produced meat for the table, we seldom had occasion to visit "Boney Starks" as he was (no doubt unfairly) nicknamed in some circles. What I never noticed, to my loss, was that the butcher shop was housed in a nice three story premises with a detailed brick frieze and eight Renaissance Revival inspired cast iron window hoods. As Greig puts it, "Heritage types like us are supposed to admire the re-use of [4 of the 8] iron window-hoods..." In the same vein, the editor comments that this might be considered "criminal facadism or Teaseling."  Never met Greig, wish I had. Clearly the man did not suffer architectural heritage fools gladly.

Posted by Ancestral Roofs at 2:43 PM