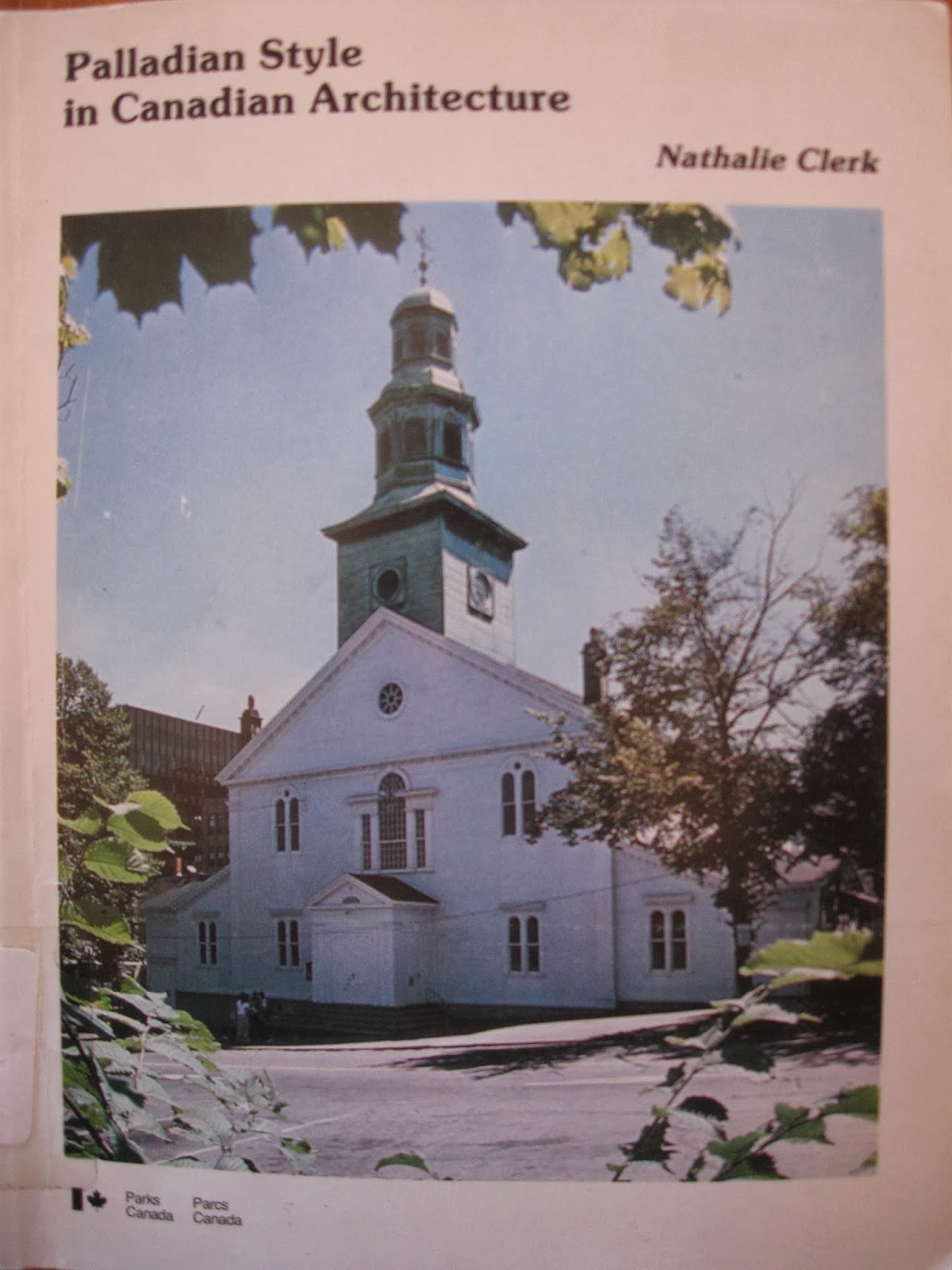 A few posts back I mentioned a series of government publications, a set of academic monographs published as part of the Studies in Archaeology Architecture and History sponsored by the National Historic Parks and Sites Branch, Parks Canada, Environment Canada, 1984. (anyone who has worked in government knows the necessity of acknowledging everyone in any public artifact. Nothing Orwellian here.)

At first, I struggled with the series (as I whined here) but I am now hooked. The series steps outside my favourite books, which identify 'styles', and explores the theoretical influences which underlie them in a more general way. Case in point. Janet Wright's essay on the 'picturesque' includes buildings that we would call Italian Villa, Regency, Gothic Revival, British Classical and so on.Indeed,  the books include assertions that fly in the face of many things I have been taught. Here's an example from Nathalie Clerk: "It is therefore inaccurate to speak of a 'Georgian' architecture, because the term tends to confuse a type of building with a perod of English history" p.8 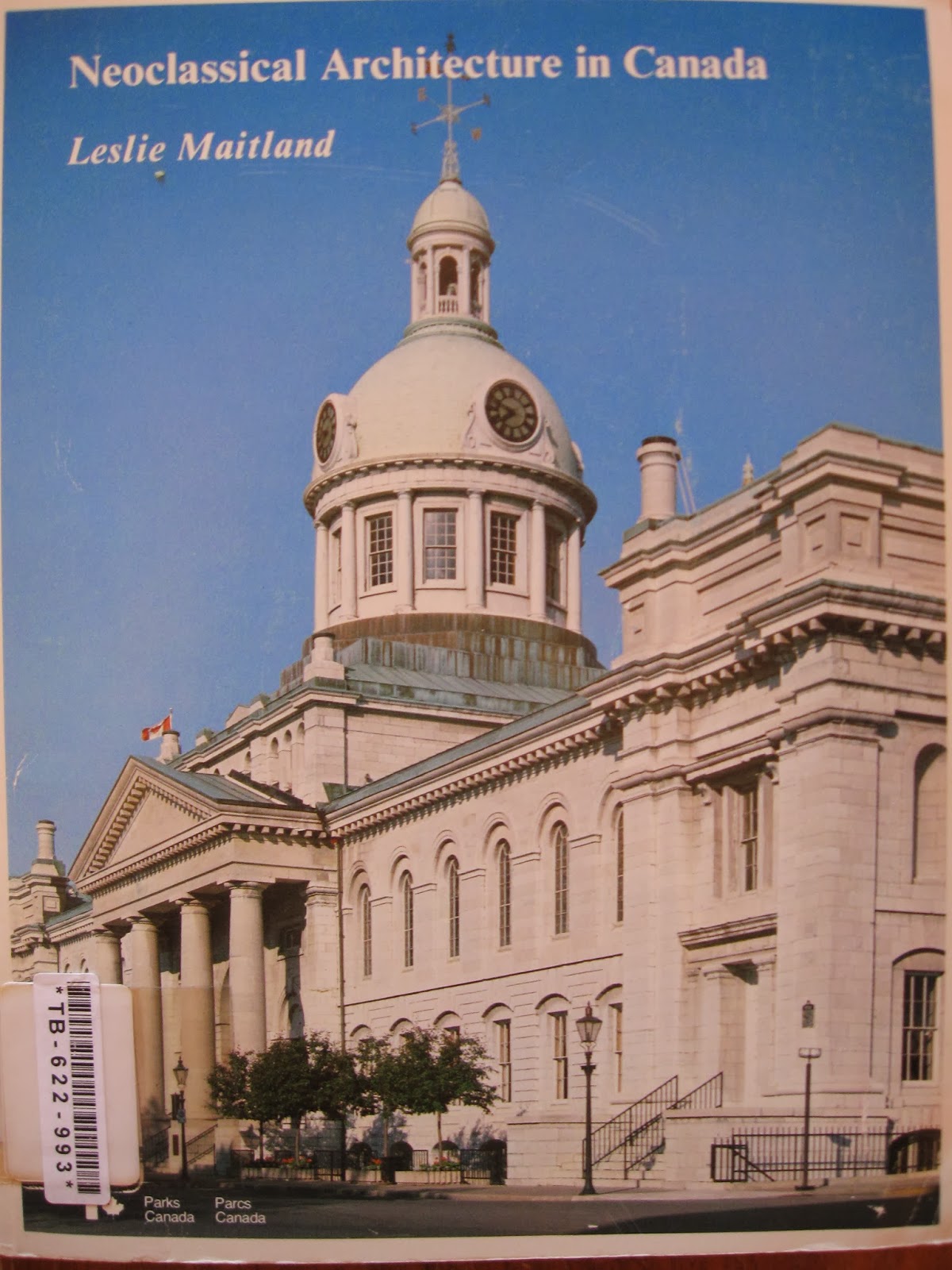 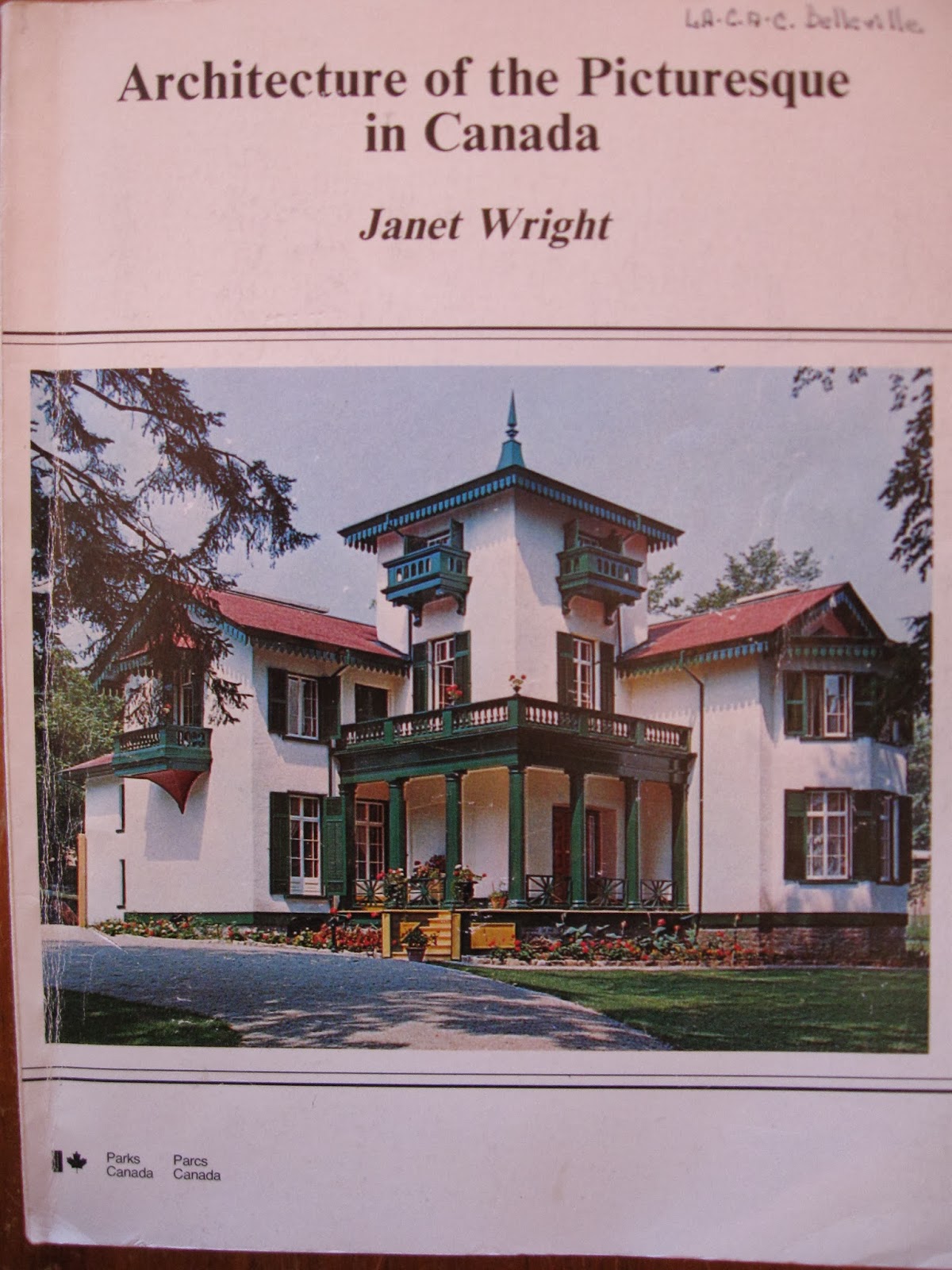 Indeed,  the books include assertions that fly in the face of many things I have been taught. Here's an example from Nathalie Clerk: "It is therefore inaccurate to speak of a 'Georgian' architecture, because the term tends to confuse a type of building with a perod of English history" p.8 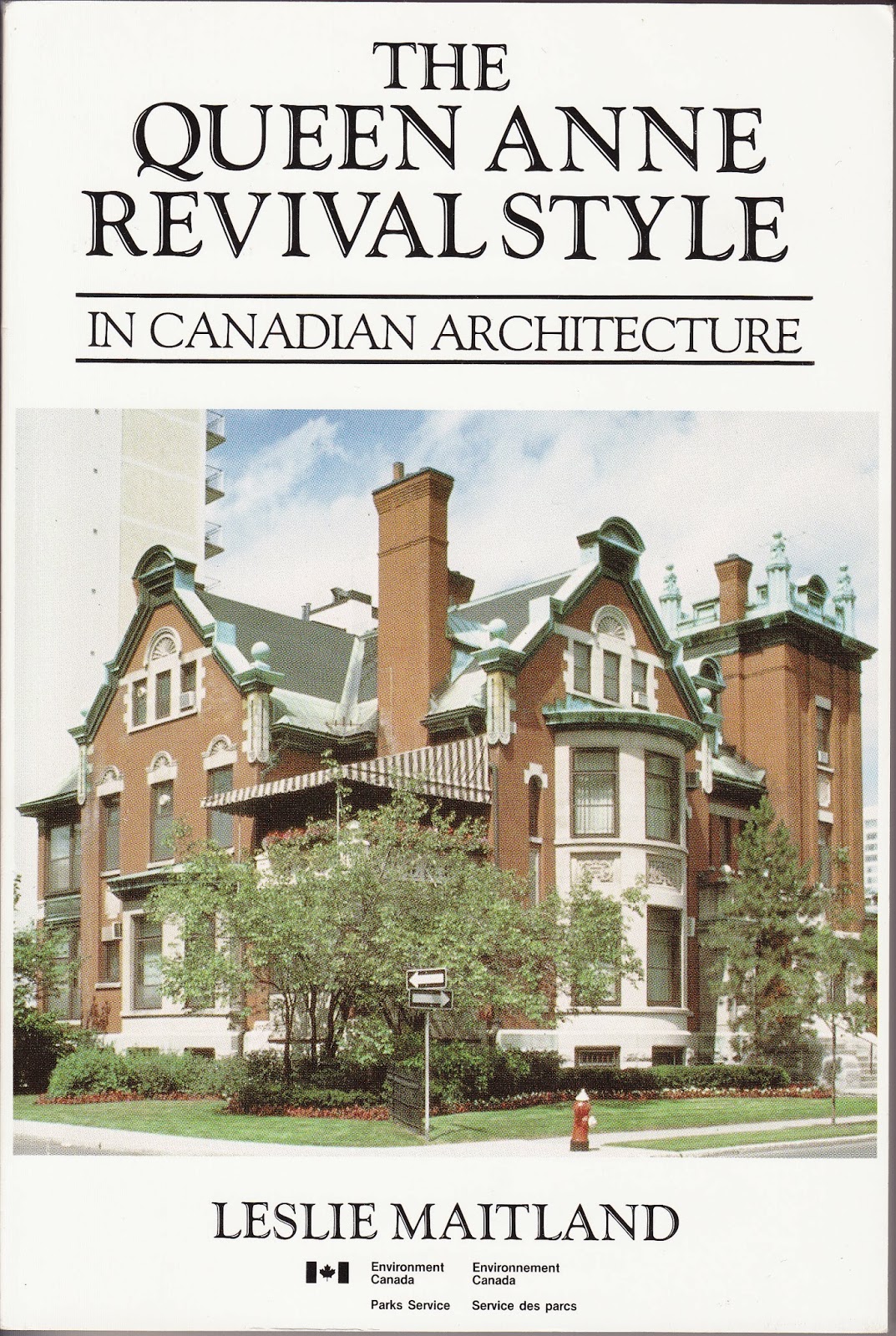 Janet Wright's The Queen Anne Revival Style in Canadian Architecture (1990) is a welcome new edition in the series. Interestingly, this architectural historian for the Parks Service submitted her work for publication in 1984.

One of the things that helped me understand the place of these worthy Parks Canada books on my shelves was an essay I discovered online:  Of Data Sets and Mind Sets by Peter Ennals, in 1987. I won't go into detail in this post for you can read it should you wish.

The 'ah-ha' for me was his description of "two separate scholarly traditions now engaged in the study of our building history." Separate and not playing well together, he goes on to explain, as he outlines the 'academic Art History' group and the heterogeneous camp of "folklorists, cultural geographers, historical archaeologists, and social historians. The Art History folk occupy the high ground of "high style" (professional architects/wealthy clients), the second bunch "desire to understand the much larger array of common domestic structures erected by and for ordinary people," the vernacular. 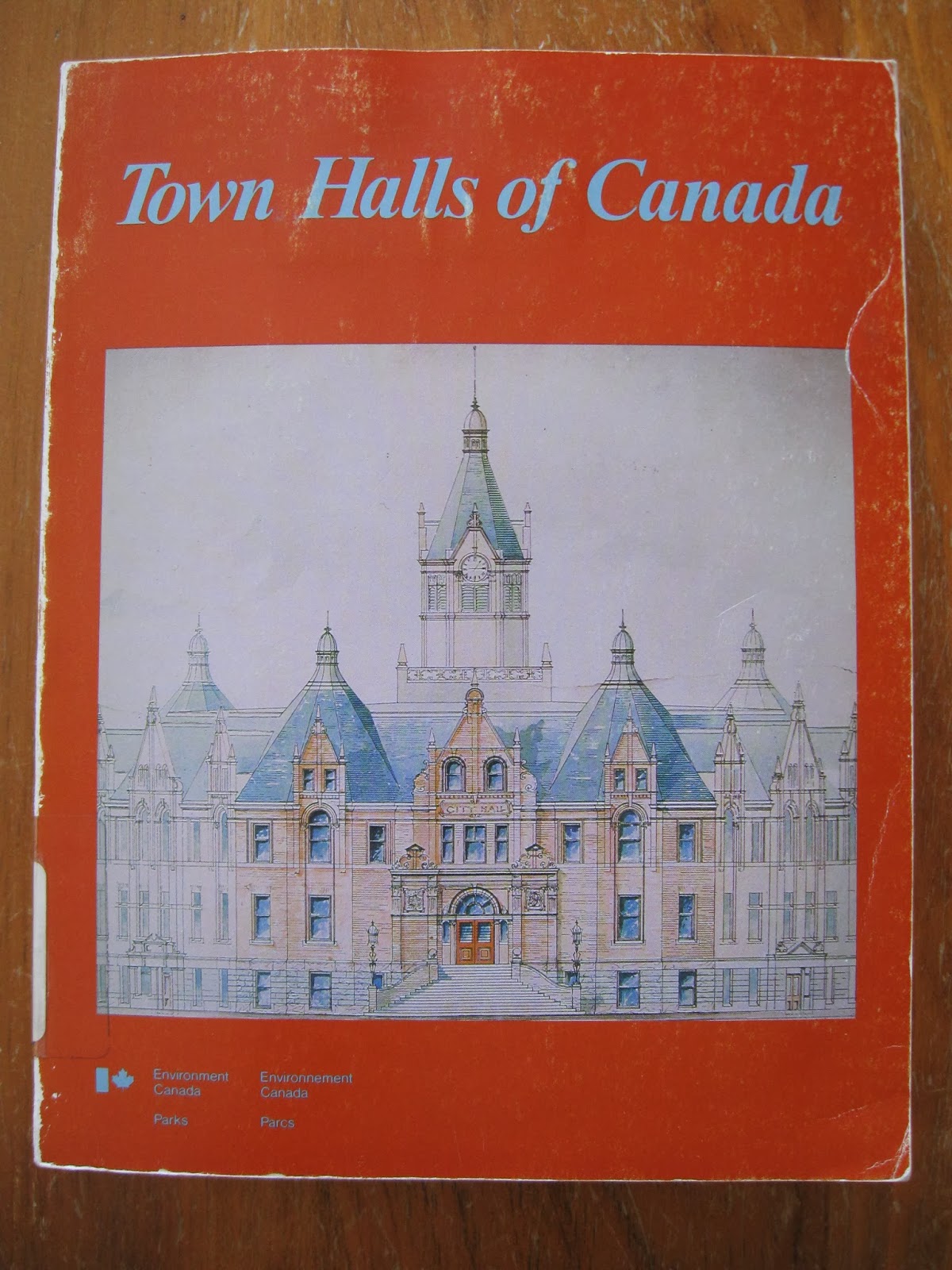 Lots of material on terminology, research methods, the Canadian Inventory of Historic Buildings, which started this whole thing off in 1970. Lots to like in this essay; I recommend it highly. What puzzles me is why I cannot find more recent publications of its ilk.

So I have come to love the academics. I'm in good company. I checked. They are listed as Recommended Reading by my man Blumenson.

And when you finish Clerk,  Maitland and Wright, you'll want to take on another title in the series, Town Halls of Canada, a collection of essays introduced by Margaret Carter. Thanks to Abebooks, I've just acquired a copy, and will be squinting up at town and village public buildings, once my camera and I can stand to be outdoors.