This winter I plan to take myself (and you, if you'd care to come along) on a tour through John Blumenson's Ontario Architecture. Along the way I will create for me (and for you unless you are one of the blog's visitors who already knows way more about this subject than I) a quick study guide to styles (as identified and described by the esteemed Mr. B.

So today I am immersing myself in the lovely, dignified if slightly dour Georgian houses I have visited in my travels. Caveat regarding the use of the term, understood.

I am poring through my photo files (particularly tedious as my laptop failed during the holidays (hey, we all need a break) so I am working on my husband's computer, selecting images one at a laborious time from our shared backup files, visiting spots Mr. B described in his book. A sort of virtual guided walk. 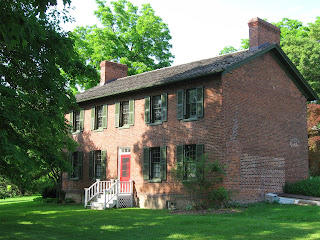 A literary friend hails from Mallorytown, where the house at top left can be found. The red brick house is a classic symmetrical Georgian, simple, five-bay front, with "large wall-end chimneys, steep gable roof and half-round fanlight over the door. p. 9 (incidentally, the house is much improved since Mr. B. took his photo, a good news story.) 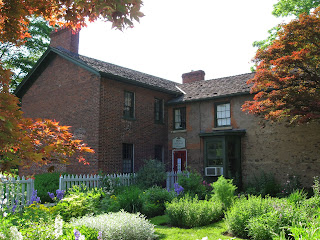 The same symmetrical proportions, and handmade brick are evident in the war-weary McFarland House. This late c.18/very early c.19 house on the outskirts of Niagara-on-the-Lake survived the despicable burning of Newark by Americans during the War of 1812.

The house is now a museum, and has a particularly nice tearoom with garden seating, where I enjoyed an afternoon with my friend Judy whom I lost years ago.


This upright Georgian style house is in old Portsmorth Village, absorbed by Kingston, but still distinct and very, very old. I wrote about this house , near Portsmouth back in 2010, when Blogger wasn't yet so generous with photo space.


This elegantly simple yellow frame house was built at Carrying Place in 1811 (the side wing even earlier). The porch, enclosed porch room above, and the centre gable were all later additions. I wrote about this Loyalist Georgian house back in 2010.
To make this page useful, as well as beautiful (I attribute that contribution to these self-assured early homes), here's a list of typical characteristics of 'Georgian' style domestic architecture according to Blumenson:
-symmetry & harmony (cf. their multi-shaped Medieval predecessors)
-five-bay front, centre entrance or projecting frontispiece
-restrained Classical embellishment (roof and window cornices, moulded surrounds, small entrance portico)
-transom light as wide as the door, separate sidelights or sometimes a half-round fanlight over the door
-large end-wall chimneys
-relatively small windows for the size of the wall
-brick houses in Flemish bond with flat window heads
-12 over 12 sash windows, plain or louvred shutters
-early versions had very steep roof
-academic versions sometimes had Palladian window, pedimented portico with circular light and other refinements
-later, Neoclassical and Regency details were frequently added
Posted by Ancestral Roofs at 1:50 PM