Disappearing Deseronto...a city with a past

Since I met Amanda Hill, the new archivist at the Community Archives of Belleville and Hastings County, I have been taking a growing interest in Deseronto. Now that's not as peculiar as it sounds, as Amanda has long been the archivist in Deseronto, and has created an outstanding website with dozens of albums of historic photos and maps. I'm always on about 'if we lose our historic buildings we lose our history.' Touchstones, as it were. Deseronto is a compelling example of that premise.

Thankfully, it has the Deseronto Archives (that's the link above.)

Early this month, I spent a golden afternoon wandering the streets and fields of the town. I used this tour map. I say 'fields' as one of the most important engines of the town, a massive c19 industrial complex, is noticeable only by its absence. Mill Point (earlier Culbertson's Wharf, later Deseronto) operated under the entrepreneurial Rathbun family from 1848,when the first sawmill was built at Mill Point, to the 1920s.

In the 1890's, the village was home to 3000 residents, the majority hard at work for the Rathbuns. From the Archives' website: "a sash and door factory, shipyard, railway car works, terra cotta factory, flour mill, gas works and chemical works." When the timber on which many of the Rathbun industries relied was finally exhausted, the town's industries shrank, and the Rathbun empire ended in 1923.

This YouTube features audio of Amanda Hill reading a 1892 poem by Archibald MacIntyre. If you overlook the execrable poetry, you will soon realize it's a brilliant west to east tour of the town at its industrial peak. The video also contains loads of maps, charts and photos. An absolutely outstanding history resource!

Interestingly, a novelist keeps the town alive for me. Frances Itani, Belleville born writer of the fine novel Deafening (based on real people in Deseronto, and the turn of the century Ontario School for the Deaf) recently released Tell. Here's an interview with the author. The book literally walks the reader through the town, and peoples existing buildings and streets with engaging and complex characters. Here's an account of a walking tour Frances Itani led just last month.

All along the waterfront of the town are intriguing abandoned properties.One at the east end of town; was it the terra cotta factory site?
Another a bit west along the water; could it have been the home of the chemical works? Was the sloping site west of town once the iron works, destroyed by fire in 1908? Yes, says Amanda. 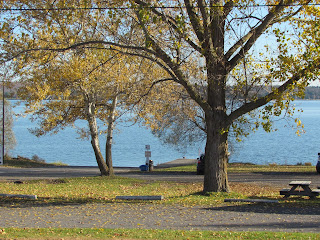 In town, the Community Centre sits on property once used by the Dominion Match factory. A photo on the website shows a massive four storey building, a water tower and tall square brick chimney. I stood in the parking lot and captured a pleasant, decidedly non-industrial shore across highway 2. 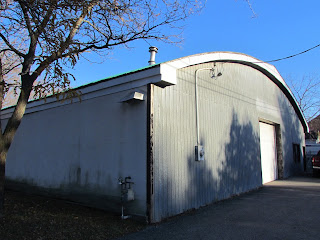 Every time I visit the Deseronto Archives website, I find another treasure. Here, for my future enjoyment as well as yours, is a series of printable brochures about a number of fascinating history sites in the town. Every one a revelation. Here for example, is the Prince Street Public works building moved from its original location, now living a quiet life. In a former iteration (1917/18) it was an aircraft hangar, used for storing and maintaining aircraft at Camp Rathbun, one of two local WWI training camps for the Royal Flying Corps.

Deseronto's past is its future. I'll be back.
Posted by Ancestral Roofs at 12:19 PM