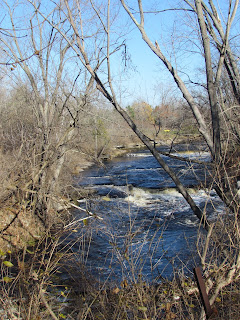 Finally, now that the leaves are off the trees, I have figured out the Napanee River in Newburgh. Well, the map on the interpretive panel outside the doctor's clinic helped.

In its industrial heyday there were 13 mills along the banks of the Napanee and Little Napanee rivers in the village. In actual fact, the centre of the village is an island between the two waterways. The bridges offer lovely invitations to time-travel.

Lots of limestone here. Built homes and shops and factories. Back when manufacturing was done by more people and fewer machines.

Sadly, the 1856 railway bypassed the town (death-knell for early towns and villages) and in 1863 Napanee became the county seat.

Then in 1887 fire destroyed a large section. The good news in all of this is that time stopped in a way, and a number of 1850 era homes and commercial buildings still stand, many in fine shape, to tell the early story 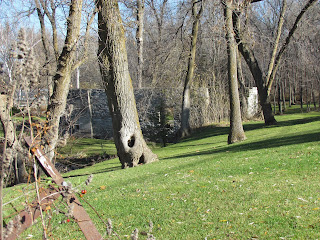 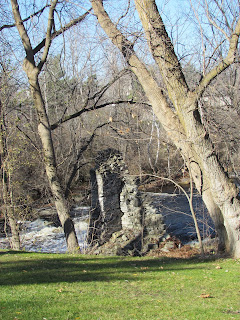 On my way east along Earl Street toward the cemetery to pay my respects to the pioneer industrialists, I came upon an exquisite property below road grade, its manicured lawns spreading out along the river and a tiny creek, beneath towering trees. A modern waterfront home, a barn and a commercial apiary rounded out the picture. Village life, wot? 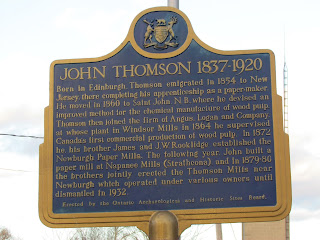 What I loved about the carefully tended property was its limestone ruins. Among them, the owners have arranged a collection of milling machinery bits among the garden plantings. Wouldn't I love a visit? Maybe I will need honey on my next visit. Or I might attend Art Among the Ruins next June, mightn't I?

The ruins are the last traces of the 1872 Newburgh Paper Mill of John Thompson (1837-1920) according to the OHF plaque at the corner of Main and Factory Streets. 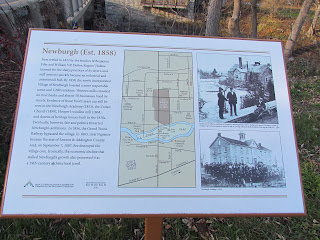 As I headed homeward along Co.Rd. 1, I noted steam billowing from Strathcona Paper Mill, just south along the same river. It's an efficient green manufacturer of box-board. Turns out the modern facility shares some family history. Turns out John Thompson built a paper mill here at Napanee Mills (now Strathcona) the year after the Newburgh plant, in 1873.

And if you're the least curious about the etymology of the word manufacture, and in deference to the workers of Newburgh who once put their shoulders to the wheels of industry, I offer this link.

Posted by Ancestral Roofs at 3:32 PM