Turns out you CAN fight City Hall 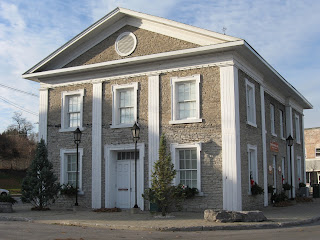 Not long ago I happened through Trenton at lunch-time. For some time, I had been intending to pop round to schedule a research visit at the Heritage and Cultural Centre. What I got instead was a great lunch, grand company, good history, and a chance to get to know some impassioned supporters of the building and its activity - including their hopes for the return of a successful local theatre once housed upstairs. 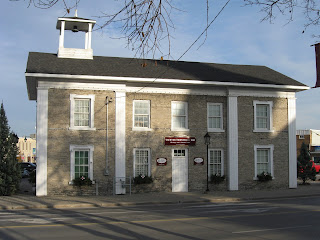 This building, the old market and town hall, was built in 1861. A stone building with Greek Revival distinction, it once was - and still should be - the heart of Trenton.Thanks to some historic images from the online albums on the Facebook pages of  Trenton Town Hall  or the Vintage Belleville, Trenton, and Quinte Region (click 'photos' then 'albums' ) you can travel back in time to when this building was the absolute centre of the town (well, it was more likely King Street United Church, or similar brands, on Sundays.)

Another thing you can do is read Reaching for the Beaufort Sea, the autobiography of one of Canada's most famous poets, and a native son of Trenton. Al Purdy describes a scene which took place in this very market square, from the perspective of a small lost boy:

"A farmer and his wife were passing by in their horse-drawn wagon, on the way to market with a load of farm produce...Speculating that my mother might have gone to market herself, they took me onto their wagon. We clopped off to market while the farm-wife tried to comfort me with soothing words. But I was not to be comforted so easily.
The market was jammed with people. Farm wagons piled with bright orange pumpkins, yellow onions and brown potatoes were backed up at the market square. Puppies in cages awaited buyers. Chickens squawked in other cages. Some were dead and stripped clean of feathers, wearing bloody bandages where their heads had been. A big blue policeman with shining buttons strolled through the mob of townspeople; the Trenton market square also housed the police station."

There's more, but you get the idea. Today a well-ordered parking lot lies just outside. But there's lots going on inside. Here's a chronology, gained from a chat with Laura one of the volunteers:
In 1985 the Trent Port Historical Society saved this building from demolition, and it became the home for their growing collection of historical artifacts from the area's history. 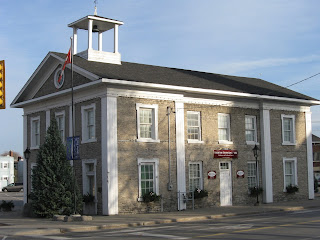 In 2005 then Mayor Williams, a great supporter of arts and heritage, encouraged the Bay of Quinte Community Players (formed in 1946, resurrected 2005) to use the upstairs of the market building as a theatre. Volunteer labour and talent recreated a wonderful replica Victorian music hall in the 1950s era theatre, which still remains. Unused. We have attended productions there in the past; a terrific space. Now it's closed, due to a rigorous fire inspection which has stalled progress. Here's the newspaper account of the closure.

Not long ago, the volunteer enthusiasts opened the Heritage Cafe, in the main floor museum area, a way to bring folks into the building. It worked. There's a great community feeling here. Another lunch visitor and I were brought onboard with the struggle to retain the community theatre space, given lunch and a tour, introductions to the student assisting with digitizing the photo archives. Homey. Grassroots. Kind of the way things started here. Turns out, they're likely to continue. 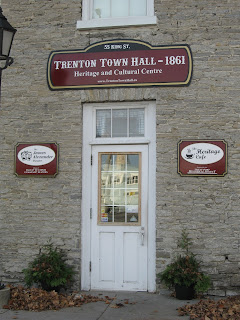 Last week, representatives pleaded their case with council. Everyone was hoping that this city-owned building, the only area museum interpreting Trenton's important industrial and railroad history, might get some support. Seems that the pavement, parking lot and playing field budget will stretch to rescue the old Market Building and its initiatives.
Last week, on the Facebook page of the Museum, came this announcement:
"It gives us great pleasure to announce that there will be a museum, cafe and theatre at Trenton Town Hall - 1861 for our future pleasure. The City Council Meeting went very well and the outcome was in our favour. IT WAS VOTED AND PASSED THAT THE CITY WILL LOOK AFTER ALL THE REPAIRS IN 2016 For the winter months we will be able to continue with the city looking after the utilities. Stay tuned for future developments."

And we shall folks. Well done.
Posted by Ancestral Roofs at 6:45 PM