Veteran of many Wars 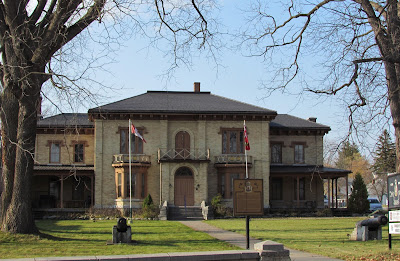 Why indeed? I ask myself.

Friend and regular (ahem) AR visitor Larry posed a question yesterday, which led to some musing about this wonderful buff brick building in Picton .

Although it has been home to the Royal Canadian Legion Branch 78 Picton since 1949, I knew it as the Walter Ross house, growing up. It's quite magnificent, really, seen through the eyes of Stokes and Cruickshank (The Settler's Dream, p.264ff.) For some reason 'white' brick has never appealed much to me, a red-brick Picton girl) and I have only one photo of this historic house in my files. Must do it more justice in a future visit.

And the question, just to get that out of the way, is "why is the Legion for sale?" My immediate response was:  Legion numbers are declining (although the number of Canadian vets continues to rise) and the local membership can ill afford the costs involved with maintaining a 150+ year old house. Indeed, a quick search yields a CountyLive story dated January 2011, about astronomical roof repair costs.

Built around 1863, this weighty house has seen many changes in fortune. It was built by Walter Ross, successful merchant, mayor, MP,and president of the Prince Edward County Railway (formed 1879, renamed Central Ontario Railway in 1882, and we all know the rest.) All in all, a substantial gentleman, with a matching house. In 1878, remarkably, Ross went bankrupt and the house reverted to trustees; it was purchased in 1884 by American George McMullen, who also had wide railway interests. According to SD, it was McMullen who had "exposed the CPR scandal which toppled Sir John A. Macdonald's government in 1873." After his death, the estate was sold in the 1930's to Dr. Stephen H. Roblin, who sold it to the Legion in 1948. The Legion has cared for it well, adding a modern wing; the real estate listing describes a  property suited (due to its architectural significance in addition to its commercial kitchens, etc.) to a boutique hotel or other institutional venture.

I hope the prospective buyers fully appreciate its features. Here's a Streetview link so you can have a wander.  In photos dated 1972 and pre-1984, the verandahs on the flanking wings show only as building scars. Thanks to the stewardship of the Legion, they had been replaced by the date of  my 2013 photo. In a trade-off, the wonderful triple-stacked chimneys atop the hip roof, shown in 1972, have been missing for a long time.

Details like the heavy cornice brackets, hood mouldings over the three-part windows, the bay windows, the brick vestibule with massive round-headed double door, echoed by the second floor central window leading to a balcony. It's a ponderous structure with its bull-dog symmetry, lightened somewhat by projecting/receding planes. And then there is the stone stable wing, those magnificent expansive lawns, the stone wall, the massive old walnut trees.

Looking forward to the next posting for this old soldier.
Posted by Ancestral Roofs at 1:07 PM