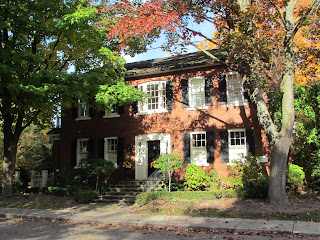 Again I rely on Mary Byers and Margaret McBurney to paint pictures of early Oakville. I'll trail along behind with some 2 year old photos. On the first page of their extensive treatment of old Oakville in The Governor's Road (University of Toronto Press, 1982) the writers describe the hive of industry which was the lakeside town. "The impetus for Oakville's rapid growth was the shipbuilding and shipping industry which was well established by the early 1830s. 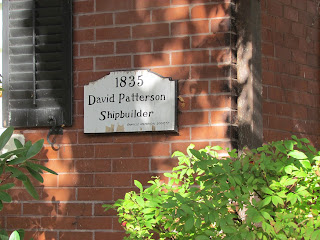 The Canada Directory for 1857 listed fifteen ships captains whose residence was Oakville, plus others described as shipbuilders, ship owners, ship's carpenters, ship's caulkers, wharfingers, and a wide variety of artisans whose work was tied to the shipping of grain."

One such house is the 1835 David Patterson house, built in frame, veneered in brick in the 1880s. David Patterson was of Scots descent but born in Belfast, where he apprenticed as a shipbuilder and carpenter. He came to Oakville in 1827, into the employ of the Chisholm shipyard, and built this house with its basement stone bake oven upon his marriage around 1835. 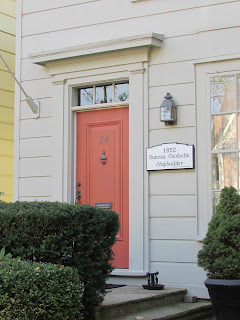 I recall learning, when we visited Lunenburg and Mahone Bay, that the towns' finely crafted and richly ornamented frame houses were in many cases attributed to ship's carpenters who made productive use of their time ashore. The same is readily evident in Oakville. I say that, not because I have a keen eye for the shipbuilder's touch along a residential street, but because many of Old Oakville's homes sport distinguished plaques identifying their age, and original builder/owner. Brilliant! 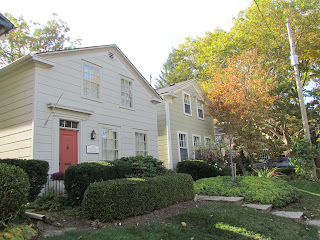 Admire with me the fine classically inspired doorcase of one of shipbuilder Duncan Chisholm's c1852 homes. It sits between two other frame houses which I seem to recall are attributed or associated with seafaring folk. Have a look. For some reason, I didn't capture the fine double house.  The Walker's Guide recounts that they were built by ship and shipyard owner and master mariner Duncan Chislom (son of George, founder William's brother) in 1852 for his shipyard workers. 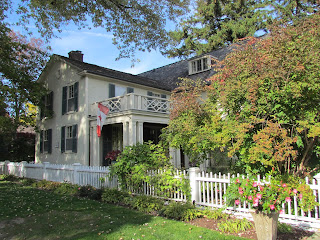 Next is the 1830 house of Captain William Wilson. A plaque on the deep porch with the distinguished half-pane sidelights and transom reports that by 1854 it was being called 'Glenorchy' the home of  Peter McDougald, grain merchant and later mayor.

The Walker's Guide is mum on the subject, but fortunately Byers and McBurney reveal the association with yet another sprout on the Chisholm tree (there were eleven, not all thrived), Mary Jane, the seventh, who married Peter MacDougald, a  young Oakville businessman, partner in a grain-buying business. 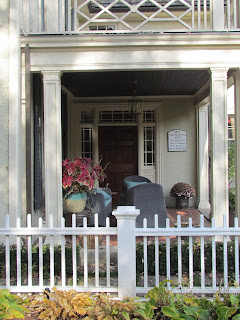 The house has sprouted wings and undergone updates, but its massing is concealed by luxurious growth of trees and shrubs. No matter. The lady writers explain that the couple's small house purchase grew a one-storey addition to the rear, and French doors. Later a second storey addition grew over one, then both, wings.

Of Peter, we will say little. "An overindulgence in one of the byproducts of his grain business," the authors suggest, led to some dramatic confrontations.

He left, however, a sublime and dignified home. 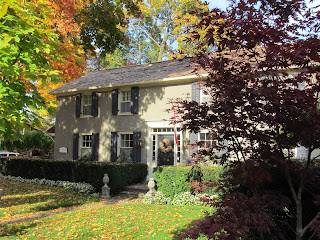 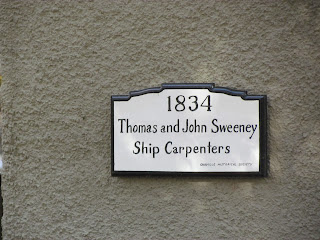 This refined 5-bay Georgian clad in stucco is the 1834 home of Thomas and John Sweeney, ship carpenters. The plaque gives us that.

I found little else but a newspaper announcement of a 2002 Heritage House tour (nice rendering) dubbing the Sweeney house one of Oakville's oldest. Missed the tour, but I can do the math.

Here is a worthy trio to finish up the tour.

Is Old Oakville a Heritage Conservation District? Oh my yes. Since 1981. Have a look at the Canadian Register.

Unless otherwise indicated, all the 'house stories' come from The Walker's Guide to Old Oakville Heritage Houses, produced by the Oakville Historical Society in 1994. 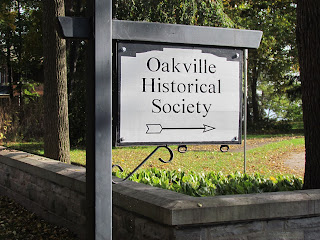 Posted by Ancestral Roofs at 8:56 PM