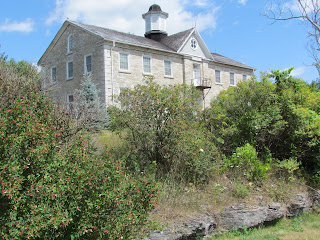 I'll never forget the first time we entered Newburgh, from the west, along Lennox and Addington county road 11. We were enjoying that regenerative feeling that comes from meandering through wide open farmland, past houses and barns hinting at their proud farming past, with the occasional massive elm tree for perspective, when the road began to dip into a richly-treed hollow. Traffic (which wasn't hurtling at the best of times) slowed to 50kph and to the left, atop a cut in the shaley limestone, stood this majestic structure. Traffic (our contribution to it at any road) stopped. You can try the approach yourself via Streetview. There is a clue, peeking above the treetops. 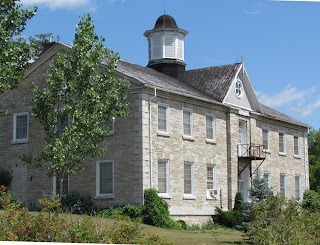 This is Newburgh Academy (1853.) Now it's not looking its very best here and there, with parked vehicles and bins attesting to residential use. But it still commands respect, in that haughty cool Georgian manner, on the brow of the hill above the village.

But when this school was built, it was scaled to fit with Newburgh's great expectations.
Once an industrial mill village of some significance, supporting a vibrant farming community in the fertile Napanee river valley, Newburgh was prosperous by the 1820s. Sawmill and grist mill growth began then and grew, thanks to the obliging Napanee river. The village specialized, with foundries, cabinet-making and carriage-works, a  woollen mill and cheese factory  and even a paper mill. (I wrote about the Thompson paper mill last November.) A substantial commercial district. Shops and hotels. Churches. 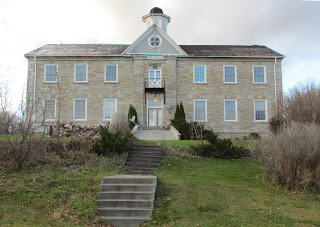 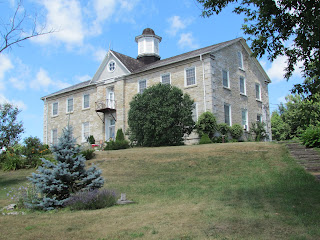 I like this description of the town's great expectations, from Rogues' Hollow: (Stokes, Cruickshank, Heaslip, ACO, 1983)

"It was one of only six such institutions in the province. The status of the Academy grew and by 1844 it was reputed to be one of the leading schools in Canada West."

This was remarkable when you consider that a research paper I found (have a look) reports the average daily school attendance almost 60 years later was 61% (in 1900) and that boys and girls often left by 9 or 10 to work at home or in factories.)

Fire (no friend of Newburgh)  blighted the Academy's beauty. In 1872, renovations contributed a new entrance (now modernized), gable and cupola. The good news is that since the book was published, an unlovely fire escape crossing the facade has been renewed. The bad news....a photo taken for the 1983 book shows now-missing bargeboard and a finial in the gable

Attendance, once strong, fell off when the high school students moved to Napanee in 1952; the Academy closed for good in 1965. But the good news? It's still standing.

In the 1850s Newburgh had aspired to be the  seat of government for the new-born Lennox and Addington county, but the port of Napanee with its lake access was selected. Next, the new Grand Trunk railway passed it by. Five major fires followed. In 1887, eighty-four buildings burned. Imagine the heartbreak? Most of Main Street was destroyed. The decline, once begun, continued.

The up side? As Cruickshank et al explain it, "the lack of growth in Newburgh in this century has ensured the survival of most of its historic buildings and streetscapes." It's an ill wind that blows nobody good. More on my journeys through Newburgh later.
Posted by Ancestral Roofs at 7:55 PM