Friend Larry mentioned a name this morning, which took me straightaway to Deseronto, and the Rathbun family. The Deseronto Archives contain large numbers of photos of the early days of the town. Their Flickr site makes them accessible.

This talk by then Deseronto archivist Amanda Hill includes a poem which serves as a tour of the town at its industrial peak. One line in her presentation captures the imagination. "All these industries were owned by the Rathbun Company and nearly everyone living in Deseronto was working for the Rathbuns." 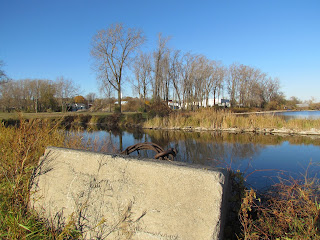 This phenomenal album on the Flickr site of the Deseronto archives gives an even better sense of the extent of the industries operated by the Rathbun family. Here's another, photos donated from the estate of Edward Wilkes Rathbun's eldest son. 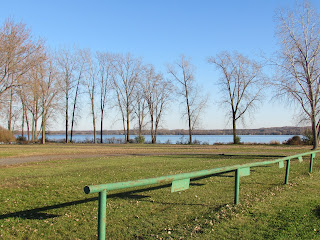 I've written about Deseronto before; this post contains a few more 'memories' of the Rathbun family. This interesting article in the Whig, written by Susanna McLeod in 2014 provides a much better summary of the empire than I could put together, and instantly too. 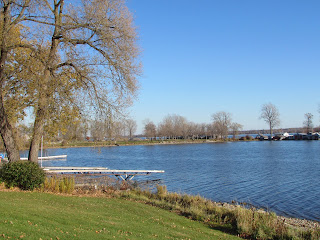 This walking tour, created by Amanda also, will get you around town, and may even help you to appreciate a point which puzzles me.

One tiny fact in all of the material I've read about the Rathbun industrial empire in Deseronto intrigues me more than any. Rathbun's house. Rather than choose the tony neighbourhood on the hill, where he could look down on the bay, his industries and his fellow man, Rathbun chose to build his home on the south side of Dundas Street, the centre of town. 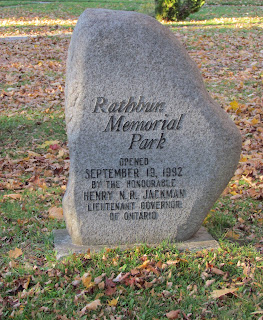 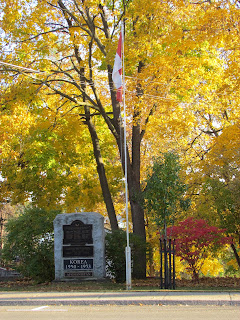 Today Rathbun Memorial Park provides shade and a seat, across the street from the site of the home. The town's war memorial occupies the site of the rambling frame Rathbun house on the edge of the hill dropping to the harbour.

From the south-facing windows (doubtless one of them would have been his study) Rathbun would have enjoyed the view of the bay, his wharves and his factories. And he could see that it was good.
Posted by Ancestral Roofs at 5:03 PM