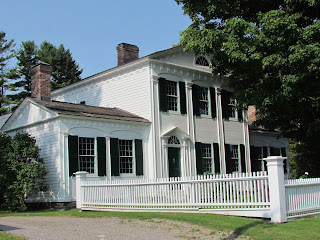 Anyone planning a trip to New Zealand (squeal) will note with interest that one Eric Ross Arthur was born in Dunedin and distinguished himself at Otago Boys High School - and gathered honours later at the University of Liverpool School of Architecture. 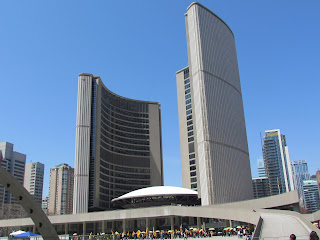 What might not be apparent is his importance to the two somewhat different structures here. During the Great Depression, Arthur, a respected professor of architecture at UofT, and a "highly opinionated [and] observant student of contemporary Canadian design"* purchased the endangered Barnum house. Bankrolling the 'money-pit' led to the formation of that force for good, the Architectural Conservancy of Ontario.

It's a measure of Toronto's confidence in him that Eric Arthur 'refereed' (Richard Longley's words; check out his article on Eric Arthur in the Spring 2017 issue of ACORN) the team of architects who selected the design and designer (Viljo Revell) of Toronto's eye-catching City Hall.

But it's Eric Arthur's passion for the early buildings of Ontario which likely endears him to the readers of this journal. Arthur photographed hundreds of early structures; many of these evocative black and white photos of vanished ancestors can be visited in The Settler's Dream - the rest at the Ontario Archives. On my list. Not only that, but in the middle of his modernist designing career, he managed to write about our built heritage. Two of my favourites are The Barn, and Toronto, No Mean City (the links take you to old posts where the books are mentioned.) Both titles are widely available at collectible and rare books dealers online. As are others - succumbed just now to two I read about here* just now.

And there's more, more relevant to the story I want to tell. Over more than a decade beginning in 1927, while Eric Arthur was capturing our vanishing heritage on film (yes, film) he commanded his architecture students to create measured drawings of significant eighteenth and nineteenth century structures in the province. Sadly, so many of them have been demolished, or changed beyond recognition.

But one has persisted. This house has been turning heads for years. We almost lost it. A photo in Blake and Greenhill's 1969 Rural Ontario shows a weathered unpainted structure "in some danger of destruction." 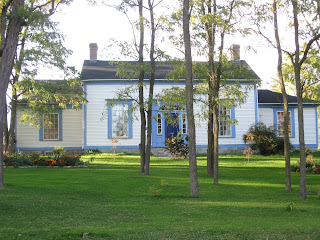 Homesteads, by McBurney and Byers (1979) describes Peter Davy's  "handsome" "neo-classic" 1819 home thus: "the house stands empty and desolate. At one time it was undoubtedly the finest in the village."

But here's where Gus Panageotopoulos comes in.
We met Gus -  Shannon, Sabine and I -  on a 'classical' tour back in 2014. Not sure if Gus is the sole old house hero in the story, but Shannon quickly established that the windows were 'safe' with a knowledgeable owner . And so they were. Today, the reveal.
Gus emailed this week, to share photos of the work of D.J.White Restoration of Hartington, the restoration of the magnificent door surround, and windows of the fine house. And it was Eric Arthur's measured drawings to which Gus and David turned, to effect this transformation. 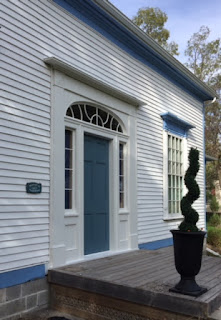 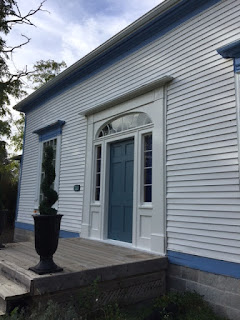 I can't  find a website for DJ White, but his name comes up on heritage building consultant Craig Sims' site. Another link features photos of David White's work on Ham House. DJ White of Hartington is in the right place, with Bath's early built heritage to preserve. One day the village may wake to the realization that its history is the key to the future.
Posted by Ancestral Roofs at 4:22 PM