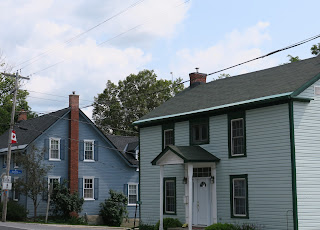 Somehow we've always missed Burritts Rapids. We've made return visits to Manotick and Perth and other stone towns along the Rideau. But not until we  established a Rideau River base-camp this past summer (sob) did we begin to explore the villages and hamlets along the waterway. On a day which began in Pierce's Corners (a quite impressive collection of early buildings to admire) we puttered along North River road, ending up at Burritts Rapids.

Burritts Rapids is a hamlet bypassed by a busy County Road 2 (although those with 'the eye' might spot the early proportions of the two houses on either side of Burritt's Avenue, the route into the village.

The simple Gothic church is an eye-catcher, and the plaque-reader might be enticed to tarry. Just one look down the hill across the river and we were hooked.


This village without 'un commerce' as Queensborough friend Katherine has noted, may be lacking one of the engines of prosperity, but its unspoiled beauty (but for some declining structures) and early homes still much loved by its history-aware inhabitants keep visitors coming.

Stephen Burritt, wife Martha and brothers Daniel and Edmund arrived from Vermont in 1793. The subsequent creation of the Rideau Canal turned his bush grant into a transportation hub, and his land was subdivided into town lots. Burritts Rapids provided the first bridge across the river.


The usual rags to riches to rags story ensued, with mills, shops and services springing up. 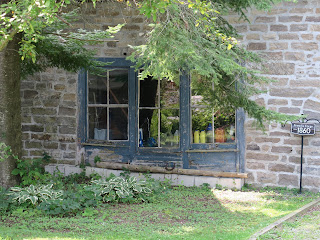 In one of those left standing at the altar events that happened to hopeful towns bypassed by the new railroad in the mid-1800s, Burritts Rapids lost its key transportation link status, and slipped quietly into....well, the hamlet slipped quietly into the little-changed truly delightful spot we visited this summer. Full of historic houses, canal-side structures, historic plaques, and welcoming folks.

A walking tour guide created by Pat Stroulger in 2005 opens the history book. Burritts Rapids walking tour is available online, so you can print one out and go see for yourself. See if you don't agree with us. 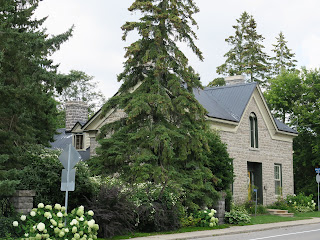 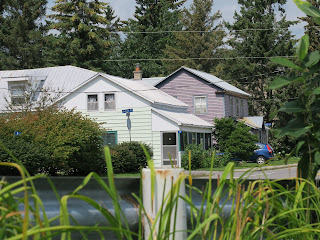 According to our guide, "by the mid-19th century the hamlet boasted several mills, a tailor shop, hat shop, two shoe stores, a bank, post office, two hotels and even a resident doctor." 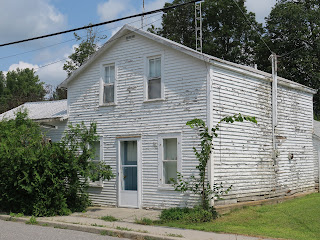 Another history adds telegraphic and daily mail, a bakery, a millinery shop, a tin and stove store, a grist mill, a woolen mill, a tannery, three blacksmith shops, three wagon shops, a cabinet shop, two churches, two schools and an Orange Lodge to the record of untrammeled growth of the hamlet. 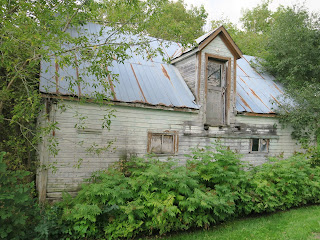 An aside for apostrophe angst. Did this town founded by several members of the Burritt family not start out as Burritt's Rapids? And does the road out of town show as Burritt's Avenue? Then why do the maps show Burritts Rapids. (Don't reply. Rhetorical question.) 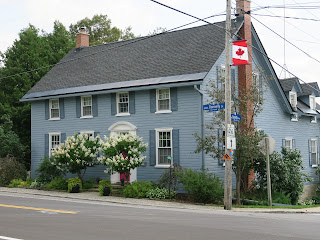 In spite of all that, don't you want to go? We want to return. Wonderful house history. A tranquil place along historic Rideau Canal. Lots of nature - a park, ancient trees, a walking trail. And the experience of island life. For Burritts Rapids became an island when those intrepid canal builders hacked a safe passage around the Rideau River rapids at this location 175 years ago. Quite the pick and shovel feat.
Posted by Ancestral Roofs at 5:57 PM