This was to be another 'back to school' post, but somehow September got away from me. This photo keeps popping up on my screensaver slide show, so I must spend a moment in memories - and why not take you along? 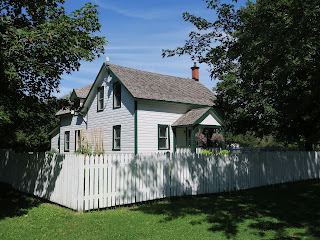 I may have mentioned before that I set out for Carleton University in 1965, a green farm kid who found the academic and social demands of the school a bit overwhelming. While visiting Ottawa this August, and revisiting many of my old haunts, I was drawn to this spot.

One place where I felt at home was the Arboretum of the Central Experimental Farm (more on that later) a delightful domesticated 'wild space' along the Rideau Canal. Bridges and water reflections, meandering paths through hilly terrain, benches, lawns and gnarled old trees for sitting were a balm to my soul and allayed my culture shock a bit.

Add to that the history resonance of the lockmaster's house and the operational locking system at Hartwell Locks, and how could a 2PM lecture begin to compete? 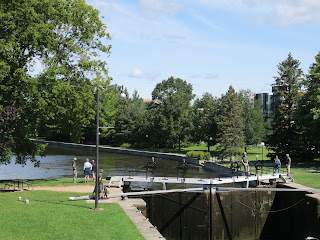 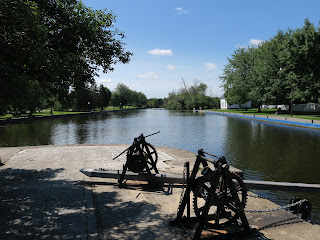 The visit to Hartwell's Locks was the final stop in a summer spent visiting a number of well maintained Parks Canada locations in and around Smith's Falls, Perth, Merrickville and Burritts Rapids. I realize to my chagrin that I have not yet posted those wanderings.


But back to school for a moment. 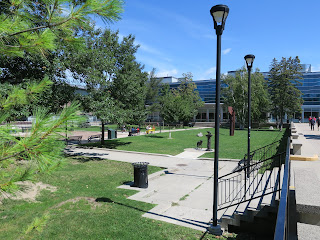 Carleton was nearly as new and undeveloped as I was in 1965. The Rideau River campus had just opened five years earlier, with the Henry Marshall Tory (Science) and Norman Paterson (Arts) buildings, and the Maxwell MacOdrum Library, planted on three sides of a 'quad' - central to both the early campus and the life lived there - planted with equally new trees. 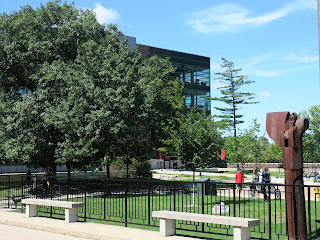 In 1963 the campus added a place for me to sleep - Renfrew House, once of two student residences - and Southam Hall, containing pretty intimidating steeply raked lecture theatres (no place for me to sleep.) In 1965, Carleton added the C.J. Mackenzie Engineering building - and little me. (No, no, Arts all the way.) The brick pillar of the Dunton tower was opened in 1970, the year I topped off my degree with a couple of night school English courses. I recall that the campus was under construction for most of my time at Carleton. 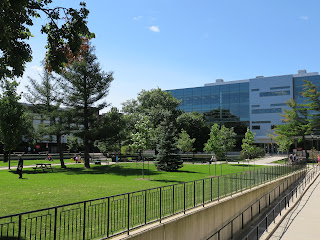 The old photo above appears in a fascinating post on a blog written by a student at Carleton in 2013. The blog appears short-lived, so I can't contact the writer to determine how to credit this very early (1965?) photo of Carleton. I hope no-one minds. Do read Mike Chiarello's post, and enjoy this photo of a tiny new university (which is still, after 47 years, still contacting me for support.) 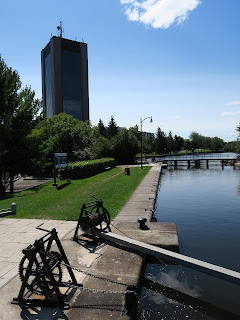 I had a wander around the 'quad' enjoying new sculpture and the swing in one of the now giant maples in front of the totally remodelled library. Had a chat with a prof's waiting wife. Recognized that the place no longer held any dominion over me. And wandered back over the Hartwell Lock, hopped into to my waiting car, and headed back along River Road to my campsite on the Rideau. 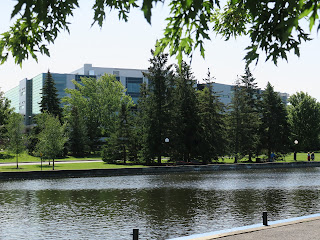 'Best years of your life,' our Dad (who had to leave school in Grade 7 to run the farm) used to say of high school and uni. Wish he were still here to debate the point with me.

There. Isn't that better? Angst-free zone. University life, seen from the other side. Through the rear-view mirror. 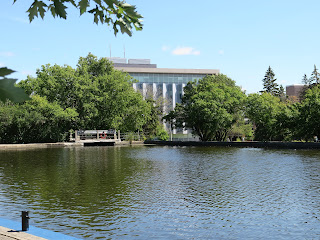 Posted by Ancestral Roofs at 9:10 PM