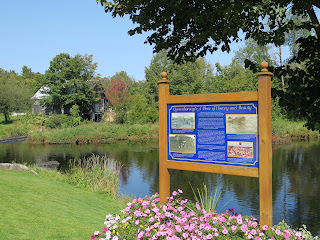 Well done citizens of Queensborough ! I'm sure you're still pinching yourselves. Months of preparation are behind you, and I'll bet you're still savouring memories of an outstanding community festival.

Katherine Sedgewick, daughter of the Manse, and one of the hamlet's faithful boosters, shared everyone's delight in a recent post on her lovable  blog Meanwhile at the Manse. 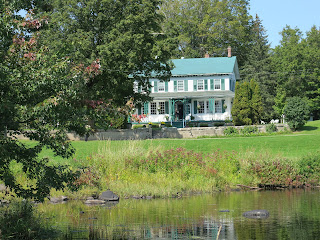 Three Sundays ago this charming hamlet celebrated its second Queensborough Open Doors day. I got to experience a bit over an hour of the event, due to the distances involved with making my way from Presqu'ile PP where I was camping, along several roads less travelled (and a couple of plain wrong turns!) 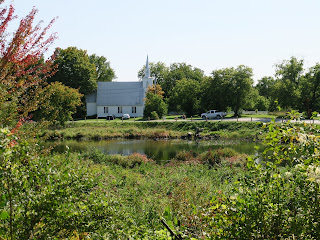 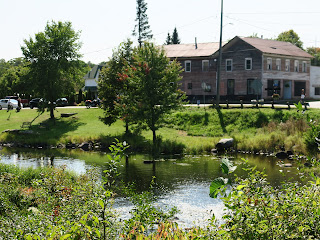 I was gobsmacked on my arrival, to see streets and the edge of the millpond lined with cars, groups chatting on the lawns and storefronts, people strolling higgledy-piggledy (put me in mind of a summer Sunday afternoon at Lake on the Mountain!) through the streets gussied up with flower pots and signage depicting the village's history in text and evocative old photos.


Two teams of horses ferried people to a number of destinations, where hosts shared even more displays of town and area history. 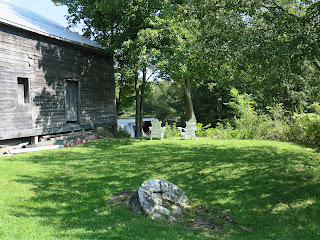 I encountered numbers of folks I know from history circles, and met many lovely people: folks whose roots go deep into the community, like the fellow from Ottawa, whose mom grew up on nearby Bosley Road, and Sally who was visiting to share the enthusiasm of friends who have recently become owners of the old Loyal Orange Lodge. 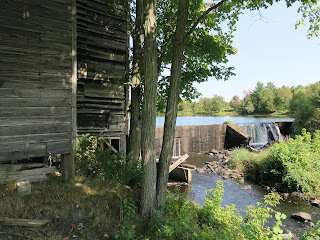 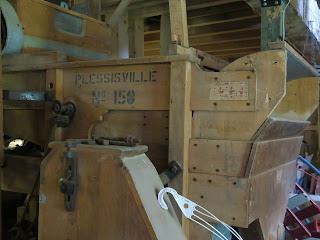 What a treat it was to walk up the gravel lane to the old c.1840 Daniel Thompson mill, to explore the riverbank and snoop around inside. The familiar wooden industrial equipment of early grist mills recalled my visit to the Mill at Piper Creek in Castleton, not too long ago.

And the resident cat, a charming young tabby, greeted all comers (including the wary dog Lucy) with just the right amount of proprietary aloofness. 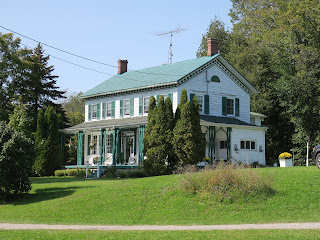 I still cannot believe I crossed the threshold of this exquisite house and got to explore the main floor. Like the others crowding the centre hall, I was enchanted by a three year old who dropped to the carpet without prompting to remove her bright-coloured crocs, and tiptoed into the principal rooms of the c1850 Daniel Thompson house, now home to another Queensborough booster of many years Elaine Kapusta and husband Ludd.

The walking tour guide produced by the local Community Centre is a treat; you can obtain one by email or phone. To assist you to plan your visit (because if you haven't been, you must), you can visit Queensborough's website or their Facebook page.


I fell in love with this large frame building with Greek inspiration when I first saw it on a sleety November years ago. It's one of my Hastings County favourites.

By the way, it appears in the Autumn issue of Country Roads magazine,  one of 10 county buildings I photographed (and located historic photos of) which were already in operation by 1867. 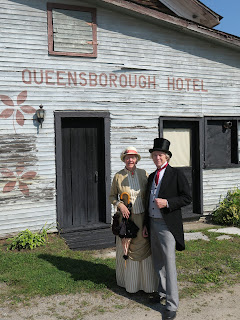 Appropriately, I caught up with Sir John A and the missus in front of the hotel. They added the touch of class this tired but fine structure seems to need. 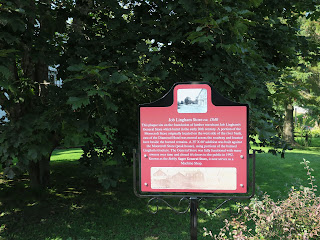 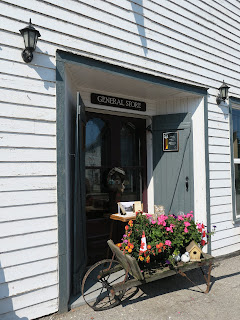 As all good downtowns should, Queensborough once had rival stores facing each other across the dusty street. This wonderfully maintained white frame building was once Sager's General Store, which closed finally in 1991, after many decades of serving the community.

Its story is told on the historic plaque standing on an historic foundation in the beautifully landscaped lawn. The store began its life in another building, as Job Lingham's store around 1840. This first store burned, and a second structure was moved onto the site. That building and addition housed both the Sagers and their store, and is now the home and residence of  Jos Pronk, machinist extraordinaire, and wife Marykay, two more of Queensborough's enthusiastic and hard-working boosters. 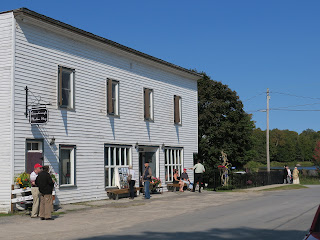 All around the hamlet, places had been spruced up for the big day. A neighbour astride his 4-wheeler told me the story of the 1872 Methodist church which once stood at the top of now empty steps. I'm told it's alive and well in another community.

Later, Raymond (of the Manse) shared the story of a local teacher who died in WWI, whose initials can still be seen carved into the stone steps. 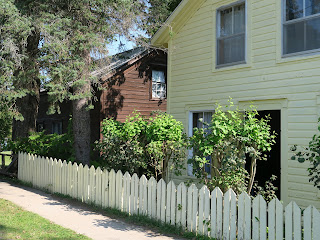 A streetscape rivalling Upper Canada Village - the difference is that these are real old neighbouring houses, with resident owners. The yellow house is Daisy Cottage, being restored by Julie, a new (and doubtless welcome) addition to Queensborough.

Next door, is the brown painted Kincaid House, one of the oldest homes in the hamlet. There's something so evocative about it. The photo shows Raymond (recent new owner) welcoming visitors. 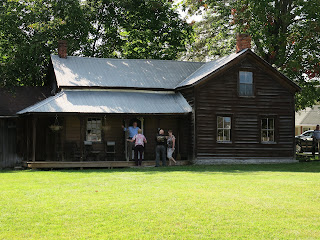 For some reason (likely because I was deep in conversation) I missed taking a photo of the St. Andrews United Church Manse all gussied up for company. But you can read its story, starting with this 2012 post recording its purchase by Katherine and Raymond, on Katherine's blog. 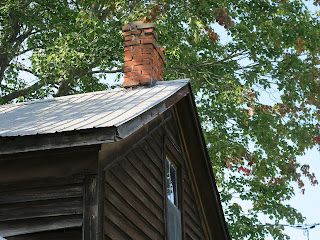 New boosters have been added to the Q'boro team. Just recently, the rather decrepit Loyal Orange Lodge 437 has been purchased by a dynamic couple whose plans for the wonderful old building include a community cultural space.

Jamie and Tory have cleverly adapted the historical LOL (which sometimes evokes the nasty religious tensions in our past) into today's text message abbreviation. And for sure there will be lots of laughter in the old hall in time to come. Their clever sense of humour (and design) is evident in the logo sported by their pick-up truck.
Here's a great history of the hall, in Meanwhile at the Manse.

Had a great day in Queensborough. The little village that could.
Posted by Ancestral Roofs at 1:27 PM