Gage House - the Place we Won the War 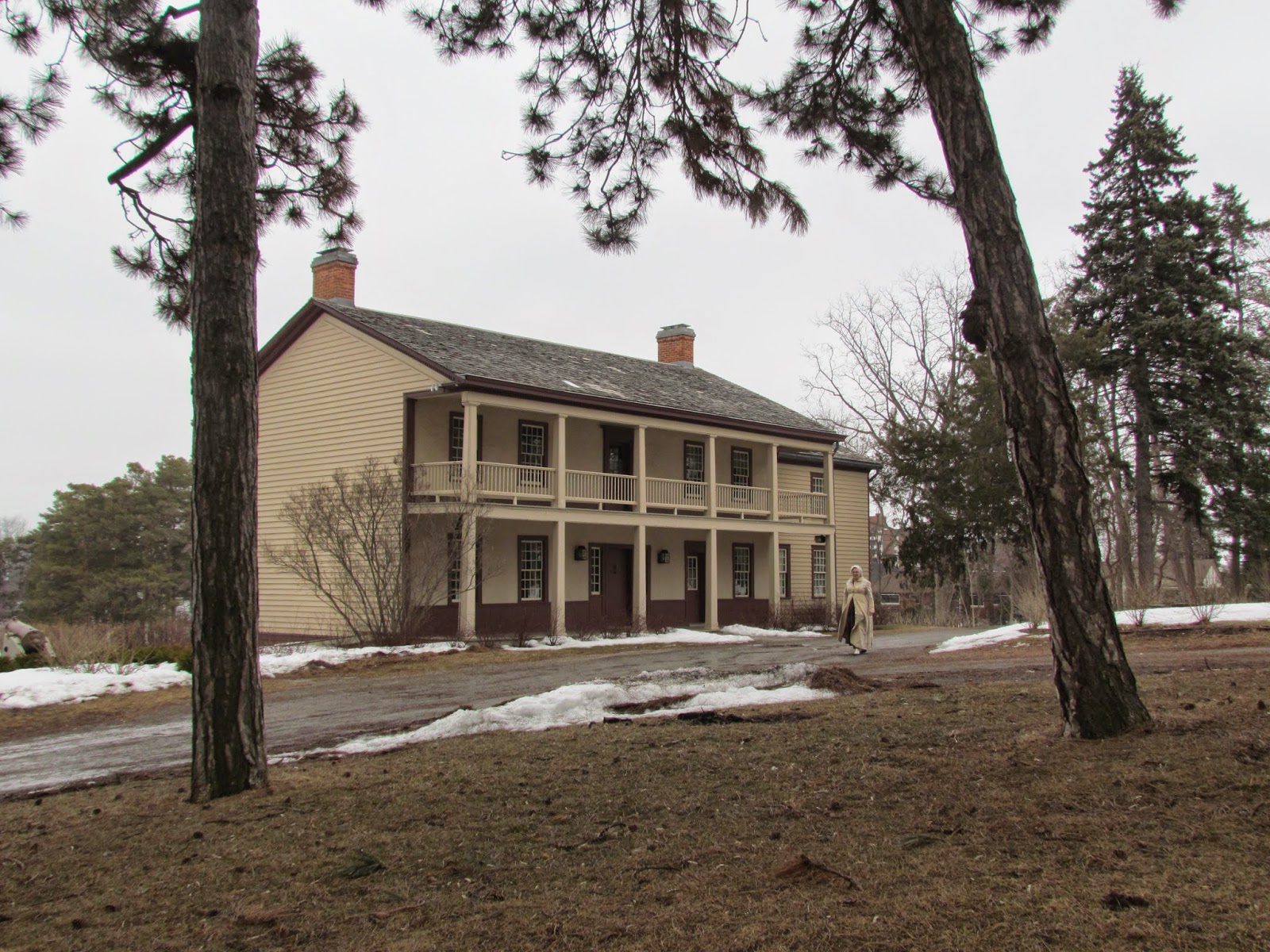 Last year I started a 'series' of posts on historic homes within a day's journey of our city, Belleville. After years of thinking about it, I finally got inside Bellevue in Kingston, Proctor House in neighbouring Brighton, and the very early Fairfield House in Ernestown just west of Kingston. 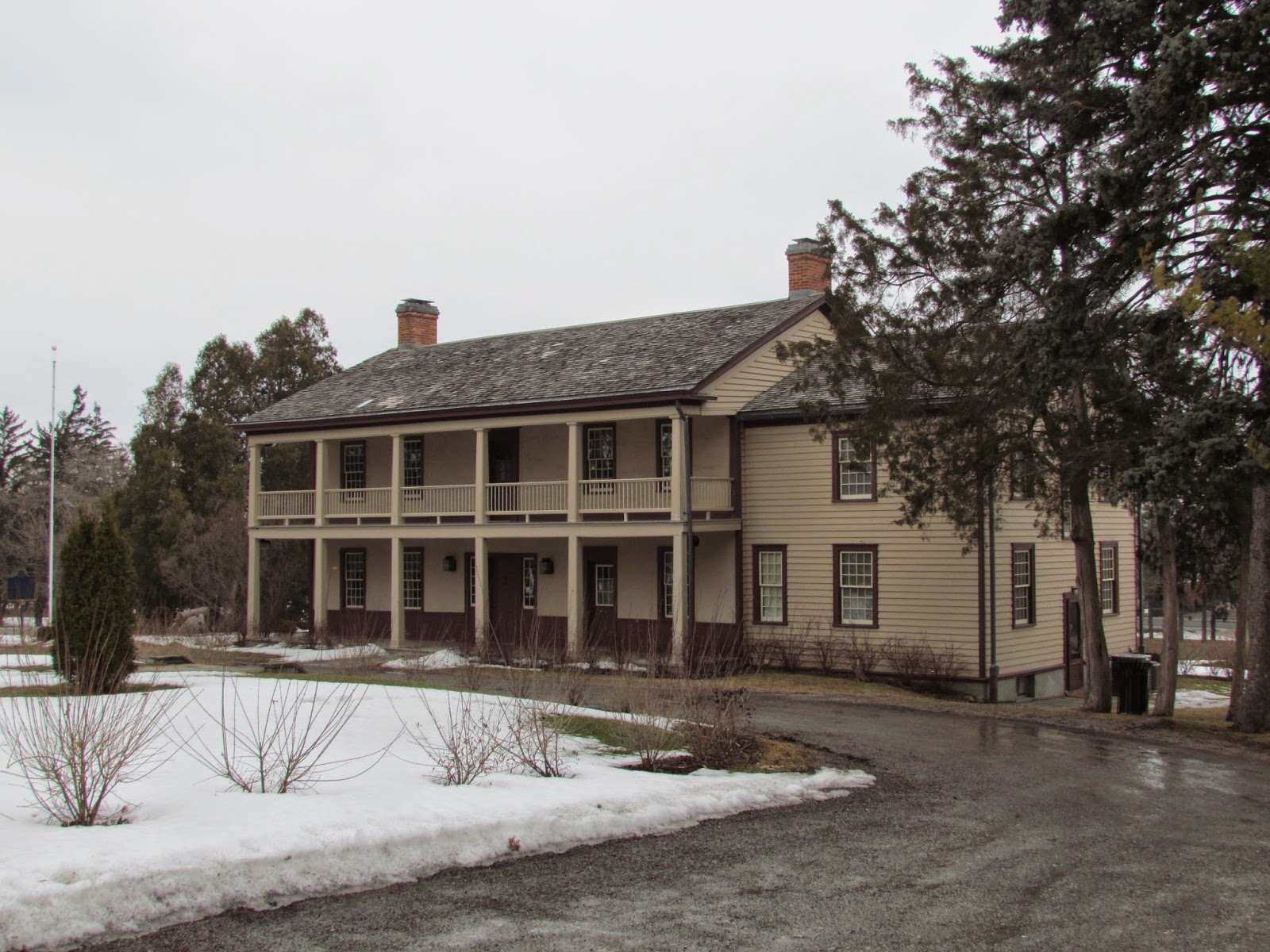 Here's another. This past Saturday, my inamorato had occasion to hold a business conversation in Stoney Creek Ontario. As always, in return for my company and occasional navigating services, I was treated to a stately home visit, and some bashing about town looking for impressive spots to photograph (an easy thing to arrange in Hamilton.) I did some quick online research, and found all that I needed to occupy two hours and my rapt attention at Battlefield House Museum and Park.

Granted the cold drizzly foggy weather didn't lead me to explore the entire scenic 32 acres, but I was in old-house heaven. Not one, but two Georgian style frame houses, impeccably restored to National Historic Sites' standards and interpreted in the same faithful manner. (I wrote about the Nash-Jackson house, this home's 'cousin' here.) 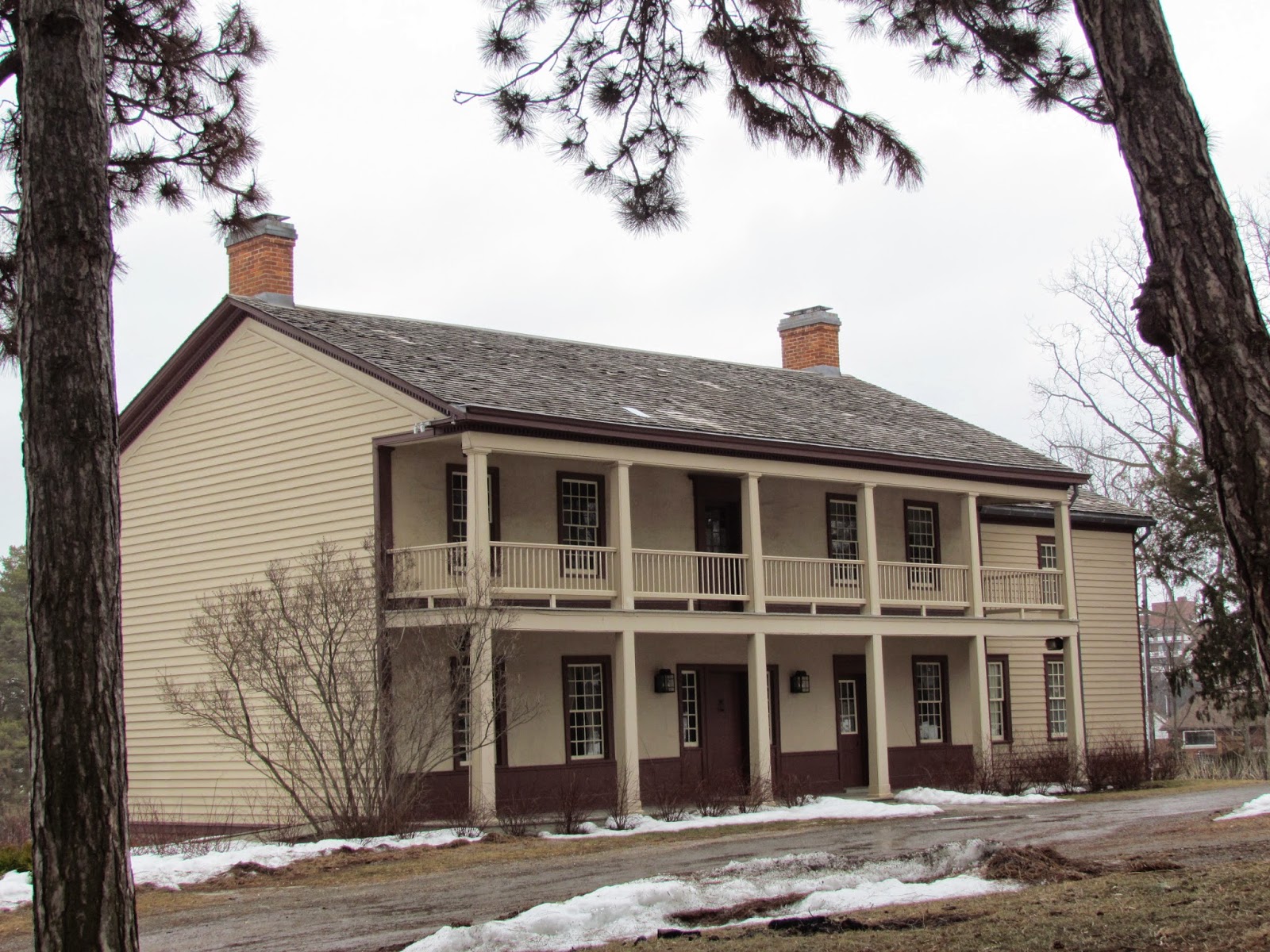 One of the great things about official historic sites is guided tours which actually let one inside the doors of  important early homes. The opportunity to enter the life of the time, to see furniture and finishes, decorative arts and paintings - and to talk with experienced interpreters about the house, its people and its story - is one of the best ways to spend an afternoon.

Of course, for me, the first attraction of Battlefield House and Park was the Gage House, for my heart is drawn first to built heritage. Only later was my head turned to the important historical event which took place on this property, and indeed, within the walls of this house.

The serene and beautiful interiors of the mid-1830's were impeccably recreated in bedrooms, keeping room, pantry and parlour. The centre hall was being researched, original stencilling uncovered and plaster stabilized. A great (though likely not surprising) discovery was that Rod Stewart of Historic Plaster Conservation Services is the historic plaster expert undertaking work on both floors of the house. Rod did the consolidation and cleaning of Glanmore's ornate ceilings in 2012. (Here's a link to  the Spring 2012 issue of County and Quinte Living magazine about that project. It's on page 44.) 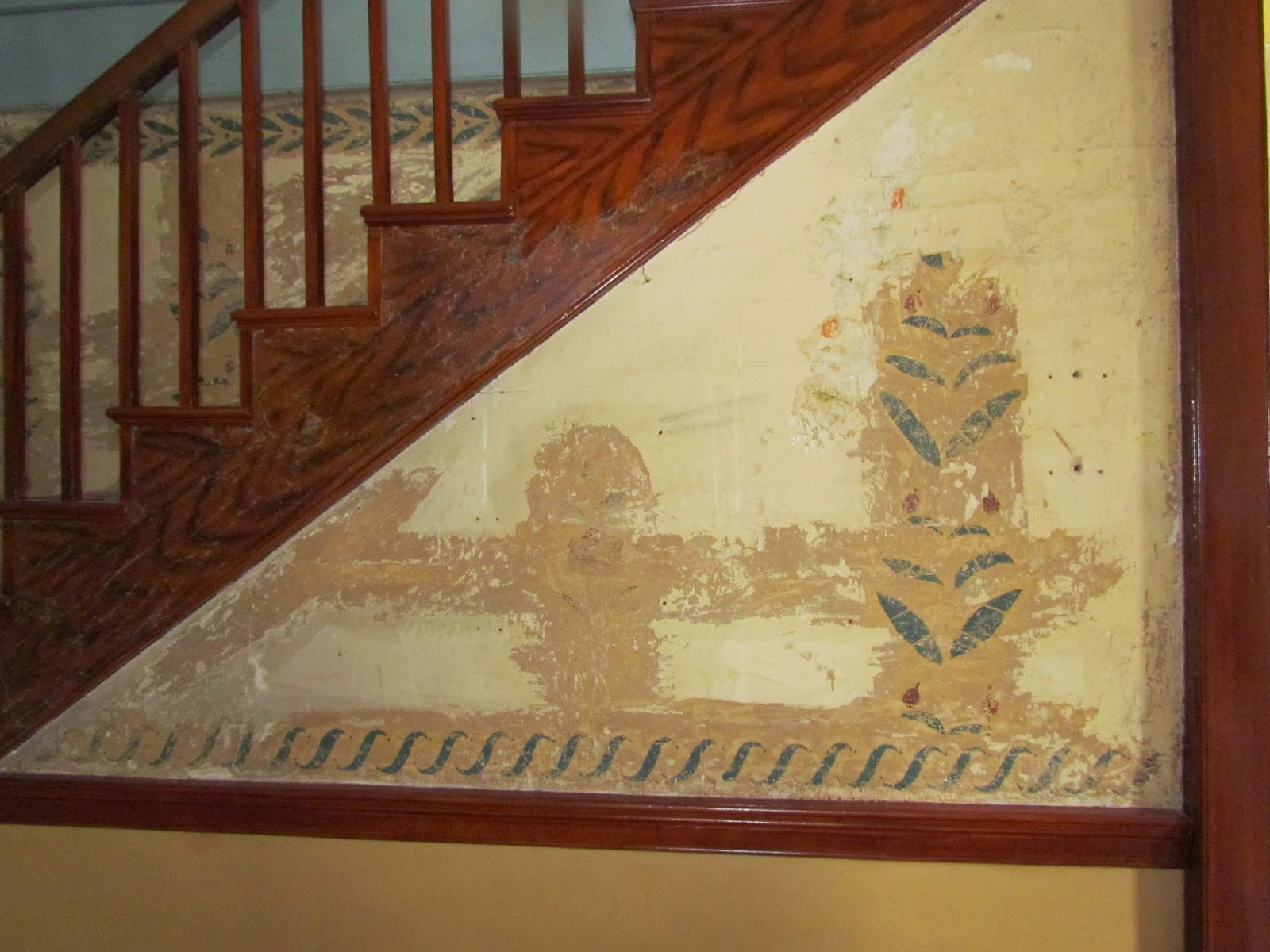 Gage House is as much the story of the indomitable Sarah Calder as it is of the James and Mary Gage family who settled here in the early 1800's (and were occupied and imprisoned) during the War of 1812 battle of Stoney Creek.

Sarah Calder was the grand-daughter of James and Mary Gage, and a heritage force for good. As founder and president of the Women's Wentworth Historical Society, in 1899 she purchased this house  to interpret the life of the earliest settlers and their brush with this formative war. 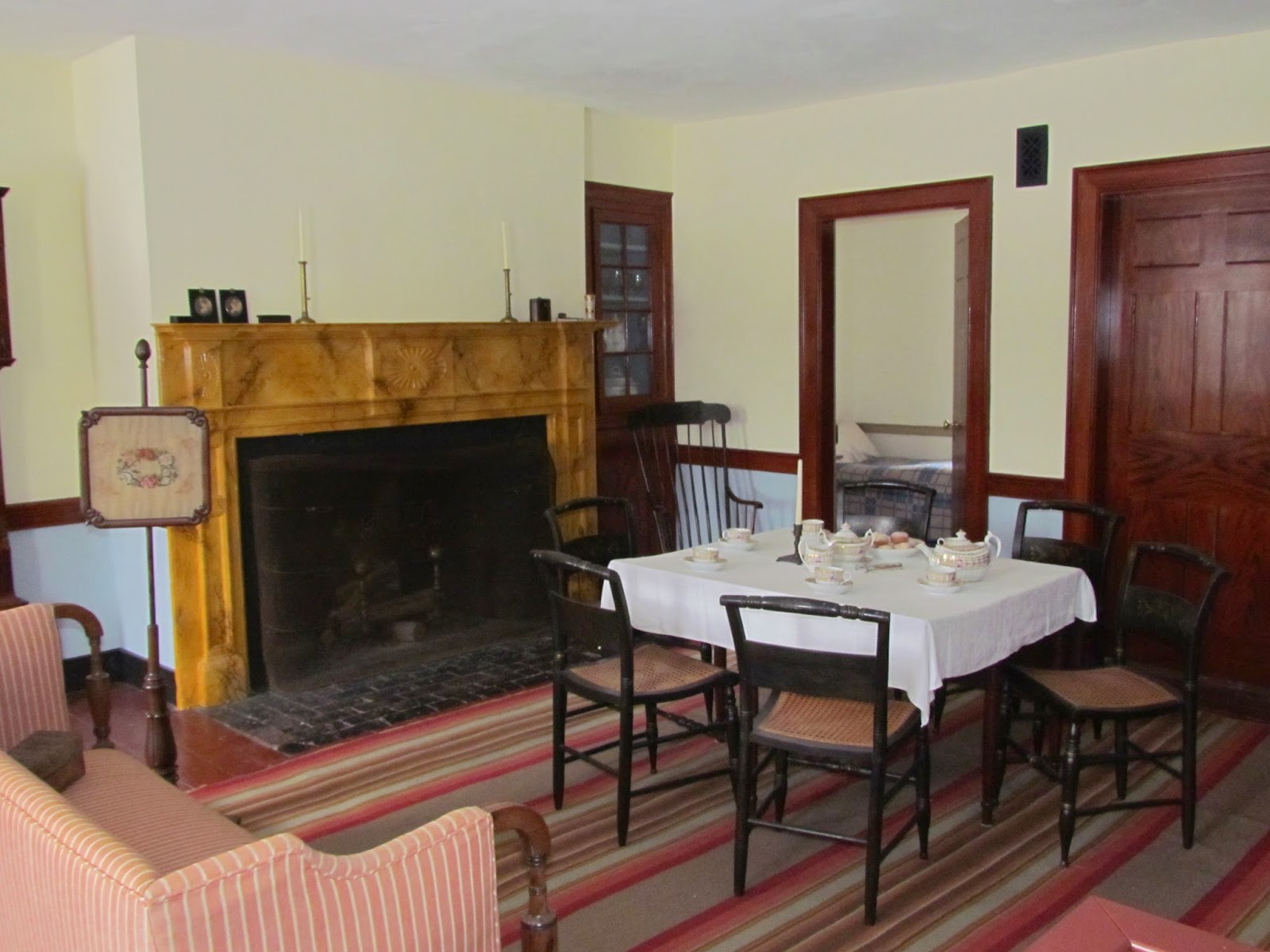 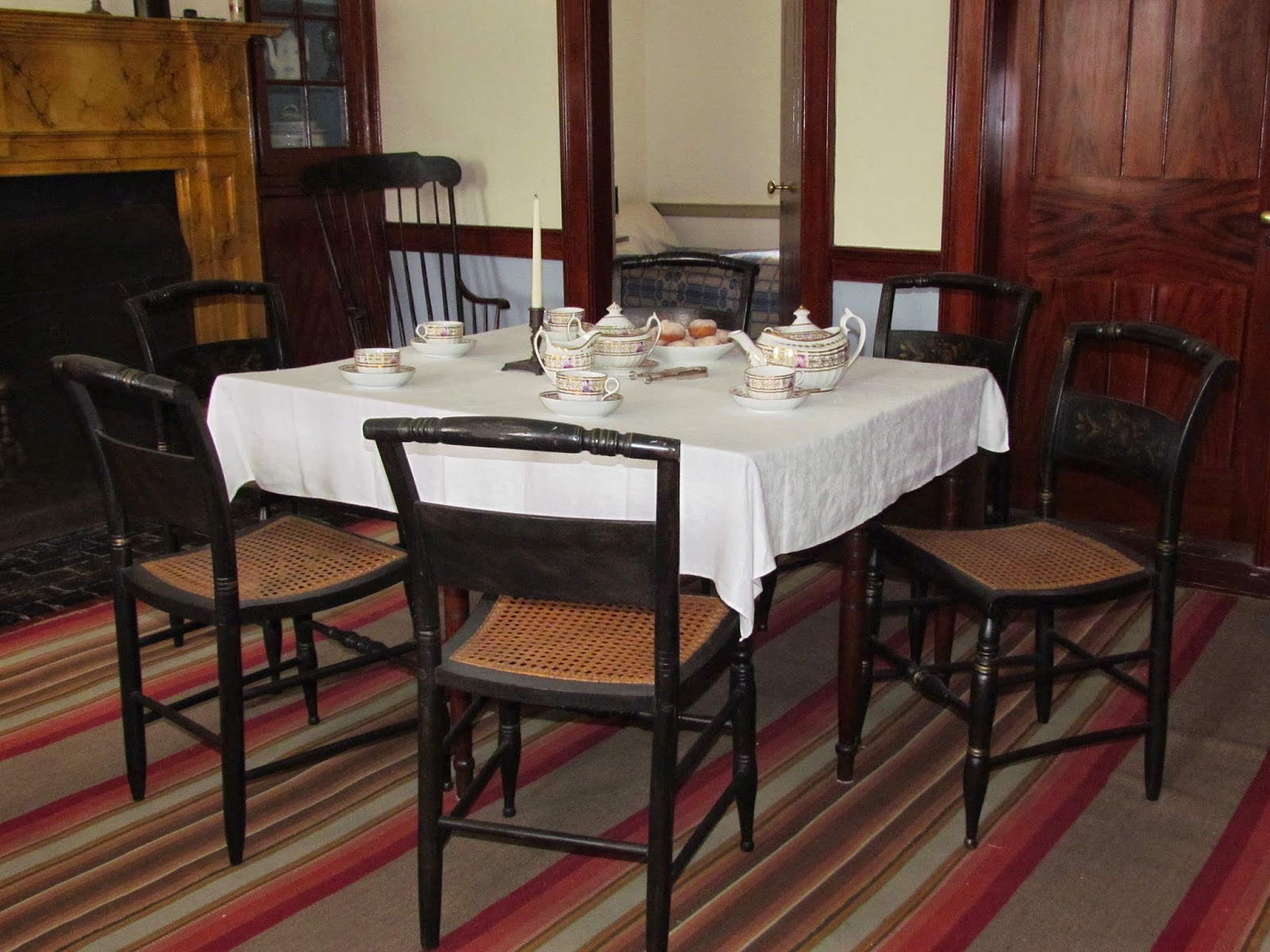 The painted 'fancy chairs' in the parlour are original to the house. I struggled with the faux marble treatment of the neoclassical mantel. The mantels were previously painted (you can see them in the virtual tour) which showed the delicately fashioned mouldings and paterae to advantage, imho. 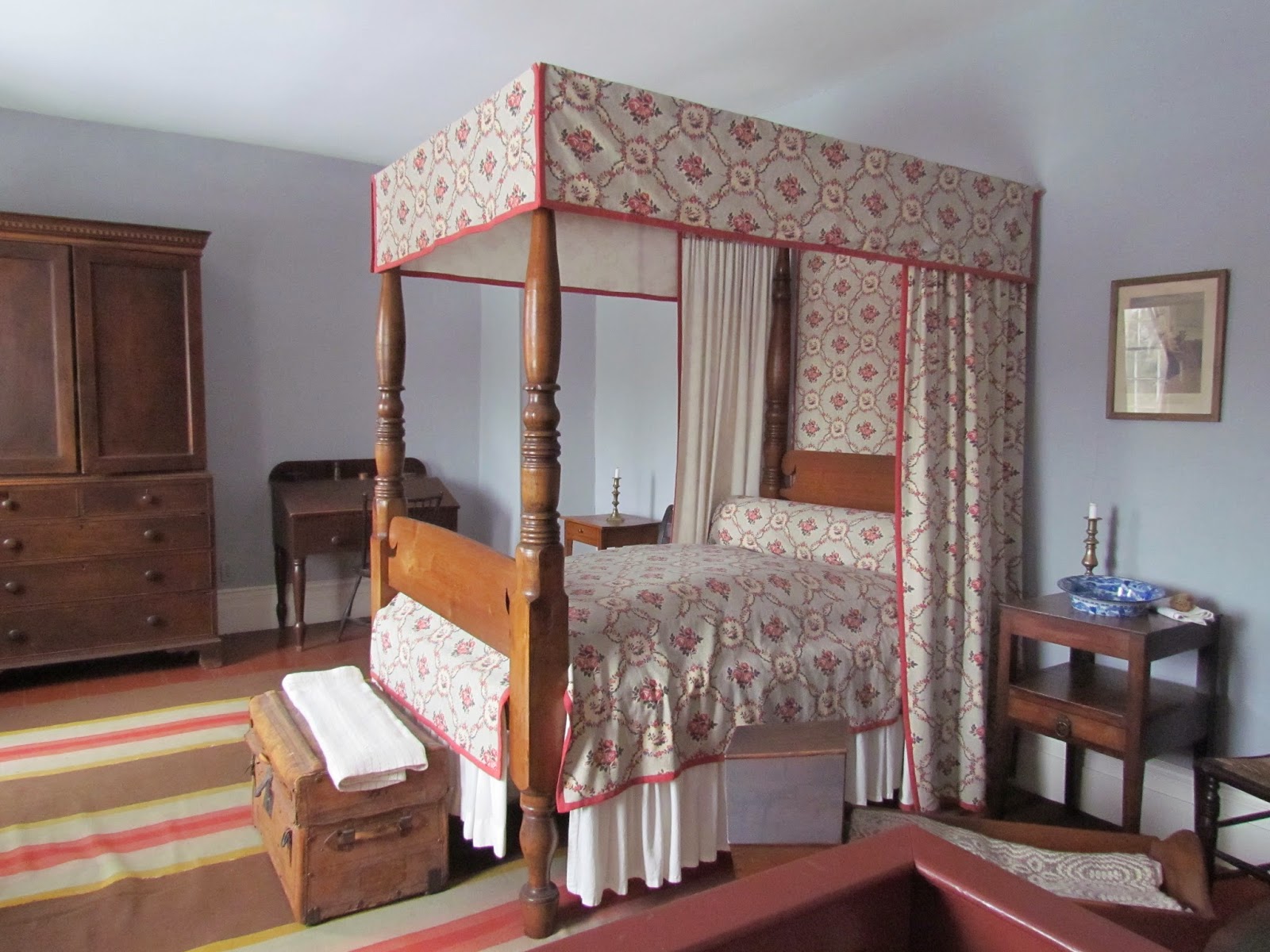 But the rest of the room, from fire-screen to drugget, china to chairs, and the tiny slip rooms beyond (restored in recent years) were exquisite.

These photos help me relive a wonderful day. Should you need a visit - get yourself to Stoney Creek (Battlefield House Museum is open year-round) or take this great virtual tour of the house. 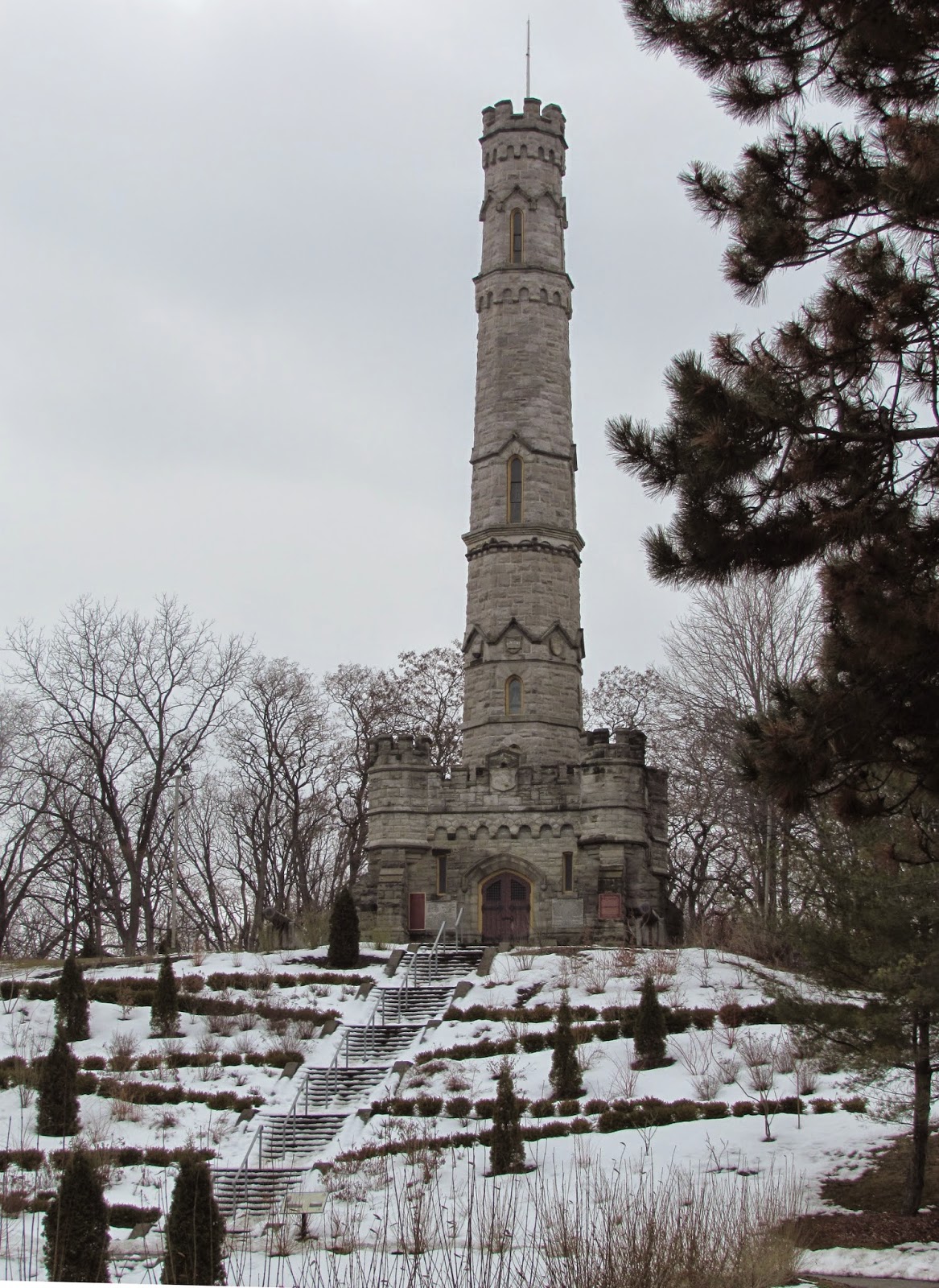 Battlefield House Museum and Park commemorates the battle of Stoney Creek, the Niagara campaign's most important battle of the War of 1812, and possibly of the entire war. Luck, darkness,  first nations support and the usual confusion of warfare of the day resulted in the retreat of a numerically superior American force. This site marks the furthest incursion of Americans into Upper Canada, thwarting a plan that involved moving along Lake Ontario directly to Montreal, and the takeover of the country. How much we forget. Each year a reenactment of the battle helps us remember. 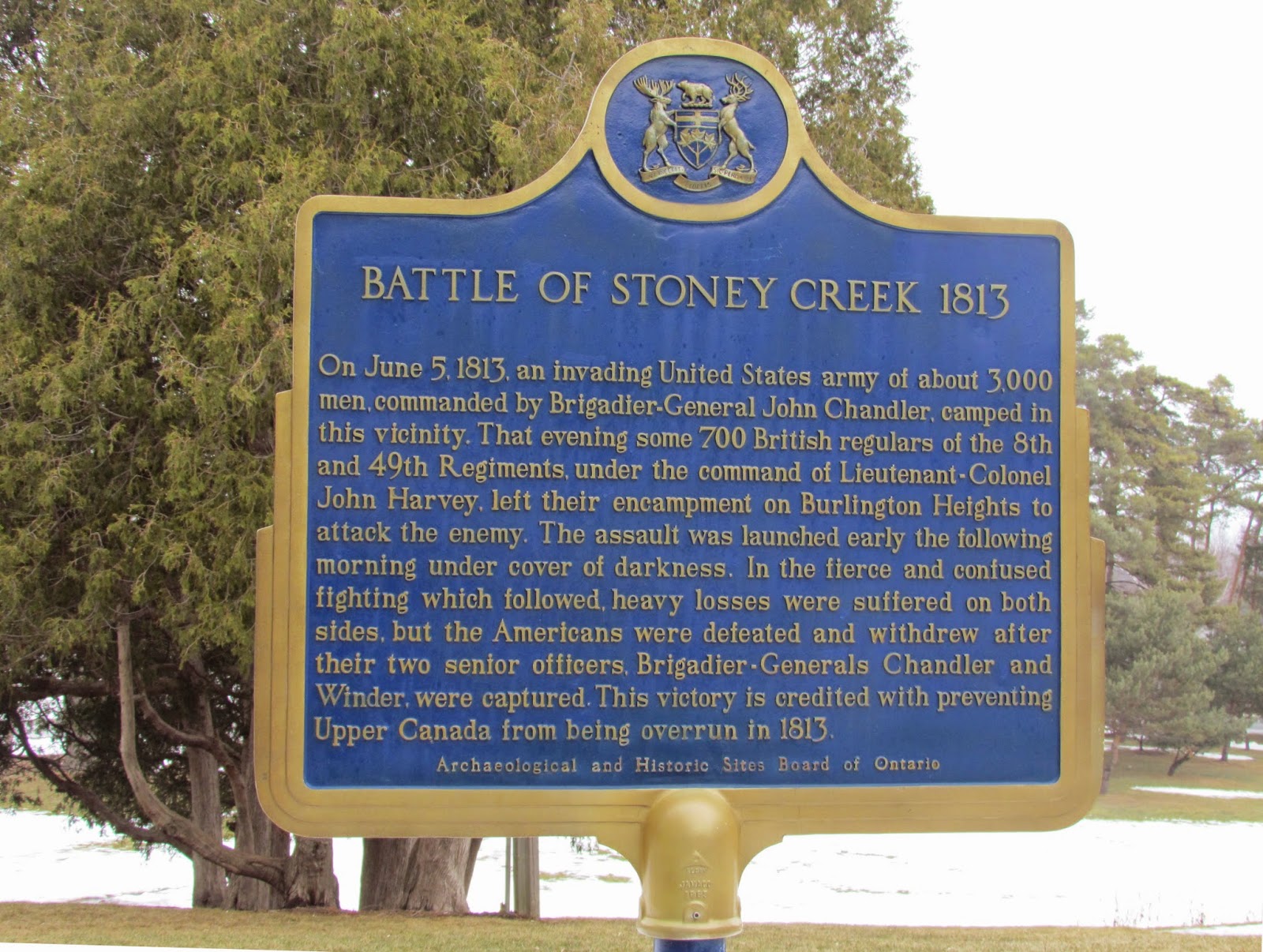 An impressive (if a bit Disney, sorry) monument stands on a landscaped knoll south of Gage house. In 1899 Mary Gage began a subscription to raise funds to build this 100 foot monument (homage to Nelson's monument in Edinburgh - the resemblance is striking) to honour the dead of both sides on the hundredth anniversary of the war. The monument was 'unveiled' by Queen Mary in 1913 - remotely, as one did.

Posted by Ancestral Roofs at 10:53 AM