Upon the occasion of my recent auto accident, one of the daughters of Fogorig (for an explanation of that title check here, page 43) sent me a thoughtful note. This was sweet because of the sentiments, but also because she selected for the message a delightful note card featuring a quaint white-painted frame Ontario farmhouse.
Now, this wouldn't be an unusual choice, given that Florence knows me for an old house nut. Indeed, we have done some bashing along the English Line, up to Menie and Burnbrae looking for the fine stone houses of Scottish masons.

But what is truly fortuitous was that two days later, Denis and I found ourselves in Hamilton, technically Stoney Creek, but with sprawl and all....well, you know. We found ourselves travelling along a two lane country road, Ridge Road, perched at the very edge of the Niagara Escarpment - astonishing terrain!

We found this place, found parking, found lots of opportunity for photos - and even found the house open. And that is very cool because it's a very significant little Carpenter Gothic house. It is a National Historic Site, commemorating the founding by Erland and Janet Lee, of a huge international organization with branches in over 70 countries, with 9 million members,dedicated to the betterment of rural and farm women. The organization is the Women's Institute. And the bright and curious Florence is a lifelong member. The story which started the Women's Institutes is a sad one; a woman named Adelaide Hoodless set out to create something good from the preventable death of her fourth baby, probably from drinking contaminated milk. She started a campaign to raise the level of education for girls and women, especially in the domestic sciences; one of her speaking engagements was at the home of Erland and Janet Lee. Together they created the first rural women's organization, the Women's Institutes, in 1897. Today we would call it networking, education and empowerment.

I had a great time at the house, while husband napped in the car. I took some photos, and visited the inviting and friendly volunteers at the gift shop, who loaded me up with freebies and info about the group, and encouraged me to return to tour the house. Which I will do. For now, the virtual tour will have to suffice. 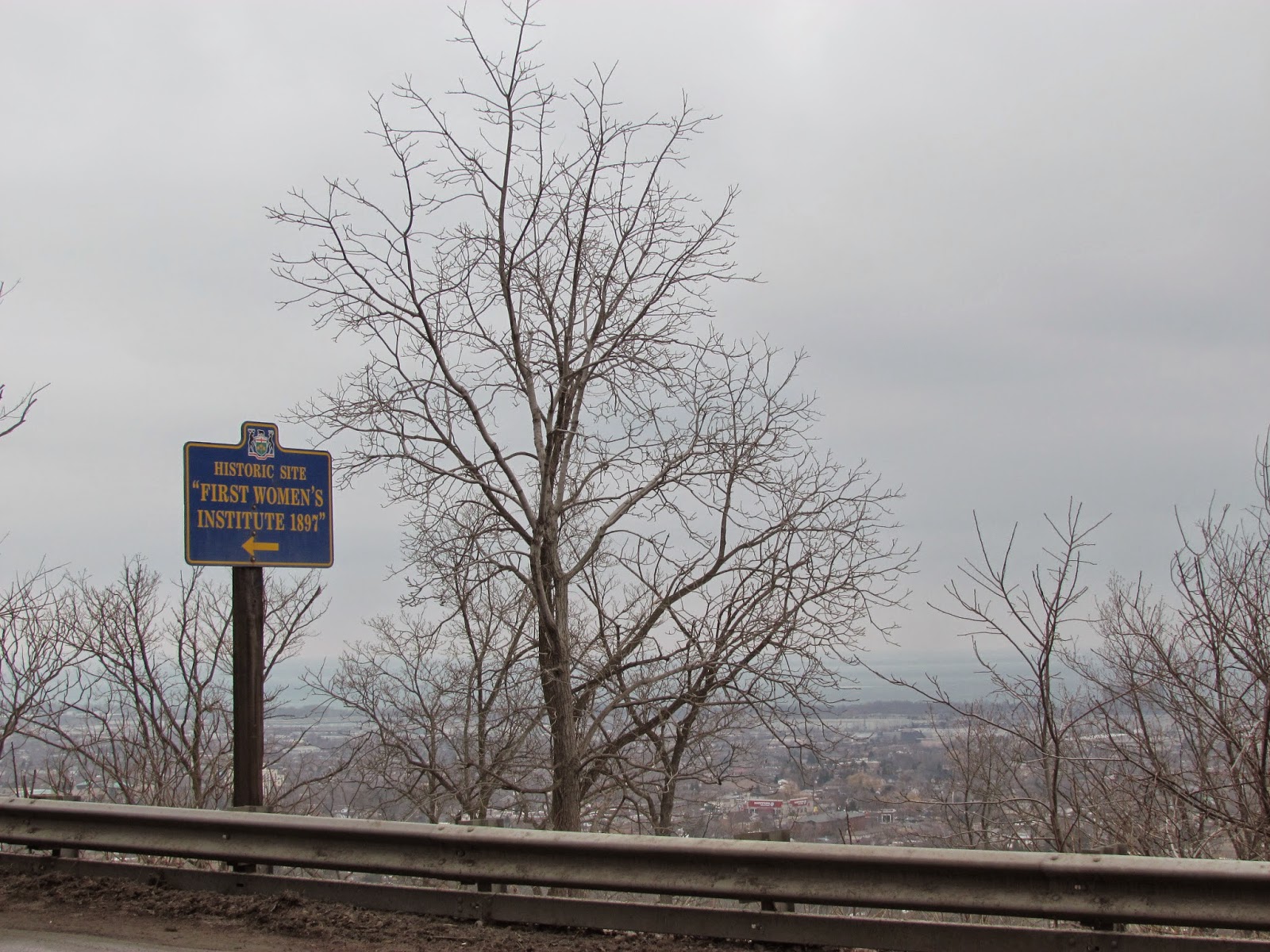 The house was declared a National Historic Site in 2002.

The plaque reads: "This nineteenth century farmhouse is the birthplace of the Women's Institutes(WI), an organization that played a vital role in thousands of small communities. Inspired by domestic science reformer Adelaide Hoodless, and supported by her husband Erland, Janet Lee drafted the constitution of the Stoney Creek Women's Institute here in 1897. From these roots emerged a movement that spread throughout Canada and around the world. In meeting halls across the country, the WI brought women together to learn diverse skills and to promote civic reform, helping them break the grinding isolation of rural life." 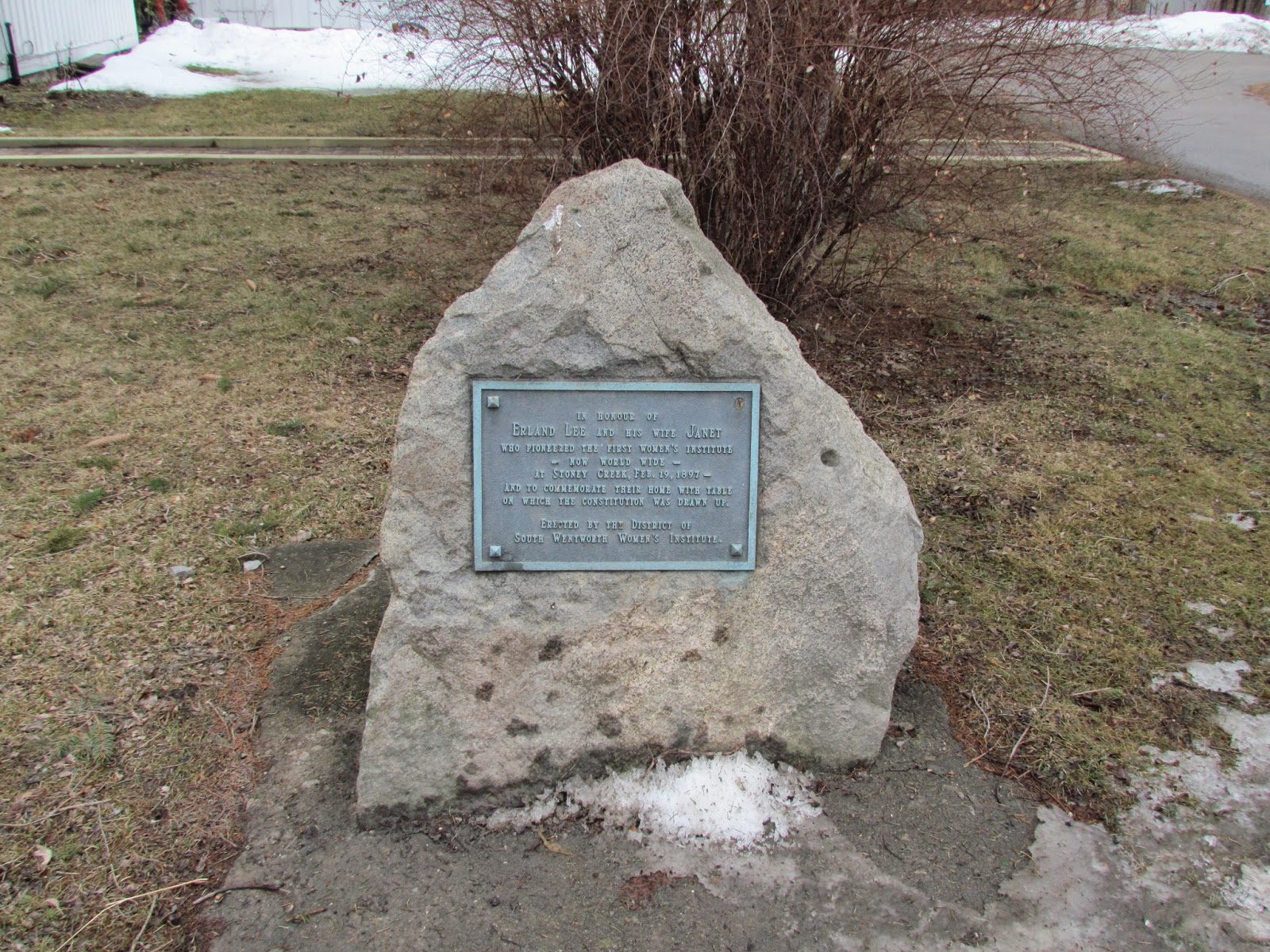 Here's a Google Streetview link  that places you by the OHT plaque directly in front of the Erland and Janet Lee home, at the very brink of the Escarpment. Just to your right, traffic charging up Dewitt Road pops up over the edge onto Ridge Road. Step over the Armco barrier and it's straight down to somebody's suburban back yard along Maple Drive. From there, a direct line NNE gets you down to Burlington Bay.

Paddle to the sea.
Posted by Ancestral Roofs at 4:46 PM