This Used to be my Town too 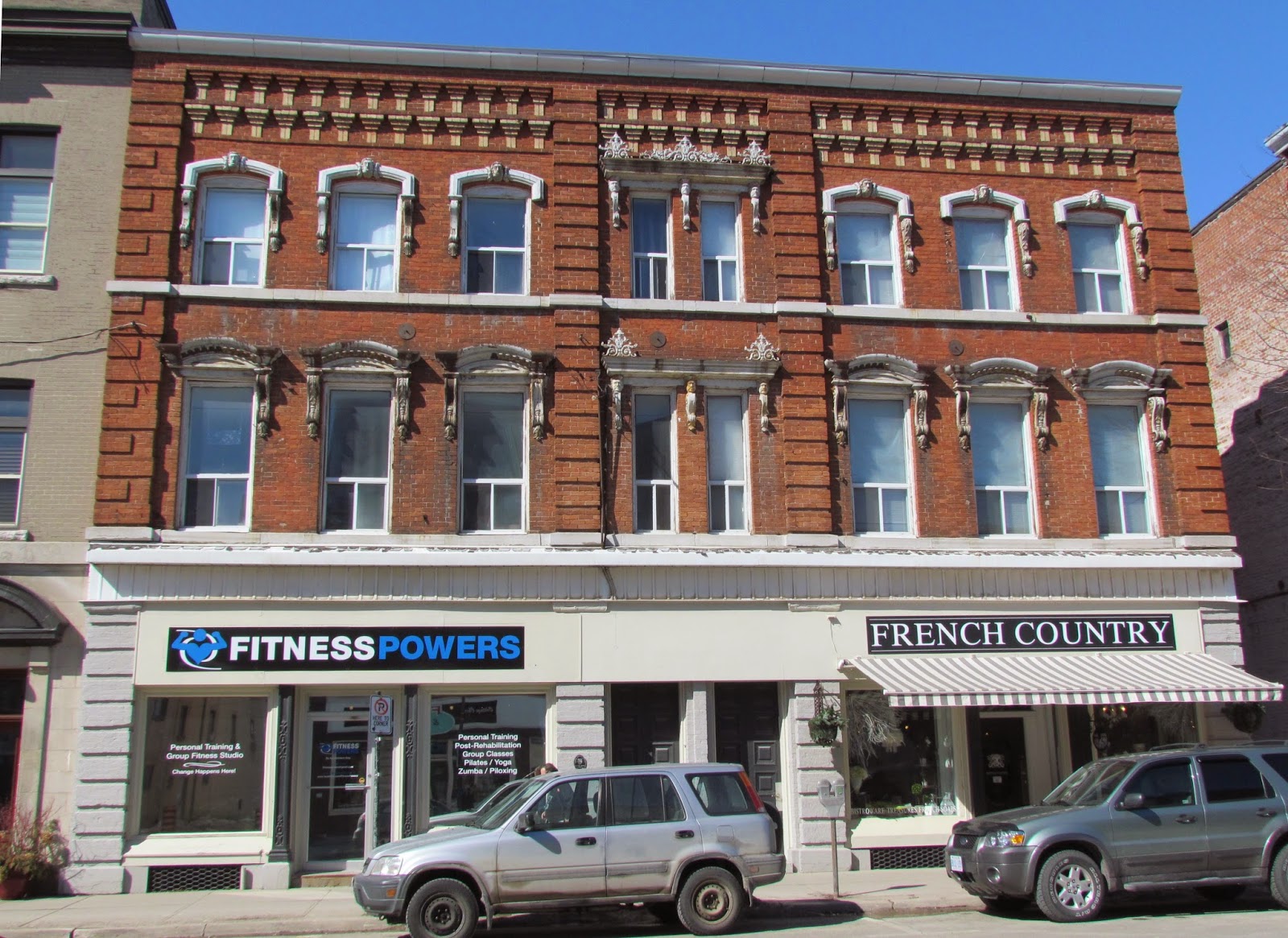 Apologies to James Taylor for this title, and so much else. But the song suits today's feeling of nostalgia. I spent some time in Picton recently, my hometown. In actual fact, I grew up on a farm twelve long (in the day) miles outside of town.

This great divide was difficult to cross during my years at the high school in Picton. Looking back, I doubt I ever made the crossing, so strange does the town seem to me, even now. 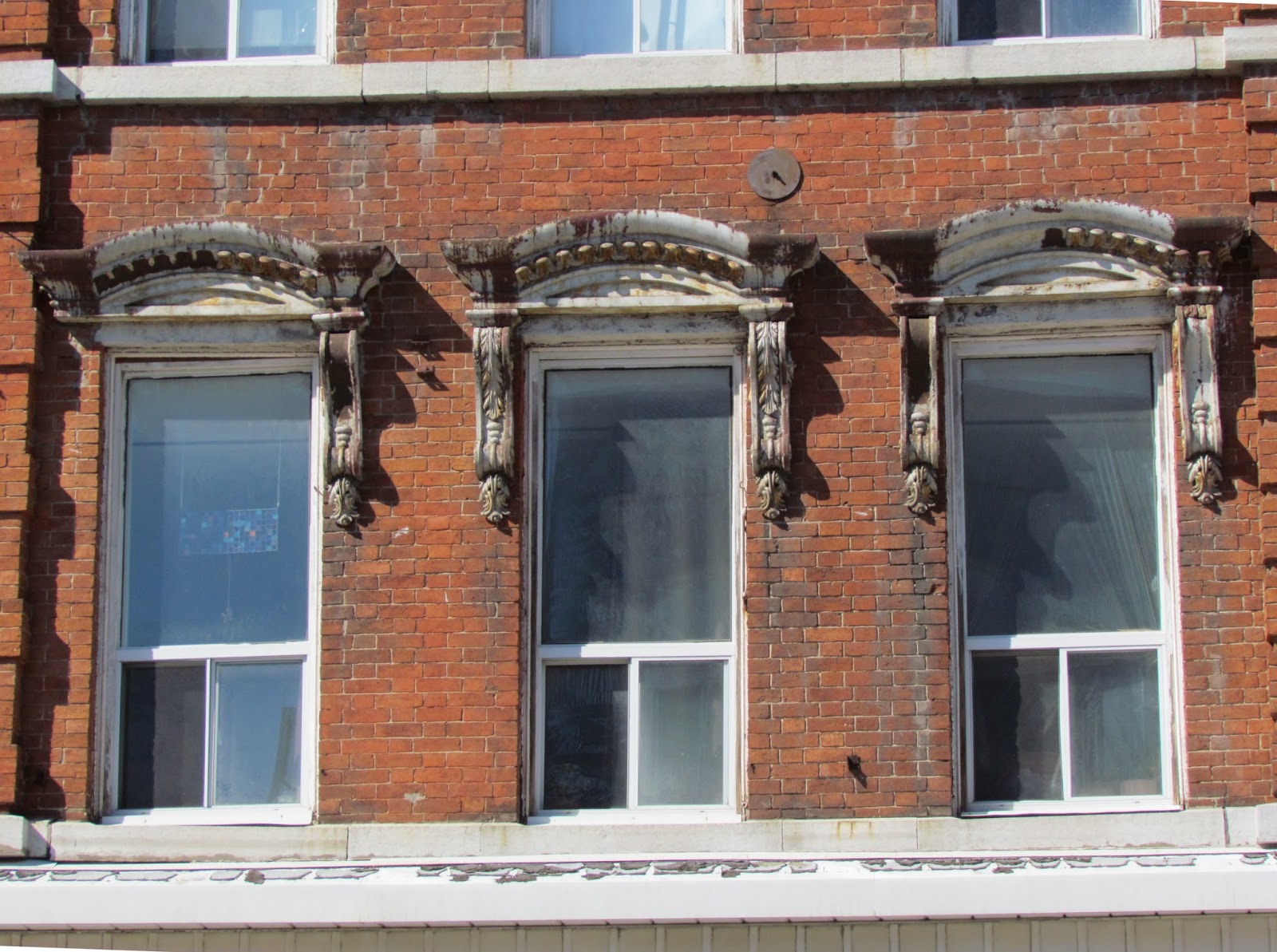 But today, fresh on the heels of the encouraging announcement that Guelph's Petrie Building with its absolutely unique full sheet metal facade (the only one in Canada, it's said) has been granted a stay of execution by Tyrcathlen Industries' purchase , I felt impelled to visit a building in Picton with cast iron architectural detail, which figures in my own history.

The building I visited was the Chapman and Striker Drug Store, built around 1860. You can see it in the post card view above; its the one with two main floor awnings.


The ground level facade has changed, but the chanelled brick bands persist at the corners.

The best features remain - the cast iron hood mouldings over the windows. The detail is amazing once you look closely; the trim is different on the second and third storeys and yet again in the central bay which is set off by channelled brick pilasters. 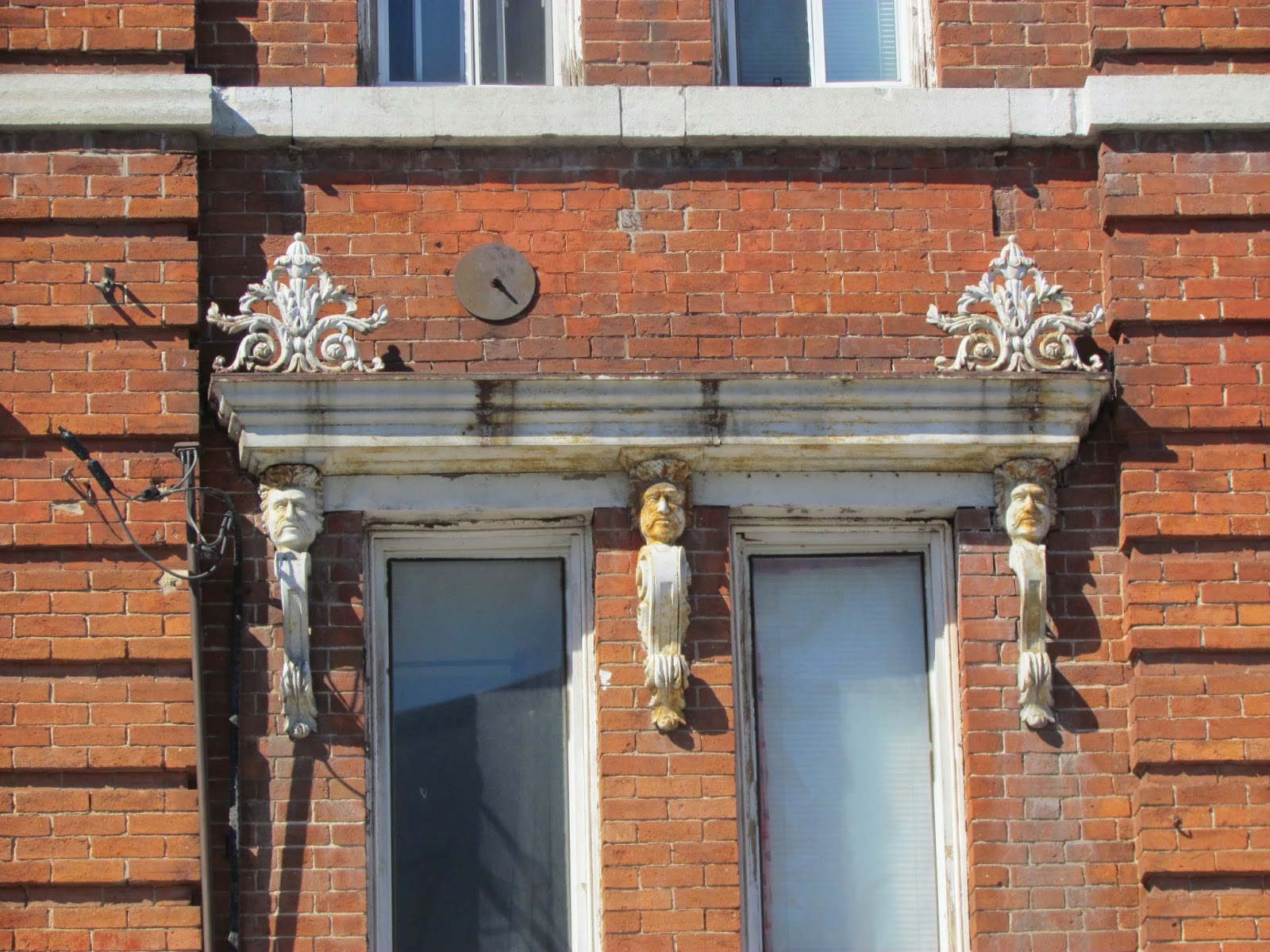 The arched second floor hoods on the right and left sides of the facade are supported by consoles with acanthus leaf design. The straight centre lintel (with much of the iron cresting missing) is supported by consoles topped by a human head! The heads reoccur on the third floor, on a more complete decorative lintel, below some fine polychromatic brickwork smocking.

The scowling head makes me think of the signature 'Medusa heads' of James Bogardus, the American who invented decorative architectural cast iron. One of my next projects is to try to find the source of the cast iron elements on local buildings. I was delighted to see that the folks researching the Petrie Building had identified the source of their cast iron as Bakewell and Mullins of Ohio, who ran a catalogue operation selling cast iron bits. (It's not as crazy as you think - the railways were making everything available in the day.) 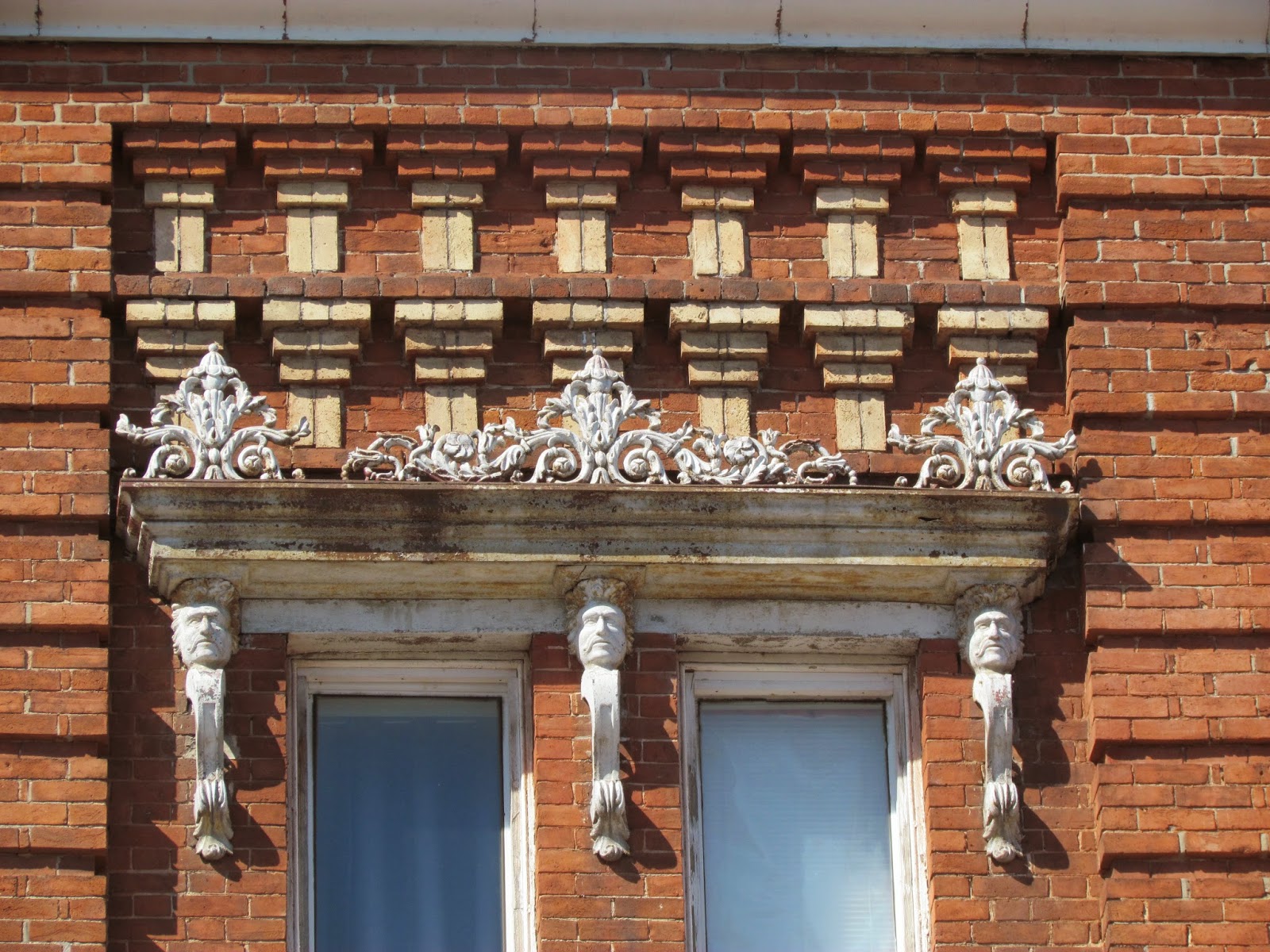 Eric's post card at the top of the post shows a cast iron railing mounted in front of the windows in the centre bay - another mail order item. Dover Press put out a replica of Badger's Illustrated Catalogue of Cast-Iron Architecture, originally published in 1865. The range of architectural cast-iron elements is astonishing. Have it on my booklist.

Stokes and Cruickshank described the building as "perhaps the best preserved commercial block in Picton" (The Settler's Dream 1984.)

As family connections go, I am related to this Italianate commercial building in Picton. I told the story a few years back, so you can follow the link to avoid me repeating myself, or sit through a precis. This building housed a drug store and soda counter  - always smelled of perfume and coffee - intoxicating blend even today. Squeaky oiled wood floor, chrome and formica.


The drug store started around 1860, a partnership between a long-distant maternal ancestor Gideon Striker and his brother in law Reuben Chapman. After their deaths, the building was purchased by Charles Allison (the block is still called the Allison block; until recently high school associate Marilyn Hymus's gift shop Allison's occupied the east side). The drug store I grew up with, Teasel's, took over from Allison after 1927. 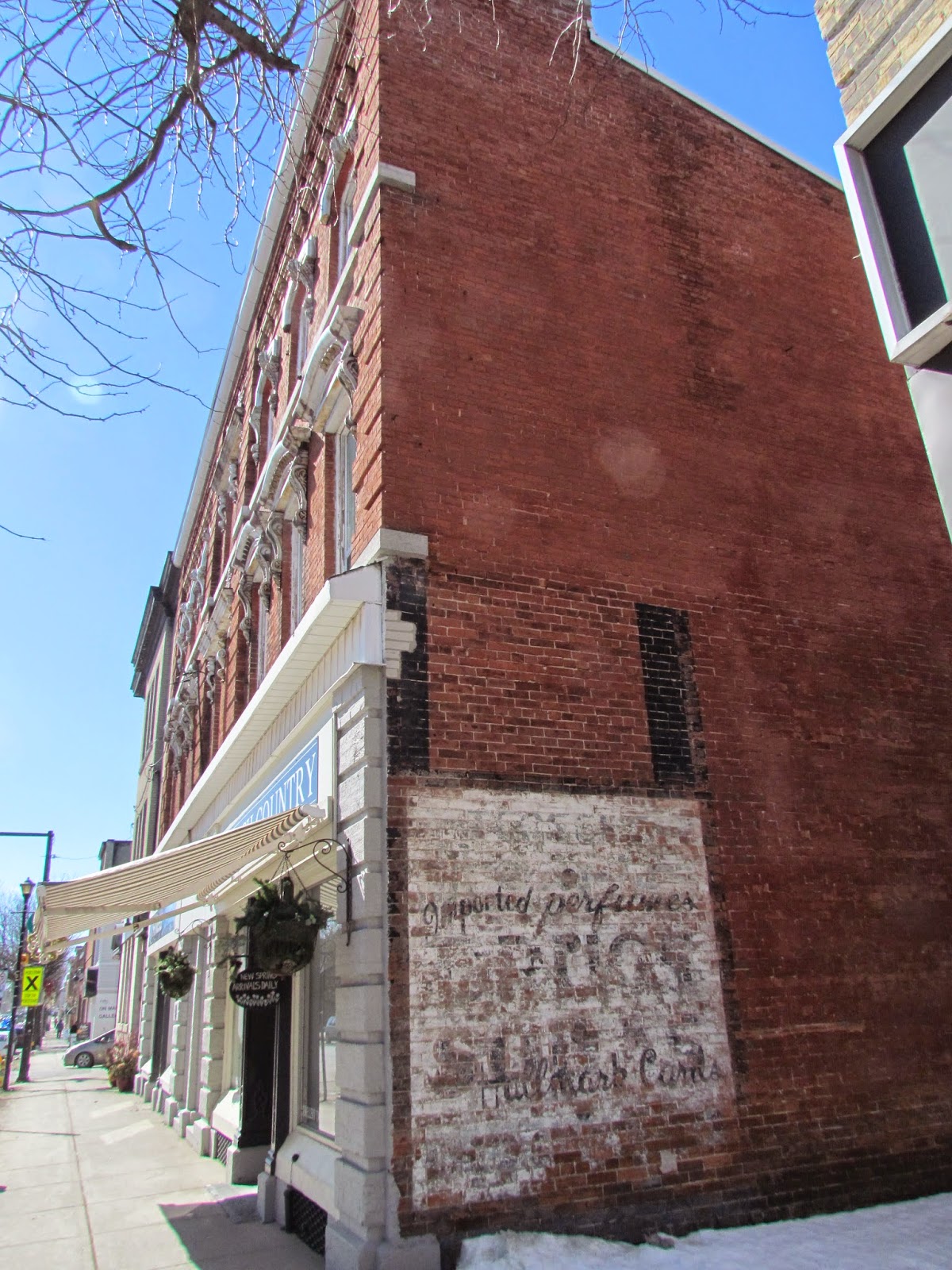 These two houses belonged to the partners in the pharmacy. The house to the left is Gideon Striker's (1868), which shows off its french doors and grand door-case still, along Main Street East. Striker went on to become an M.P.P.

Chapman's house was earlier (1857 or thereabouts); it still has some of the cast iron trim above the windows, and the brick quoins similar to those of the commercial building. The early parapet end building has suffered greatly at the hands of later renovations/additions.


The cast iron architecture story is one I find endlessly fascinating. If you are interested, the books of Margot Gayle are the best resource.


Here's a nice little summary.
Here's another enthusiast's blog with lots of video tours of iron fronts.
And here's something I wrote earlier this year.
Posted by Ancestral Roofs at 4:08 PM