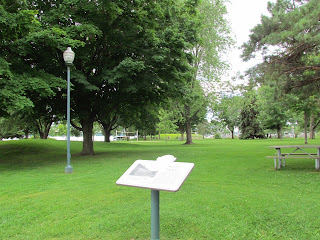 We recently received the mail-out announcing the upcoming ACO Quinte walks, from David Bentley, long-time organizer of these entertaining and informative Sunday afternoon events. On September 20, there will be a driving tour of Belleville's 'brownfields.'

Although I have long been fascinated by former industrial sites (for ecological, historical and yes, aesthetic reasons) I had never heard the term 'brownfields.' Here's the definition, from the ACO pamphlet:

"A brownfield is defined as a former industrial or commerical site where its future use is affected by the presence or the perceived presence of potentially harmful environmental contamination." 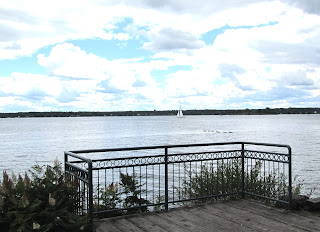 Although massive gas works installations and former spreading factory complexes have long since yielded to fields of grass, the possible cost of remediation often keeps developers circling warily at a distance, and leaves attractive spaces derelict. 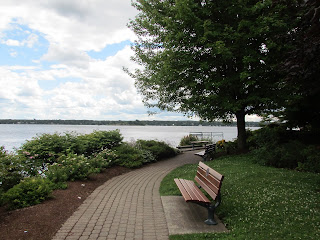 So often they are waterfront properties, as c19 industry adopted the locations, for trans-shipping of course, but for handy disposal of industrial waste, also. Now these lake and river sites are in high demand, but some are still in debate due to their dark past. 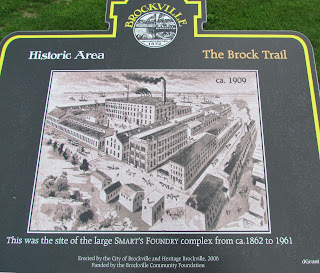 The ACO tour in Belleville will visit a few well-known sites which became pariahs due to their past history; some have been remediated. Belleville's huge Zwick's Park was once a garbage dump (I always felt a resonance from that description of industrial New Jersey in The Great Gatsby, as we drove through the marshy site on a rare trip to Belleville, from PEC.)

But unless you detect the mushroom shaped methane vents, you don't know the park's past, and can't celebrate its recovery.

I really like what Brockville has done to interpret their history for the passerby. When I was in town I spent a wonderful hour in Hardy Park. Two of the city's Historic Area stops interpreted the leafy beautiful St. Lawrence River site with plaques and photos of its former tenant, the sprawling Smart Foundry Complex (1862-1961.)

Brockville historian Doug Grant features some early photos of the industrial waterfront and Smart's Foundry on the site Old Brockville Photographs - click on the second photo to enlarge it, and you'll see a photo of the factory aggrandized in the etching above.

Smart's Foundry was in the news as recently as last year, when the final building of the complex was demolished. Good on you, Brockville, for keeping your history alive. Sometime soon I'll feature a few more of these plaques that I enjoyed on my walking tour of the city.

Posted by Ancestral Roofs at 12:11 PM