Meet you at the General Store

Lots has been written about the general store over the years since it disappeared.

I did a post back in 2012 about a favourite former general store, the Old Hastings Mercantile and Gallery in Ormsby. I met proprietors Lillian and Gary while researching an article for Country Roads Spring 2012 issue.

The magazine's editors Nancy and John Hopkins have a few back issues online, but not this one, alas. 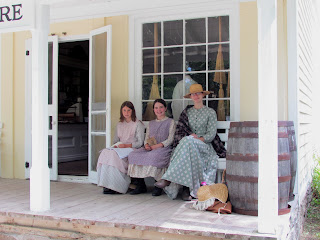 The general store was vital to early communities, providing those precious items which the new homestead could not provide, from salt and tea, or goods not manufactured locally. Luxury items like fine china and factory made goods would have remained out of reach for most settlers. 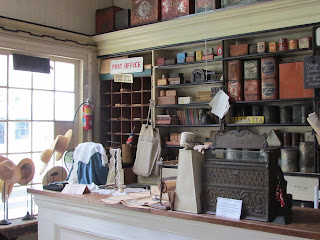 The general store usually housed the post office for those cherished letters from home, provided financial services by way of barter and credit, and offered that most precious of all commodities to those folks living in relative isolation, human contact and news. 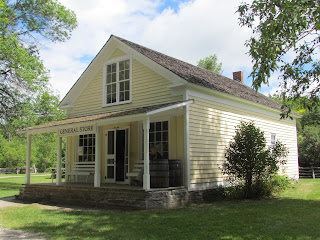 Last week, while camping in the Kawartha Lakes area, I finally had a chance to visit Lang Pioneer Village, and a general store whose story I had long known, and whose acquaintance I had been waiting to make. And, as did visitors to General Stores throughout our history. I got to experience some company and conversation. 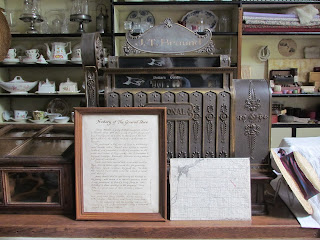 The visit gave me an opportunity to remember my friend Florence and her sister Doris, daughters of Fogorig, a Scottish setttlement near Campbellford, whose story I wrote in County and Quinte Living in the Winter 2013 issue.

Doris and her husband Frank Potts donated the store, which Frank had operated for years in the tiny crossroads hamlet of Menie, to Lang Pioneer Village. The Potts were very active in local historical associations; it must have been a joy for them to see it restored in such fine fashion.


'Storekeeper' volunteer Andrew was a delightful host. He recalled Doris and Frank Potts, and their donation of the store, its counters and cases, cash registers and customer account ledgers. The story of the original storekeeper, James Mather of Scotland, was recounted beside an excerpt from a map in Belden's 1887 atlas showing Menie. 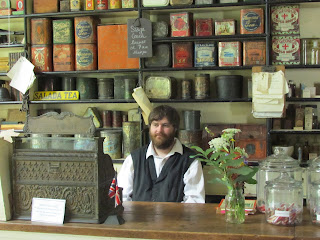 We had a lively discussion about the 1899 recreation of the store and its contents, an outstanding collection of artifacts, merchandise which would have been available (while supplies lasted) at the general stores of the day.

Andrew shared an insight into tensions which were beginning in the communities by 1910 or so, when villagers could order merchandise from the new Eaton's mail order catalogue. Mind you, they would have to pick up their merchandise at the general store post office, which might have proved awkward (and the store owner might not be quite to quick to grant credit or do favours in future...) 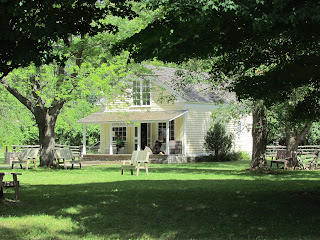 I had one of those pleasant  general store moments at Menie store. I was readying to take a photo, when a couple halted, to avoid entering my field of vision. We exchanged pleasantries, I bade them continue, and explained I knew the lady who had donated the building to the pioneer village. Turns out the couple did also! In fact, they live in a stone house in the store's former neighbourhood, a few properties away. Imagine. And we have been in touch.

Nice sociable things really do happen at the general store.


Posted by Ancestral Roofs at 7:08 PM