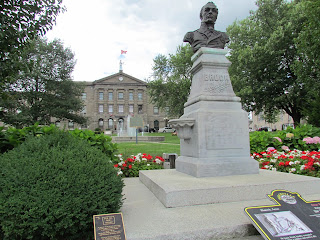 One often hears the name Billa Flint in Belleville/Hastings County, associated with some philanthropy or business venture, but the book enabled me to finally connect all the industrious dots in this nation-builder's story. I'm hoping to do a post soon with local links.

But there is an intriguing connection with Billa Flint in Brockville, and a walkabout in the oldest section of the city gave me an opportunity to explore his origins. Before he tired of his father's irascible drunken ways, and set out to seek his fortune in Belleville. Which he did.

But back to Billa Flint Sr. In 2014  I met Curt Wheeler, when we both joined up with Tom Cruickshank's tour group visiting the restored homes (and church) of John and Diane Brisley in Prince Edward County.

(I've blogged about this dedicated couple on occasion, and shared their story in the spring 2014 issue of County and Quinte Living.)

Curt added to the little bit I knew of Billa Flint's history. He reminded me that Billa Flint of Belleville (Actinolite, Flinton) was actually Billa Flint Junior. Curt lives in, and is restoring, the stone homestead of Billa Flint Sr. just north of Brockville. A huge and most worthy enterprise. Shortly after 1800 Flint Sr. established a store there, along the main road from Prescott to Kingston, eleven kilometers north of the river, in what likely felt like complete and utter wilderness. 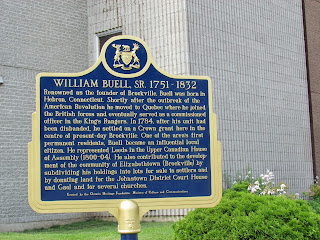 I was intrigued to read  La Barge's account of the Junior Flint's early life in Brockville, where his obstreperous father had moved the family and the family business after the end of the War of 1812.


Brockville on the St. Lawrence was a booming town, although fractious. Sounds like the elder Flint's contemporaries might have been as contrary as he was. One of the biggest controversies in which town-folk were engaged was choosing a name for the place! Took them twenty years!

Names that were floated were Buell's Bay, or Williamstown (one of the early movers was Willliam Buell, who still boasts a street named in his honour.)


Charles Jones offered Charlestown. So much bickering took place that some wag coined the name 'Snarlington.' Fortunately, from the ashes of the war a hero emerged, and it was easy for all to adopt the name Brockville.
I had a wander around the old downtown section of Brockville along Water, Apple, and Broad Street, an old area hugging the river, where some early buildings still stand to tell the town's story. I followed a very early map indeed.

A link to it can be found at blogger Doug Grant's  'Brockville History Album', a great site. It's William Buell's 1816 map of the city. On it, you can see the properties accumulated by Billa Flint Sr. And William Buell. And many of the old names still associated with places I visited, heritage walking tour guide in hand. (Around the Town, published by the Brockville Museum.)


The map shows a small piece of property under the name of Billa Flint. Today Flint Street runs beside it still, with a great hulking high-rise above it. He was an ambitious man; he'd likely be pleased. 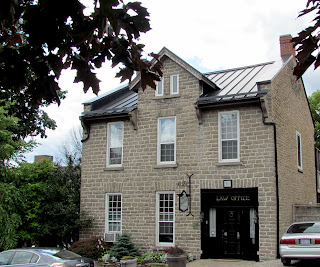 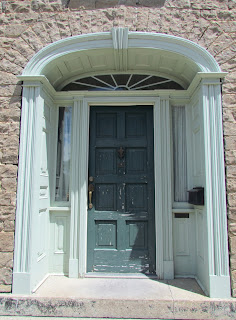 This former commercial/industrial/residential area (no zoning obsessiveness in those get-ahead days) is calling me back already. There are still some old  doors inviting me inside, a few stops further along the walking tour of Brockville on the St. Lawrence.