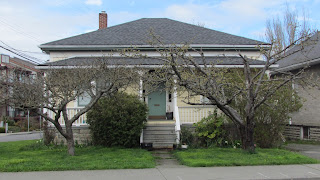 On our April trip to Victoria, temporary residents of the lovely old James Bay area, we took full advantage of walking tour guides produced by the Victoria Heritage Foundation. Armed with umbrellas against the occasional drizzle, Heritage Walking Tour #1 clutched in damp hands, we headed out to find Emily Carr associations. Not difficult. Our street was once called Carr Street, and the yellow Italianate family home was a few doors away. Not much further to The House of All Sorts. 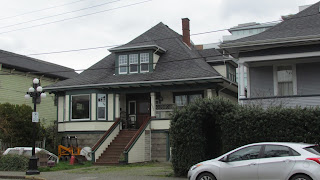 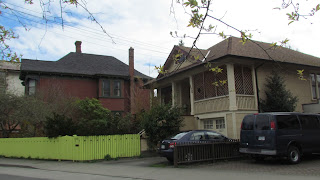 As we tried to put our finger on that 'je ne sais quoi' which provides West Coast character, we began to read the fine print in the guide. Now I won't be disingenuous and pretend we were fooled into thinking that Colonel Bung had some sort of connection with the early fort and things military. But it was fun to be a bit mystified as we tracked down examples of familiar and unusual monikers in the fog, like QA cottages, Edw Classical Revival, Edw 4Sq, A&C cottages, Br A&C, EV A&C and English Revival Cottage.

And our favourite, Col Bung. Colonial Bungalow, to those not yet properly introduced. To get you acquainted, here's Victoria's old house guide. (I suppose to Ontarians, our Colonial Bung would have been the UEL's first log house?)

The Colonial Bungalow (1905 - 1925) is an economical, vernacular, single-storey, hipped roof cottage. The Victoria folk suggest its ancestors are the buildings of the British colonial administrators in India, the name bungalow being adopted from the low verandahed 'bangala' of the Bengal region. Our Ontario Regency cottage tradition (1820-1860) claims the same origins. A glance at the dates when this colonial inspiration bore fruit 'out west' highlights how very new Canada's western cities are. 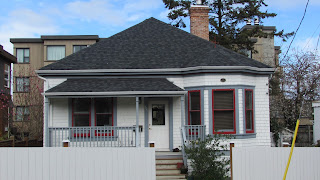 Another tour brochure for nearby Fairfield provides loads of info in an appropriately compact space. Colonial Bungalow: typically one and a half storey, bellcast hip roof , at least one dormer (for light and air in the snug confines of that upper half storey,) wide projecting eaves with flat brackets (modillions if you wish), full-width inset verandah, Classical columns or posts with simplified capitals. Some examples have real second storey living space, with dormer to light it, and perhaps a sleeping porch to escape to. Col Bung. Attenshun! But don't stand up too quickly.

Posted by Ancestral Roofs at 8:42 PM