I fell under the spell of the Old Hastings Road last fall. It's a place humming with old voices, ambitions, tragedy. I wrote about the road here and on my return the following week, last fall.

I posted  about a sister scheme, the Frontenac Road in a post some time ago. 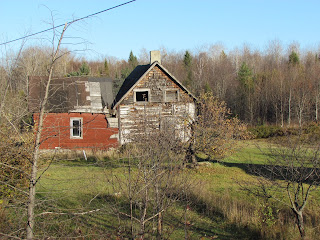 The Colonization road scheme always infuriates me. Can't know, wasn't there, but I suspect it wasn't unbridled optimism in the potential of the north and a fervent desire to see the little guy get ahead, as much as cynical manipulation by  land agents in the 1850s, that led to the surveying and granting of marginal swamp and rock to desperate settlers hoping to make a future. It served some other purpose than altruism. Nation-building by distributing population northward? Stepping stones for the lumbering industry's march northward, little farms available to provide food and labour to the massive logging operations harvesting the thin soil's only crop? 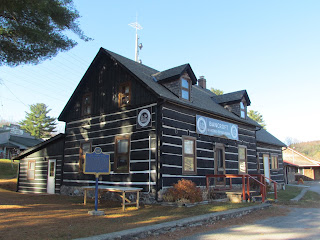 Many have quoted C.F. Aylsworth , Ontario Land Surveyor, who described the Hastings Road in 1925 as "one long, long trail of abandoned farms, adversity, blasted hopes, broken hearts and exhausted ambition." 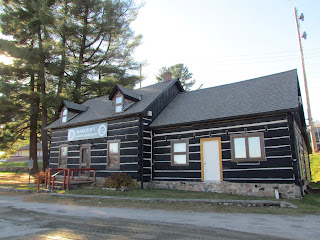 I spent a while in Bancroft and Maynooth last year, learning more about two more colonization roads, the Monck Road and the Peterson Road. (Gerry Boyce in Historic Hastings relates stories of  the Ottawa, Opeongo, Addington and Mississippi Roads as well.)

This squared timber building once sat eight miles east of town, HQ for the Bronson&Weston lumber company. Now it serves as Bancroft's museum and visitor centre.

Outside is an OHT plaque telling the Monck Road story:
"This road was constructed for the dual purpose of opening up a wilderness area to settlement and providing an alternative, less vulnerable military route between the upper Great Lakes and the Ottawa valley. Its line from the vicinity of Lake Couchiching to the junction of the Hastings and Mississippi Colonization Roads at the hamlet of York River (now Bancroft) was surveyed in 1864-5 at the time of the American Civil War. Named in honour of the Governor General (1861-1868) Lord Monck, construction was begun in 1866 and completed in 1873, Free grants of land along its route were made to persons fulfilling the required settlement duties." 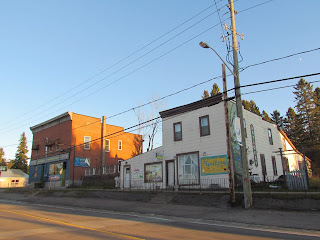 Indulge me in a bit of petulance about how decisions about the development of this country, the use of its resources and the fate of its people, were in the hands of an absentee landlord of sorts, a  British lord, top of the pecking order of privileged oligarchs who intended to recreate the English system of class and privilege in the colonies . How much did he know or care about the fate of the folks to whom he granted 'free' land?

No wonder Upper and Lower Canada's stories are filled with rebellions for democratic reform. I would have been hung. 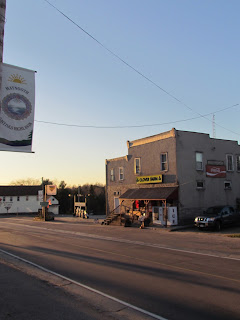 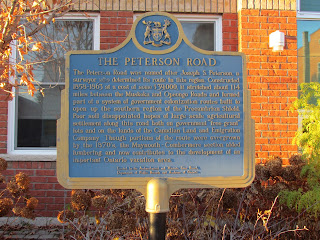 Later on and further north, at Maynooth (formerly Doyle's Corners) I read another plaque, this time,  about the Peterson Road:
"The Peterson Road was named after surveyor Joseph S. Peterson who determined its route in this region. Constructed 1858-1863 at a cost of some $39,000 it stretched  about 114 miles between the Muskoka and Opeongo Roads and formed part of a system of government colonization routes built to open up the southern region of the Precambrian Shield. Poor soil disappointed hopes of large-scale agricultural settlement along this road both on government "free grant" lots and on the land of the Canadian Land and Emigration Company. Though portions of the route were overgrown by the 1870s, the Maynooth-Combermere section aided lumbering and now contributes to the development of an important Ontario vacation area." 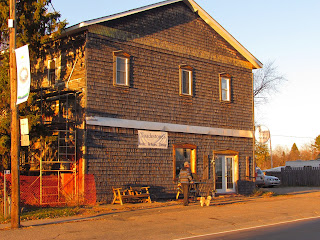 Jane Urquhart's Away is a stunning novel which captures the colonization road settler's experience - the desperate hope, spirit-crushing privation, soul-destroying labour, and the madness born of isolation. It's a favourite I return to time and time again. There's a heart-breaking scene when the son of an Irish famine migrant free grant-holder realizes that the small holding and the future he hoped for it, is built on solid rock.


Liam seeks out the failed bush school of his dead father, to find a rotting copy of the Canadian Geological Survey. He locates his farm north of Moira Lake on the map, "noting that the shading of the map had changed from a dot to a slanted line pattern...According to the words at the bottom of the page, this vast territory was called the Canadian Shield. It covered hundreds of thousands of square miles. There were no pauses in its pervasiveness, no exceptions to its continuity. It had been put there by an ice age that would never happen again, it would be there for all time, and it was made of solid rock."

Posted by Ancestral Roofs at 2:45 PM