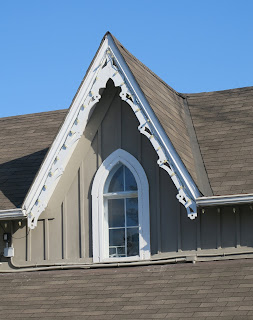 Blame it on the automobile. I do not like recording lovely old houses, and trying to capture all they mean to me, while someone's Beemer or rattle-trap pickup emanates its own energy directly out front. So last week's sunny day visit to Unionville for lunch and walkabout was proving a challenge. That tiny historic town turned shopping destination is not the sort of place in which one risks standing in the centre of Main Street, for that best angle. Nope.

So I started looking up, above the stacked metal, and was reminded of the gaiety of gables. There is a book (to which I long ago succumbed) with that title. The Gaiety of Gables, by Anthony Adamson, with b&w photos by John Willard. I did a pretty good job of introducing the book and its thesis back in 2011, so I won't go on about it here. I'll just pop up a few images of the delightful gables of Unionville. 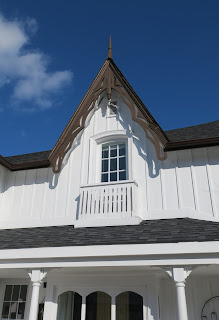 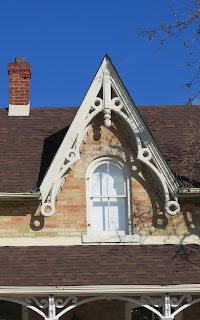 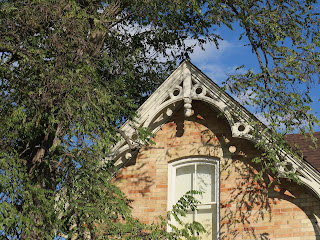 A thought or two about the place. Unionville was settled in 1794 by a weary group of German settlers who had really been kicked around a bit. Rural Roots, written by Mary Byers, Jan Kennedy, Margaret McBurney and the Junior League of Toronto (what an extraordinary name!) and published by UofT Press in 1976 (!) relates the story. I'll show some of these first homes in another post. But first a rant, of sorts. A whine. One of the things that makes the photos in Gaiety of Gables so poignant is their state of decay - paint eroded, bits missing, empty windows. And those images were recorded over 40 years ago. Imagine. 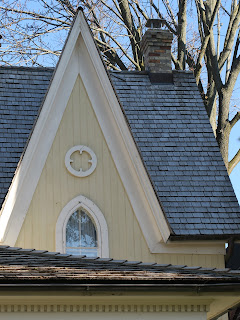 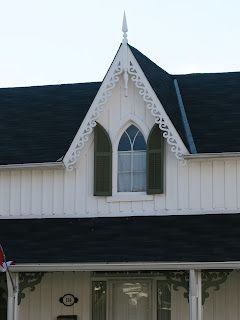 But Unionville's bargeboard and finials and drops are shiny and crisp and lovely. There is a lot of town pride, and an active Business Improvement Area association. Online I find various enthusiasms: "like stepping back in time and walking onto a movie set," "the ultimate in picturesque charm." Another site lists ice-cream, patios and restos, fishing, juicing, and dressing for success  among its top ten things. Not to forget Glama Girl Tween Spa. Nothing about resonance, then? No history trails to follow? No listening to those stories the old houses are telling us? 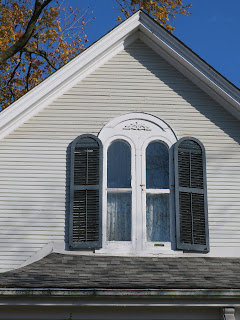 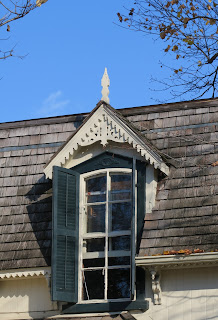 The other Unionville buzz  is planning for large-scale (admittedly, well thought out) retail and residential development in eight areas to the south and west of the historic Main Street. Lots of change afoot. Admittedly, Main Street's existence has been fluid through its history. In the 1840s, a resident donated land to move Main Street one block west from its original path along the river, to avoid the annual flooding. The BIA folk would right that in a moment, were it not already taken care of.

All a bit Kleinburgian. The evolution of charming, and a bit down at the heels, rural villages into shopping and entertainment destinations for the burgeoning GTA. Then the decision to move there, because of the charm. And the charm swallowed up by fake heritage developments. Is it just me?
Posted by Ancestral Roofs at 12:07 PM