Kick and Push and other conversations - Yarker 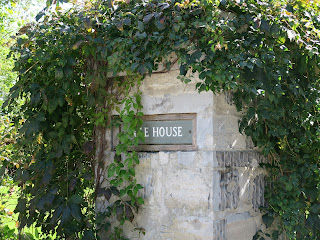 Road trip season is winding down. Sigh. Although I have taken photos in wet November wind and significantly minus January temperatures (aided and abetted by my darling who kept the get-away car warm) I prefer those skin-temperature days of spring, summer and fall. So it's with considerable joy that I look forward to another season with my Lennox and Addington history friend. 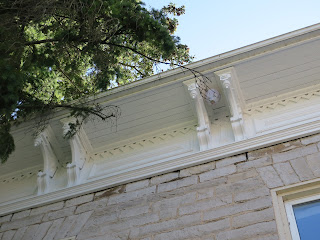 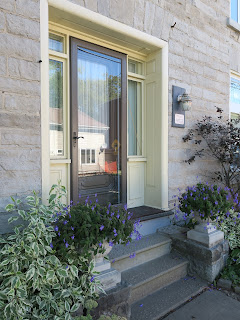 For the next while, looks backward must needs suffice. Like this one, a day in the recent past, when we explored a few limestone towns north of Napanee.

Another of those history portal towns is Yarker on the Napanee River between Colebrook and Wilton. Now, today we wouldn't stand for it (?) but in 1796  when the world was new, a thousand acres of crown land in the first concession of Camden came into the hands of York-based Governor Simcoe, and was dubbed 'the Simcoe Tract.'

A stone Italianate with deep eaves and decorative moulded cornice and outstanding paired brackets, caught our eye first. I didn't capture the facade, with its soulless modern replacement windows, nor can I recall the name on the dignified gatepost.


A delightful local history compiled for the Historical Society in 1909 by E.R.  Checkley describes the Yarker area as "well wooded and well watered." For all that was necessary in the day was a watercourse falling down a height of land (26 feet at the time) and water powered industry popped up. Got me thinking back to my rambles around Newburgh along the same river.


The standard hard-won accomplishments followed: mills, post office, general stores, hotel, foundry and manufactories, electric light plant in the late 1890s. Another local historian, Fred Bell (in the same compilation) recounts that Yarker was at its peak from 1896-1912.

I note that Peter VanLuven, whose name we encountered in Battersea early this year was  a mill owner in Yarker around the turn of the (last) century. 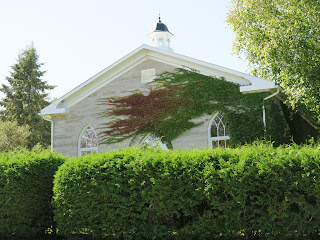 Yarker - well not at first. The village was first called Simcoe Falls and only later named for George Yarker, mill owner at Sydenham. Mr. Checkley recounts this scion of an old Yorkshire family, leader in Kingston society. won out over Pekin, Rockburg and several other obvious and not so obvious suggestions.

As we toiled uphill from the river, Jane recalled an impulse-buy from her university days, which fell through (likely a good thing.) The time was not right. The 1869 stone Methodist church is now a beautifully restored ivy-bedizened home encircled by fiercely protective hedges.  A fascinating thing about the church, is that the railway ran right along the front of the churchyard. Now the right of way forms part of the inviting Cataraqui Trail System.  Let Streetview get you oriented. 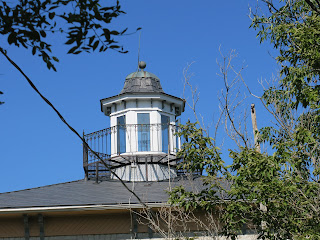 Another eye-catcher is the two-storey stone schoolhouse. Mr. Checkley recounts a one-storey stone school built in 1872, replacing an 1840s frame or log version. A second storey was added in 1896, and mirabile dictu, the derelict and boarded up school was purchased and restored as a home in the mid 1980s. Love these people.

Jane got to meet them on a local house tour. Her photo of the Victorian-flashy porch proves she got closer to this beauty than we did on our walk together.


From the school/church intersection, we wandered along the trail, tempted onward by beckoning shade and the promise of a view of the river from the bridge. I want to return to walk more of the 100 km. system. You too? Here's a map to help you with your plans. The Cataraqui Trail runs along a former CN line from Smiths Falls to  Strathcona (a paper mill near Newburgh.)


Railway history baffles me. In the early days, enterprising nation-builders in communities large and small financed all kinds of local rail  lines, connecting their towns to major rail transportation routes, and the hope of prosperity. Gradually the dreams died. Yarker was quite the railroad town.

In 1884, the Napanee, Tamworth and Quebec Railway, engine of progress, was inaugurated. Sold, renamed Napanee and Western, then Bay of Quinte Railway, and extended by lumber baron Edward Rathbun, it operated along the Kingston and Pembroke Railway track (E.R.Checkley)

Lots of great books have been written about those heady days. Just when we had given up trying to put the story together, we came upon a fellow holding forth on the topic to a group, so we listened in.


And made the acquaintance of Steven Manders, railway buff, whose book First Spike celebrates (and elucidates) the early railways, canals and roads of the area. His particular favourite is the old Kick and Push. I love it for the name alone! Here's a link should you wish to shop.

Jane and I wandered all the streets radiating from the village centre - baffling by car. We found our way to the riverbank. We admired flower gardens and made friends. We ran out of daylight - and energy - before we had time to tell all the stories, talk to all the neighbours, take all the photos.

We were badly in need of tea, but the former highly rated Waterfall Tea-room with the amazing relief 'sculpture' on the river-side wall, and the astonishing porch, is no longer operating.

Posted by Ancestral Roofs at 2:41 PM