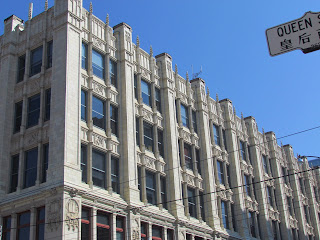 Going back to Toronto for a week of museums and photo opportunites with old architecure this week. In preparation, I'm browsing this neat walking tour guide to plan my darts from worthy building to worthy building. In the fine weather I trust my instincts on my wanderings, but with hypothermia a real and present danger, it's best to strategize a bit.

One spot I'd like visit is the exhibit of photos of Toronto's Art Deco/Art Moderne buildings (photos, I expect, because few of them are still extant) at the St. Lawrence Market. Found out about it on this super website Spacing.ca/Toronto - first visit of many!

One exception to the c.20 modern heritage casualty list of course, is this rather well-known Queen Street structure, the Wesley Building. I got the photo above last spring, by standing on a group of pedestrians to avoid having to capture the traffic clog blocking the ground floor storey.

What's most notable about this building is the fact that the three main facades are covered in neo-Gothic motifs created in terra cotta. Although I've never seen closeups of the details, I read that the pilasters, parapets, and the horizontal band on the second floor depict medieval church imagery. I would love to check it out in detail somehow.

This is 299 Queen West, built in 1913 (when Toronto really was Toronto the good)  for the headquarters of the Methodist Church in Canada, remaining the home of the newly formed United Church of Canada (1925) until 1959, gradually giving way to Ryerson Press, the church publishing arm.

If I'm not mistaken, after a number of media related iterations, the building's now the home of extremely funky CityTV/Much Music building - I've seen throngs of tweenies outside in eager anticipation of the arrival of some unknown (to me) Bieber clone.

Here's the heritage designation report on the Wesley Building.

And here it can be found, on Wikipedia\s list of the oldest buildings in Toronto. Toronto, here I come. I'm tired already.
Posted by Ancestral Roofs at 8:50 PM