Seems I mistook signs of aging for building-owner neglect in a recent post about the endangered Henderson Building. A casual chat with Lois, building researcher extraordinaire, disavowed me of that impresssion.

According to Lois, Tom Boretski purchased the building years ago, when it was threatened with demolition. The city's plan was to create a lane to provide access to riverside parking (which itself was likely created by demolitions over time). Lois herself went to council to argue for the building's preservation. Although we get discouraged about our historic downtown, there have always been rays of hope. This was one.

According to Lois, Tom Boretski "ensured the stability of the structure", and brought it up to code for residential/commercial use. In her words, "it's a keeper."

Another ray of hope for our historic streetscape. 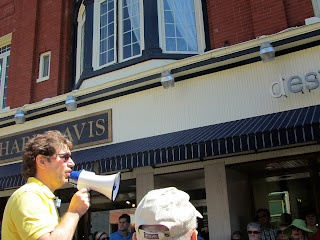 Another downtown booster is the fellow who owns the Richard Davis menswear shop. He shared his downtown vision in May, with a large group of Jane's Walk participants .


And on that optimistic note, I'll close on this. In mid-November it was reported that the demolition order for the Henderson Building had been withdrawn, while the owner considered other options. "No promises."
Posted by Ancestral Roofs at 1:51 PM