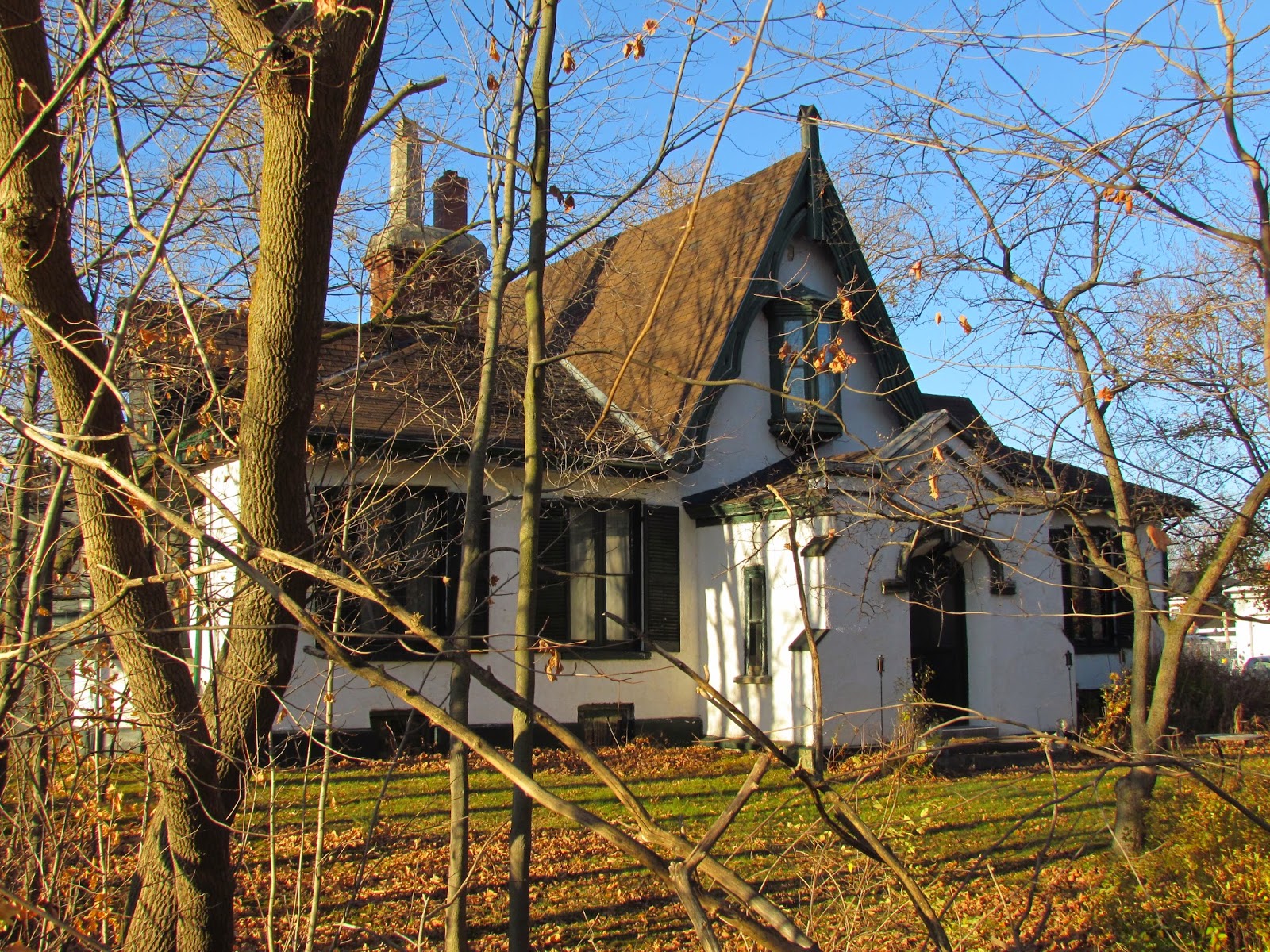 I started to worry about this wonderful Gothic whimsy at left, back in 2011. Well, I worried about it long before then, to be perfectly accurate, but brought my concerns to the blog back in February and again in November of that year. I worry a lot.
Sometimes things turn out. Like the happy ending for the c.1835 David Gibson stone house on Victoria Road, and the c.1837 Van Blaricom home in Sophiasburgh, Not to mention the most worthy and fortunate houses rescued by the dedicated Brisley family near Demorestville , or my maternal ancestor's stone house which was lovingly and expertly restored by the Gibbins family (who went on to add a few rare log structures to the domain.)
I had a wonderful opportunity to meet the Brisley and Gibbins houses and their people during interviews for articles I wrote for County and Quinte Living last year. The Brisley's enclave features in the Spring 2014 issue; I wrote about the Gibbins' homes that summer. 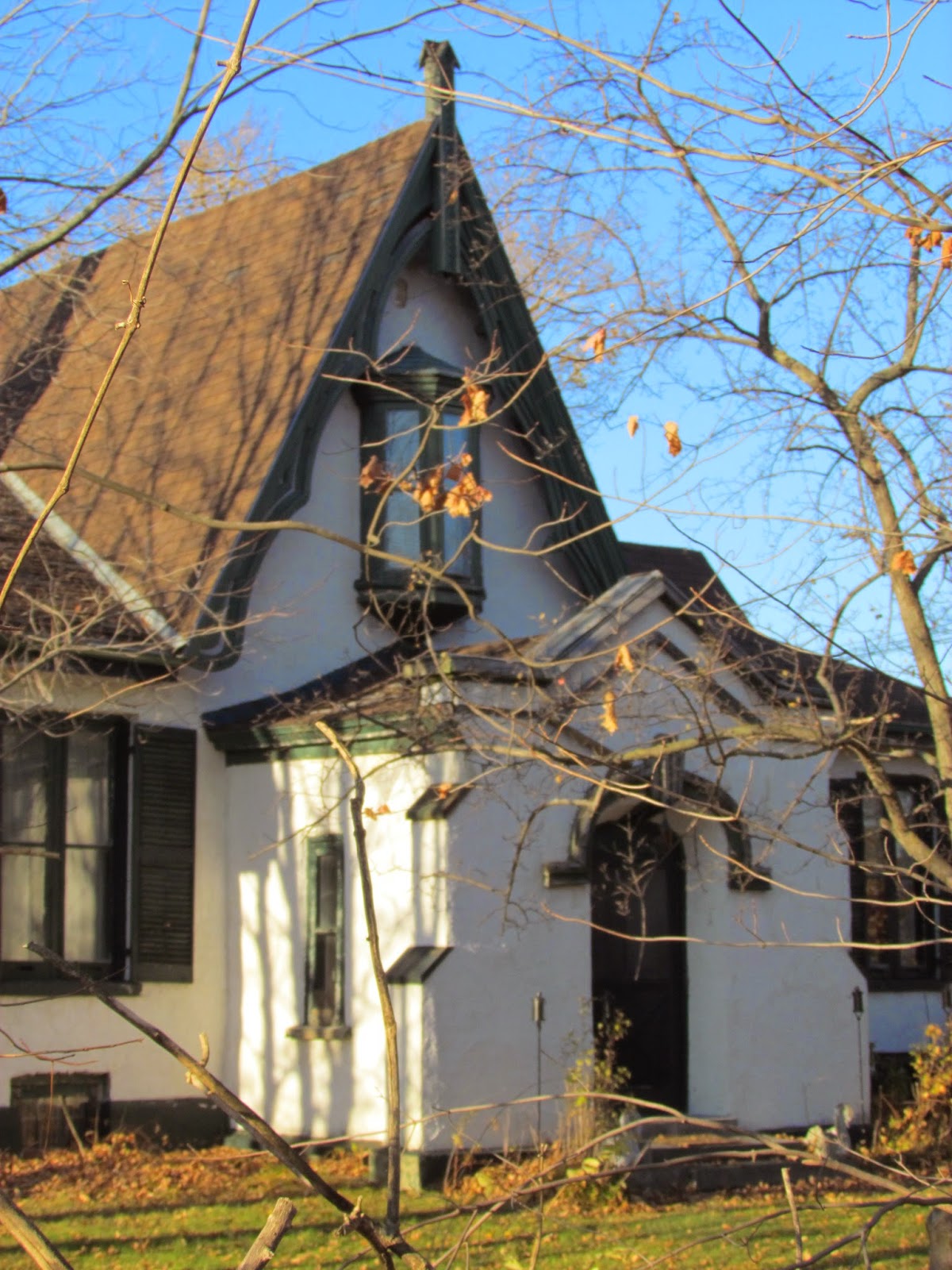 But back to the little white stucco confection in Picton. The former Downes/Allison/Falconer house has been purchased, saving it from further shame and embarrassment as it sits isolated and deteriorating in its tiny treed park, surrounded by not at all sympathetic commercial development, and asphalt, acres and acres of asphalt.

The lucky house (and by extension, the lucky town, which has lost far too many of its historic and appealing buildings in the past 30 years) has been purchased by an informed and experienced owner and restorer of older buildings. I won't say more at this point (although it may well be that Picton readers know) as I never believe in sharing other people's news. Not until I take the new owner up on his invitation and enter this intriguing old house, which has had such a fairy tale appeal for me since childhood, when it was one of my 'castles.' 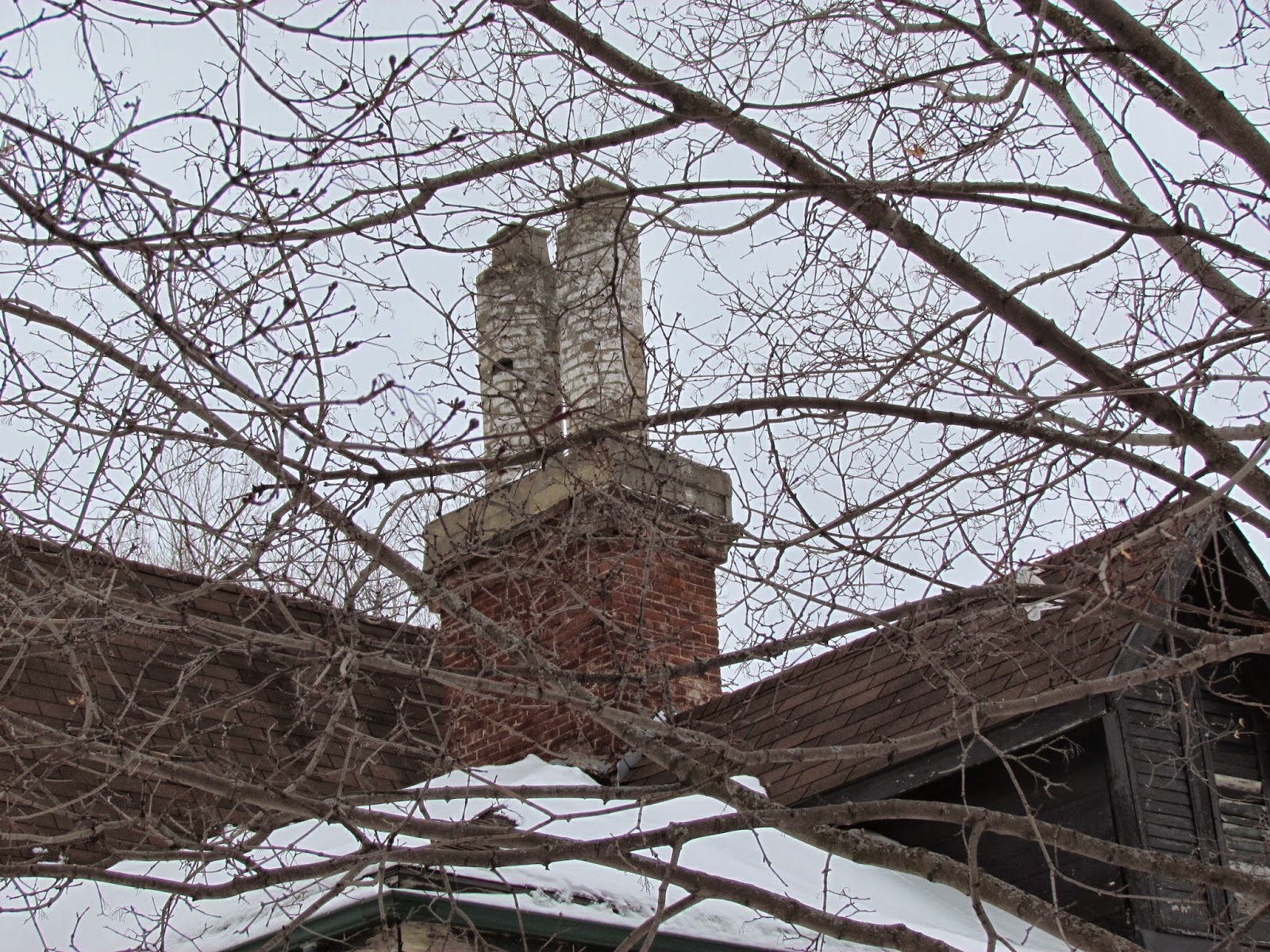 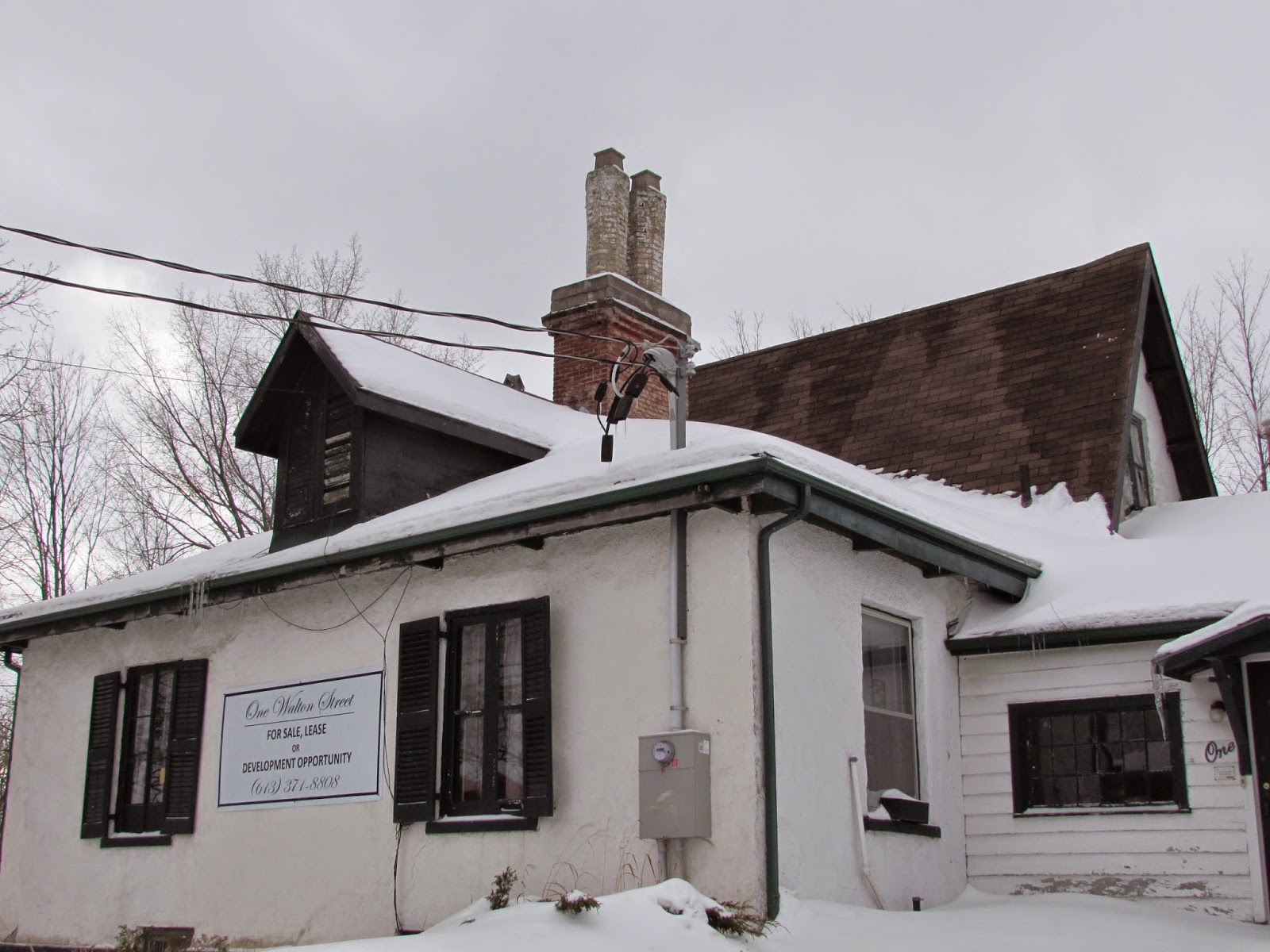 The Settler's Dream contains Stokes' and Cruickshank's exquisitely detailed description of its Gothic character, which I will quote with admiration: "The Tudor period is well represented in the vestibule with its boldly buttressed form and labelled doorway, and over the entrance the steep gable, whose roof runs from front to back of the house, has a bargeboard which might be interpreted as Elizabethan. The charming oriole goes even further and suggests the Jacobean. But the chimneys set back well within the building, hark again with their clustered polygonal flues to the Tudor..." (p.227)

The Downes house was the home of prominent Picton citizen Captain John Pepper Downes (1801 - 1878). I have  a set of 12 reproductions of Captain Downes' pencil drawings of Prince Edward County, reproduced by the PE Historical Society. The historic photo of the house on the wrapper would be worth the price of admission alone, showing the picturesque chimney pots intact, and the Gothic bargeboard and finial crisp and fresh. The elegantly attired folks on the front step - and the width of the ladies' skirts, suggest the photo might be from the 1880's. (I'll look it up when I stop looking at it.) The title describes it as 'after 1857'. 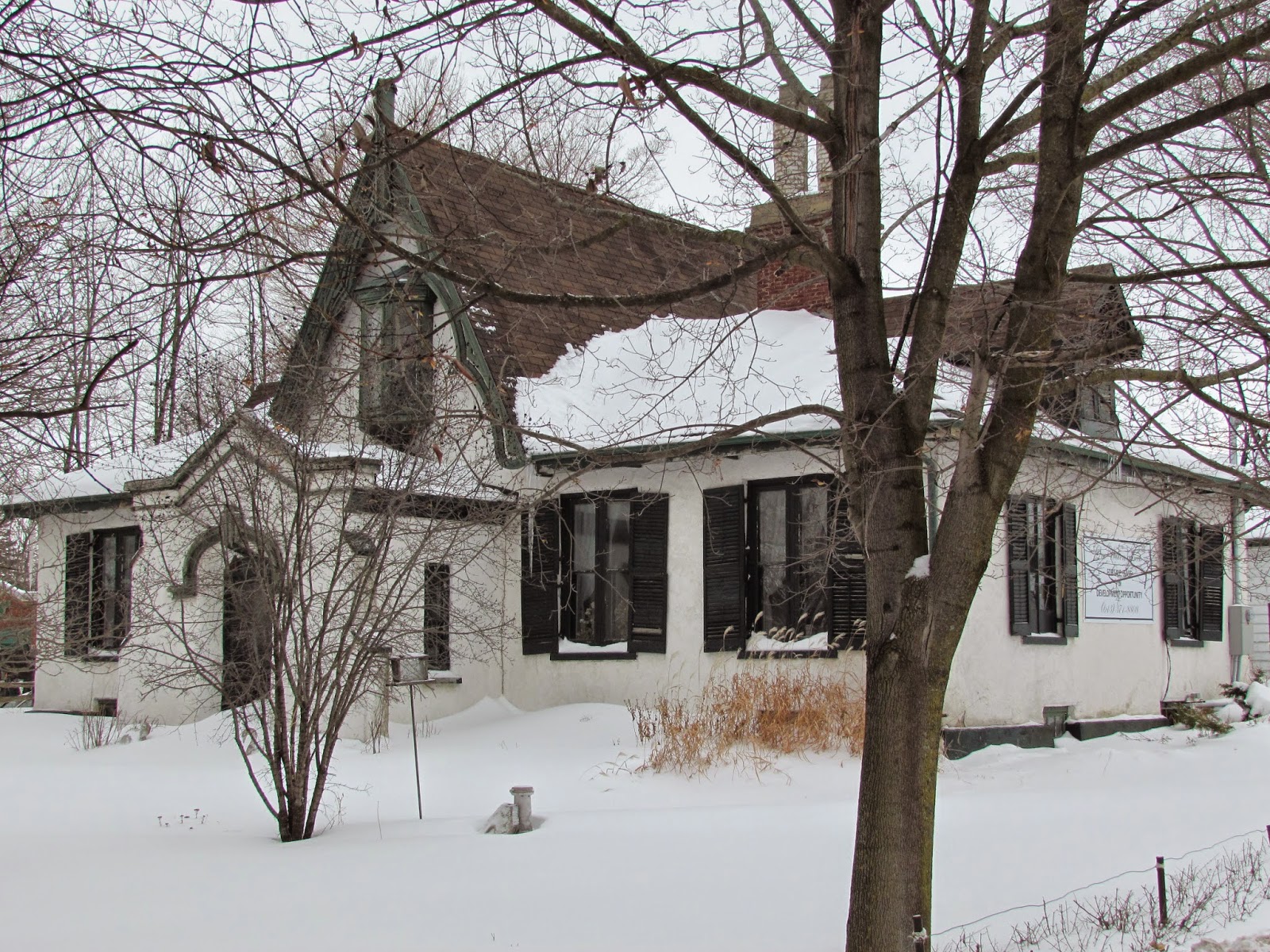 Downes was active in civic life in the early days of the town, but to most his legacy is these wonderful prints - scenes of the townscape and important buildings dating from 1847, the year he took up drawing in earnest. There are lovely captures of the harbour, the very English countryside looking hills and dales around the town and views of Main and Bridge Street lined with businesslikee frame structures.

But the most intriguing print is titled 'Captain J.P.Downes' first home near Picton.' Now we all know that 'near town' meant entirely different things in the day when towns were more compact and trips townward were made by horse and foot. Indeed, Belleville's Glanmore was a county house on a self-supporting acreage at one time.
So, is it reasonable to think that this little house with a bank in its front garden might once have been considered 'near' rather than 'at' the Tim Horton's epicentre of the place?
And we also know that houses were improved and embellished with newer styles during their long lifetimes.
But nowhere have I read what seems to be logical to me.
The drawing of 'Captain J.P. Downes' first home near Picton', is this house, Gothicized. My reason for thinking this is the hip or Ontario cottage roof, over which the peaked Gothic gable is perched.
And the large Regency style windows. A typical 'Gothic' Ontario farmhouse, centre gabled, would have been less likely to have a hip roof under all the peaks.
I compare the photo and the print (which I have just sought permission to use, to help you see my point). The proportions are the same. The house shows in the drawing as dressed stone originally, which evolves nicely into stucco cladding in many contemporary homes (and which return sometimes reluctantly, to their stone origins).

Time will tell. A visit may reveal a bit of limestone under a failed bit of stucco. Or the new owner may know. Heck, everyone may know! I long for a visit to this house, to capture some sunny day photos that express my joy at seeing it purchased and waiting for restoration.

Posted by Ancestral Roofs at 3:44 PM