If you visit this blog regularly you may have run across one or two posts in a series I call 'Journeys with John' (here's one now) - in which I visit  homes featured in that superbly clear and accessible work on architectural styles written by John Blumenson, entitled (unambiguously) Ontario Architecture. In the posts, I recap the key points made by Mr. B (for this is my personal journal and research notes after all), and post my own photos of some of the buildings he features (the ones I've managed to visit.)

So, about 'Travels with Tom'. Readers may also be aware of the esteem in which I hold Tom Cruickshank whose many books on our built heritage have played a significant role in its preservation, through education and celebration of our old buildings. Books like The Settler's Dream, Rogues' Hollow and Old Toronto Houses should be on every bookshelf (and taken out often.)

For some time, I have long hankered after a copy of  Mr. Cruikshank's Port Hope: A Treasury of Early Homes.


Now thanks to the good folk at Belleville Public Library's Interlibrary Loan department (and the generous lending policy of the Picton Branch) I have a copy of that work until March
March 29th!

(Not to whinge, but that same day I picked up two other ILLO treasures, which BPL found for me at OCAD - for a measly 2 week loan (oh well, if a future design student who will dedicate her life to historic preservation needs it, I'm good with that.)

Anyway, thought what I might do is compare notes (and photos, though with John de Visser behind the lens, doubt that much good for my confidence will come from that!). It will be interesting to see what Tom has to say about buildings that impressed me on my several walkabouts in that lovely and heritage-attuned town. And if it encourages you to pick up the book (again), Picton's copy will be available in mid-March!

A final note in this preamble. Regular readers will already be aware of my love for Port Hope; I have visited and written about it many times. I've included (entirely trustworthy) links to former posts .


So. Starting from the top. If you peek inside Mr. Cruickshank's book, you will see an archival photo of Canada House c. 1822 with its encircling verandah, a small building beside it, and the business-like treeless terrain of early business-like towns. Canada House still sits close to the shore, recalling the bustling lake port days when it was the haunt of sailors and captains.


In 2013 I wrote about Homewood, a Colonial Revival summer home for a wealthy American nostalgic for the styles of the colonial days of the 1770's. A great hilltop property, treed and elegant. I fell instantly in  love with it, and took photos humbly from the sidewalk. Mr. de Visser got behind the fences!

Next is the elegant Metcalfe Terrace with its Greek Revival touches - painted pilasters, eared trim on doors, wide cornice with knee hold windows. A prestige location then and now. Peter John Stokes had a hand in preserving this wonderful town, and will always be associated with it in my memory. We lost him the summer of 2013. I found this lovely tribute to Peter Stokes, who was a Port Hope resident and a heritage preservation giant,in a Niagara newspaper.

This yellow house behind the shubbery on its exquisite treed lot is The Octagon, built in 1856 by William Barrett, Jr. Esq. Mr. Barrett was impressed enough by the slightly wonky ideas of Orson Squire Fowler, to build this eight-sided novelty for its touted salubrious effects. Mr. Cruickshank suggests its one of the best examples of the style in Ontario; on page 16 I finally got inside its doors. 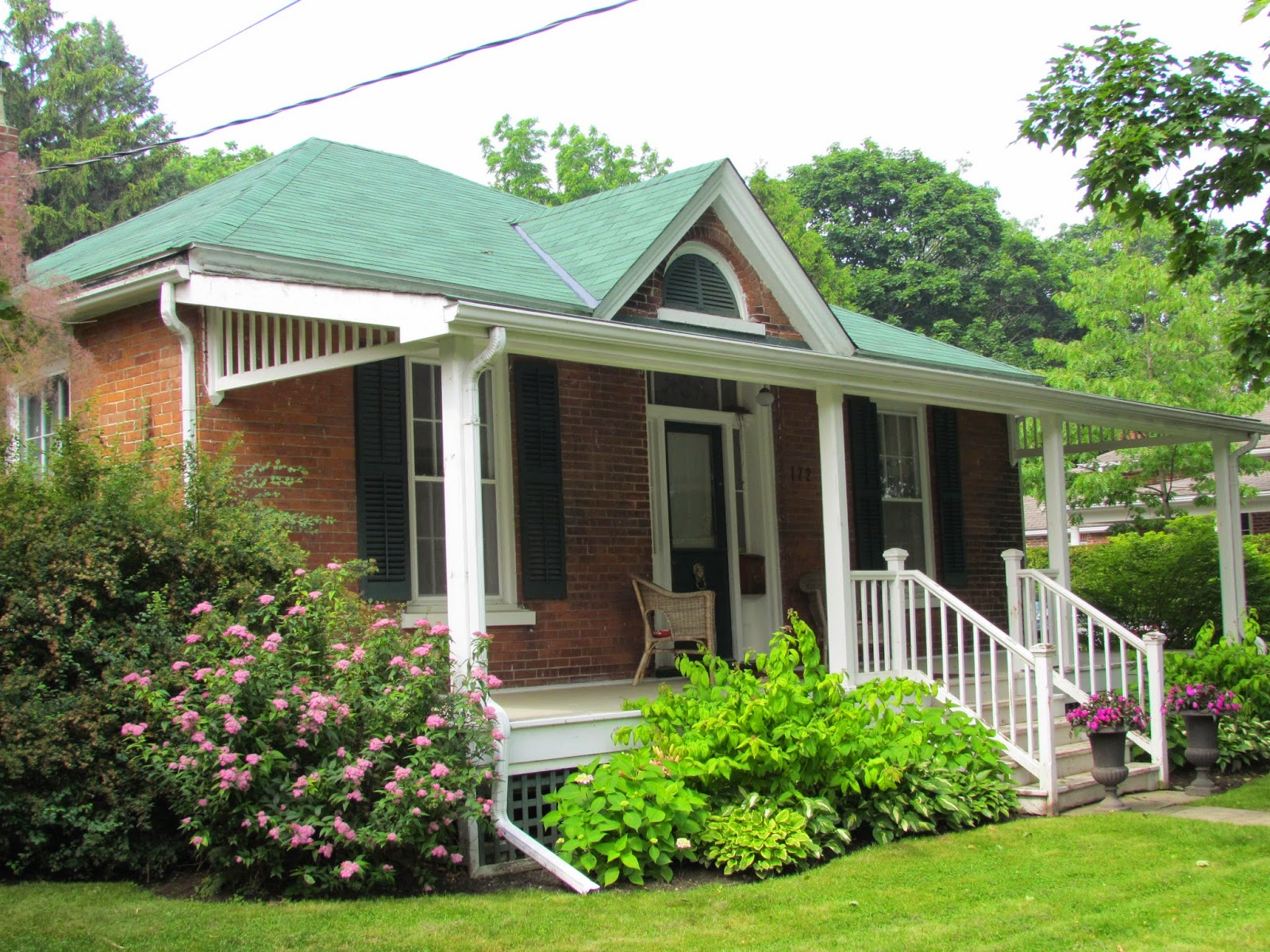 Port Hope: A Treasury of Early Homes also does justice to the many Ontario cottages which dignify the town. I paid my homage a couple of years ago also.

After lunch, which I will take while reading further, I'll resume my walk around Port Hope, and share more interesting bits about Port Hope's built heritage (a la Cruickshank.) Walk along with me? Won't be too strenuous - there will be lots of stops. Guaranteed. 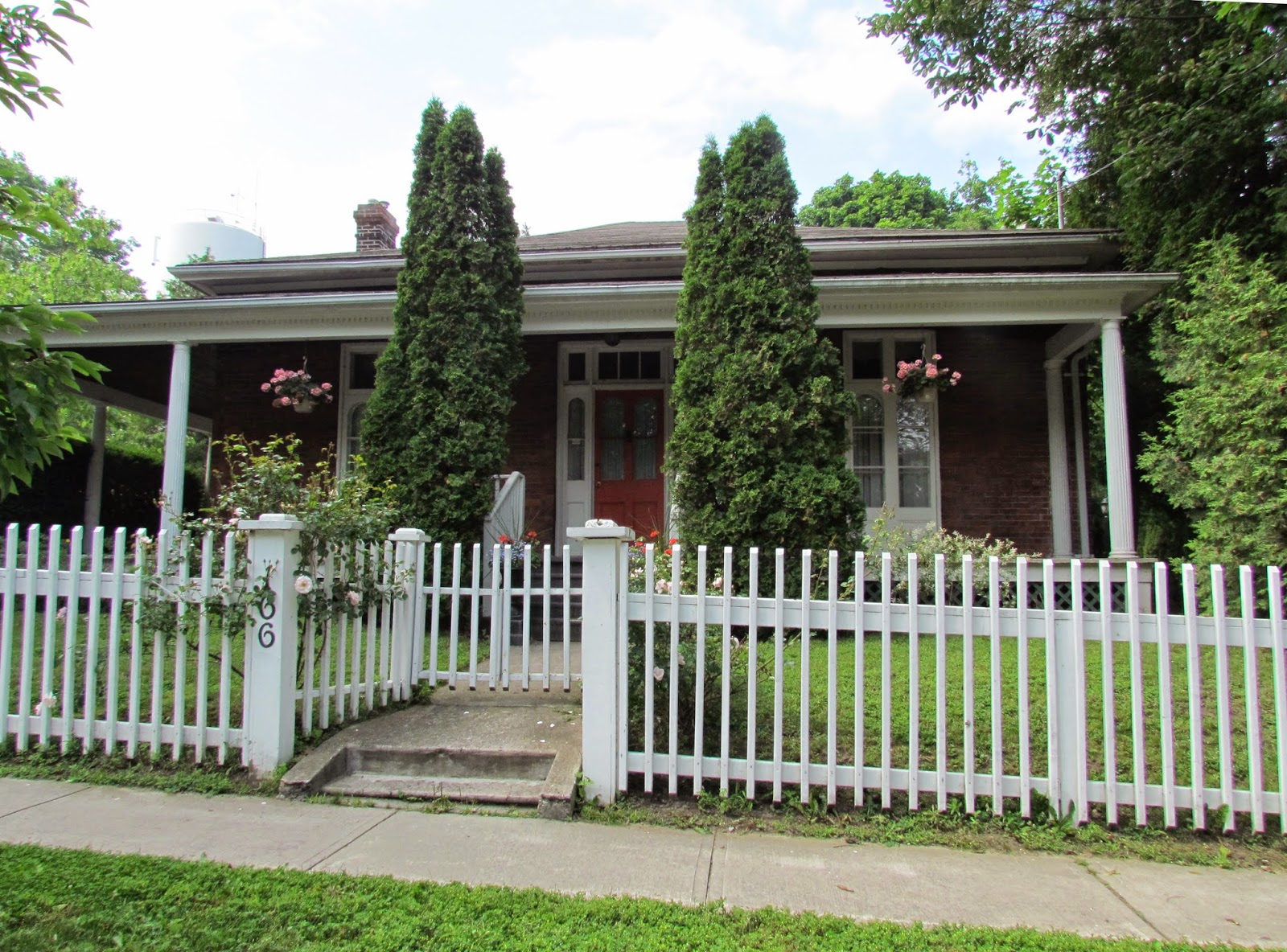 Posted by Ancestral Roofs at 1:44 PM