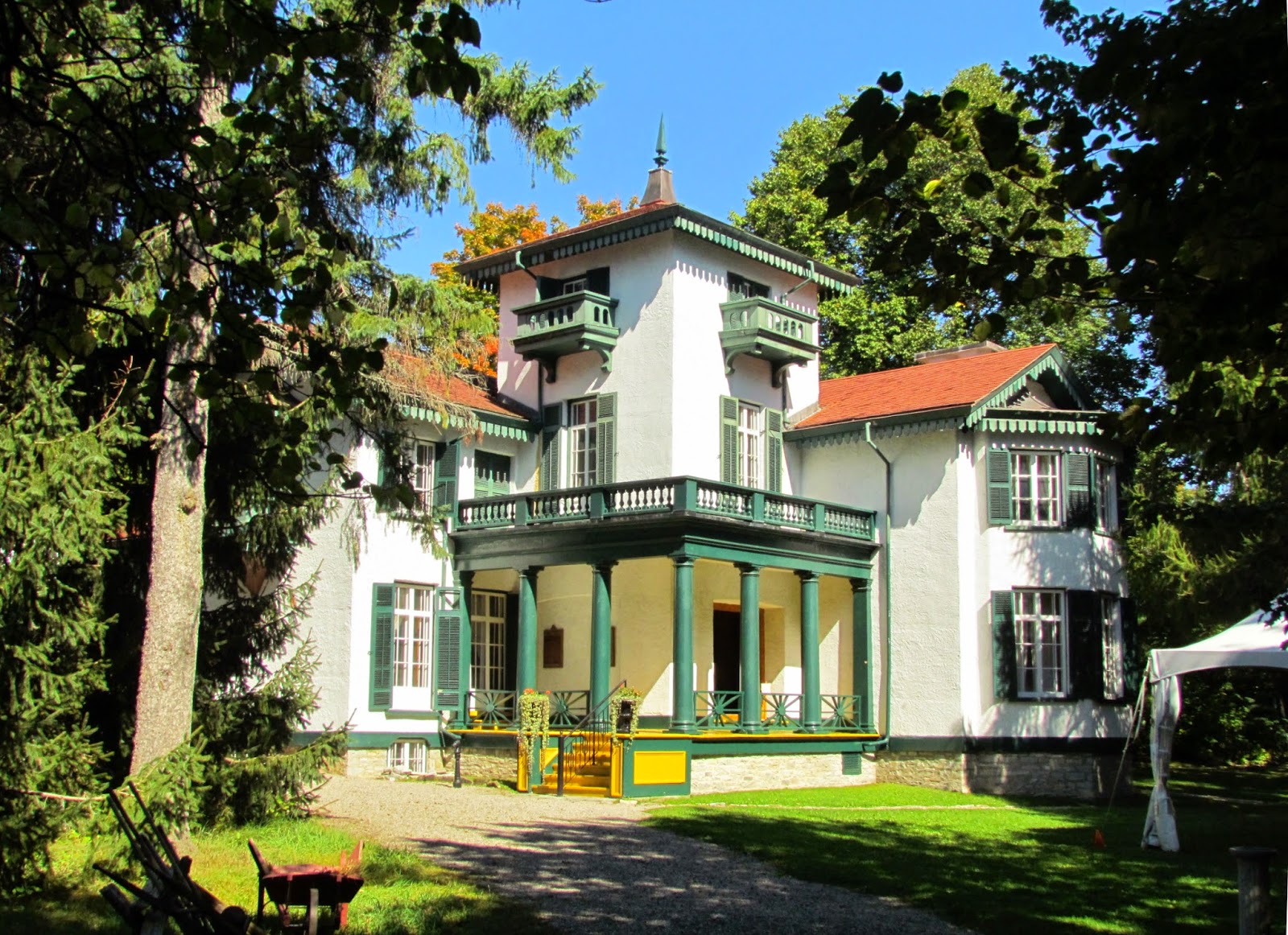 Bellevue House in Kingston is the cover girl for the Parks Canada book Architecture of the Picturesque in Canada (Janet Wright, 1984), and I cannot think of a better candidate. For Bellevue House, built in 1838-40 features the Italian or Tuscan Villa style, a picturesque classical alternative to the Gothic Revival of the day. I've read that it was one of the first in Canada by some  accounts; it was certainly ridiculed at the time. 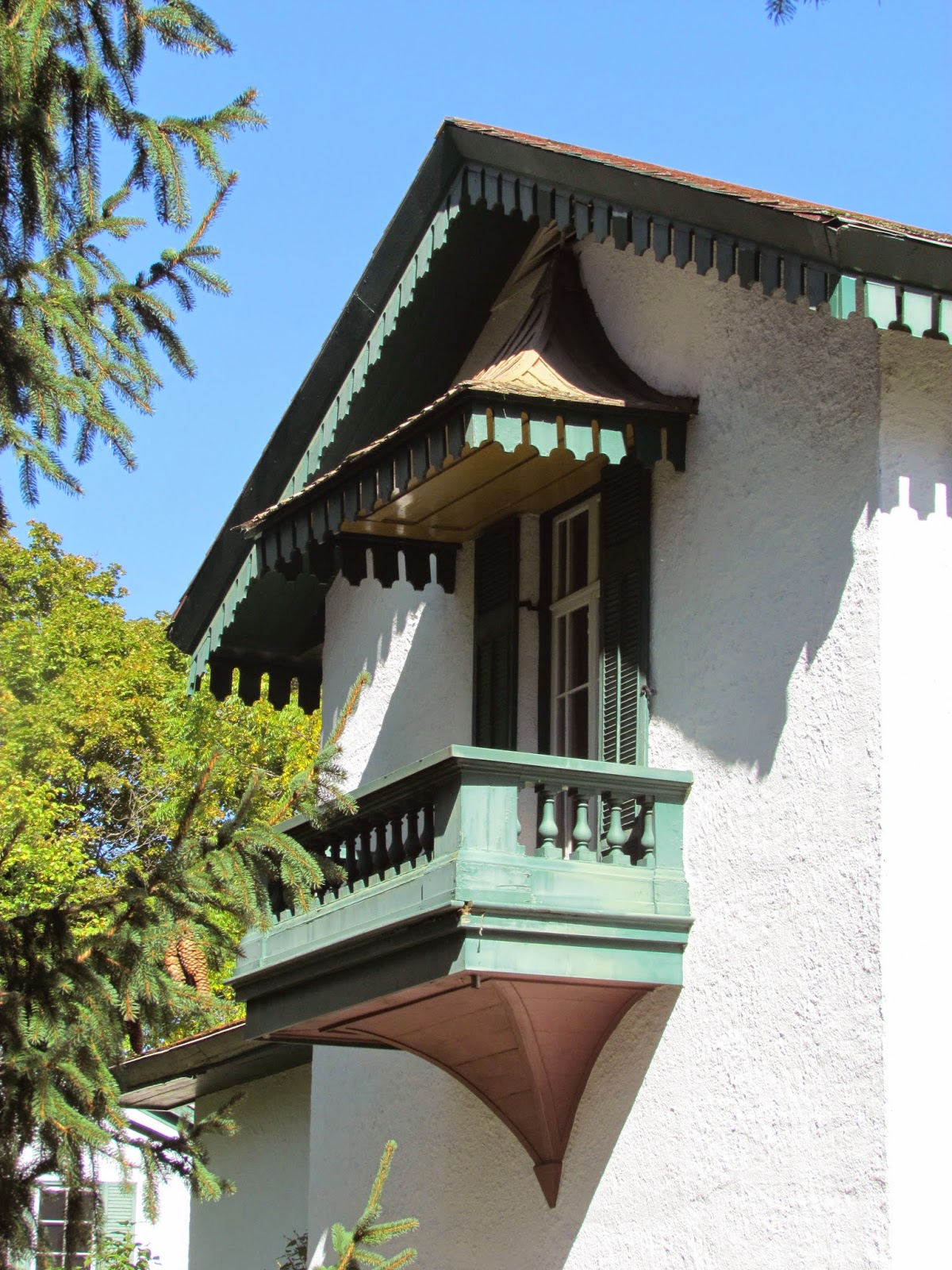 John Blumenson lists the characteristics of the style: asymmetrical roofline, L-shape with tall campanile at the junction, irregular massing, grouped windows, presence of a portico and arcade or loggia, cantilevered eaves, stucco surface the better to observe the play of light and shadow, French doors, and "an exotic flair." 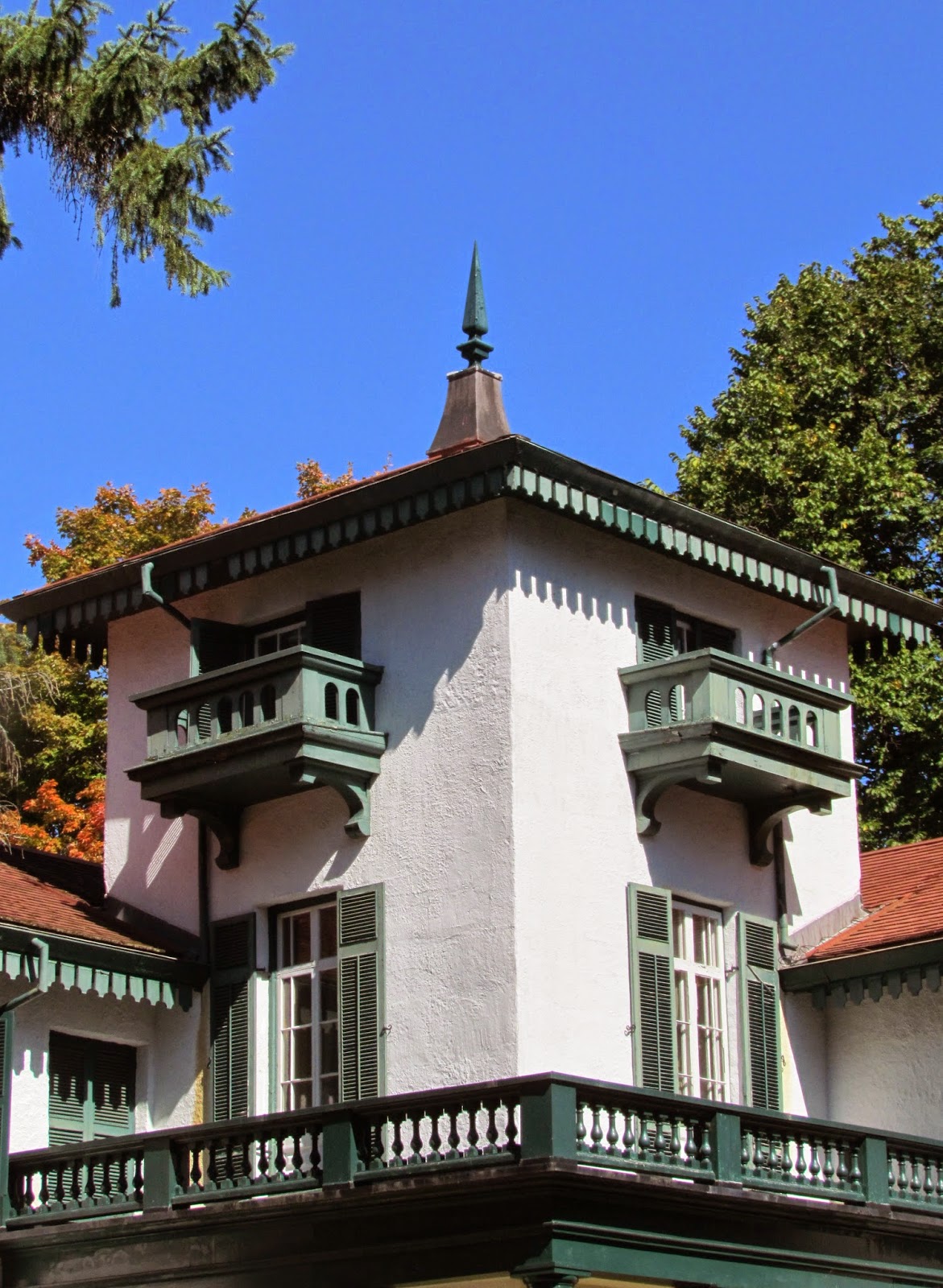 It's such a happy house;  festive pennants from the roof cornices recall for me our visit to the town square of medieval Sienna, festooned for Il Palio, the ancient annual horse-race held in the centre of town. (We didn't see the race, I would have been too worried for the horses). Medieval Sienna? Rightfully so, as the ancient and romantic and picturesque is what the Tuscan Villa style was committed to recreating, in the early days of the c.19.

The sun and shadow play on the white painted stucco over limestone walls. The Juliette balcony with its ski-jump roof, the tower with its boastful finial, the balconettes, the deck reached via French windows, the verandah, the gardens, the orchard all just say Joy. Each time I visit I feel transported somehow.

Bellevue was built by Charles Hales, a well-known Kingston grocer who also built Hales' Cottages, still standing on King Street. Bellevue is one of a number of country estates (a mile from town in the day) to which wealthy merchants were migrating in the 1830-1860 period. Some still stand. Formerly storeowners would have lived in some luxury above their stores. 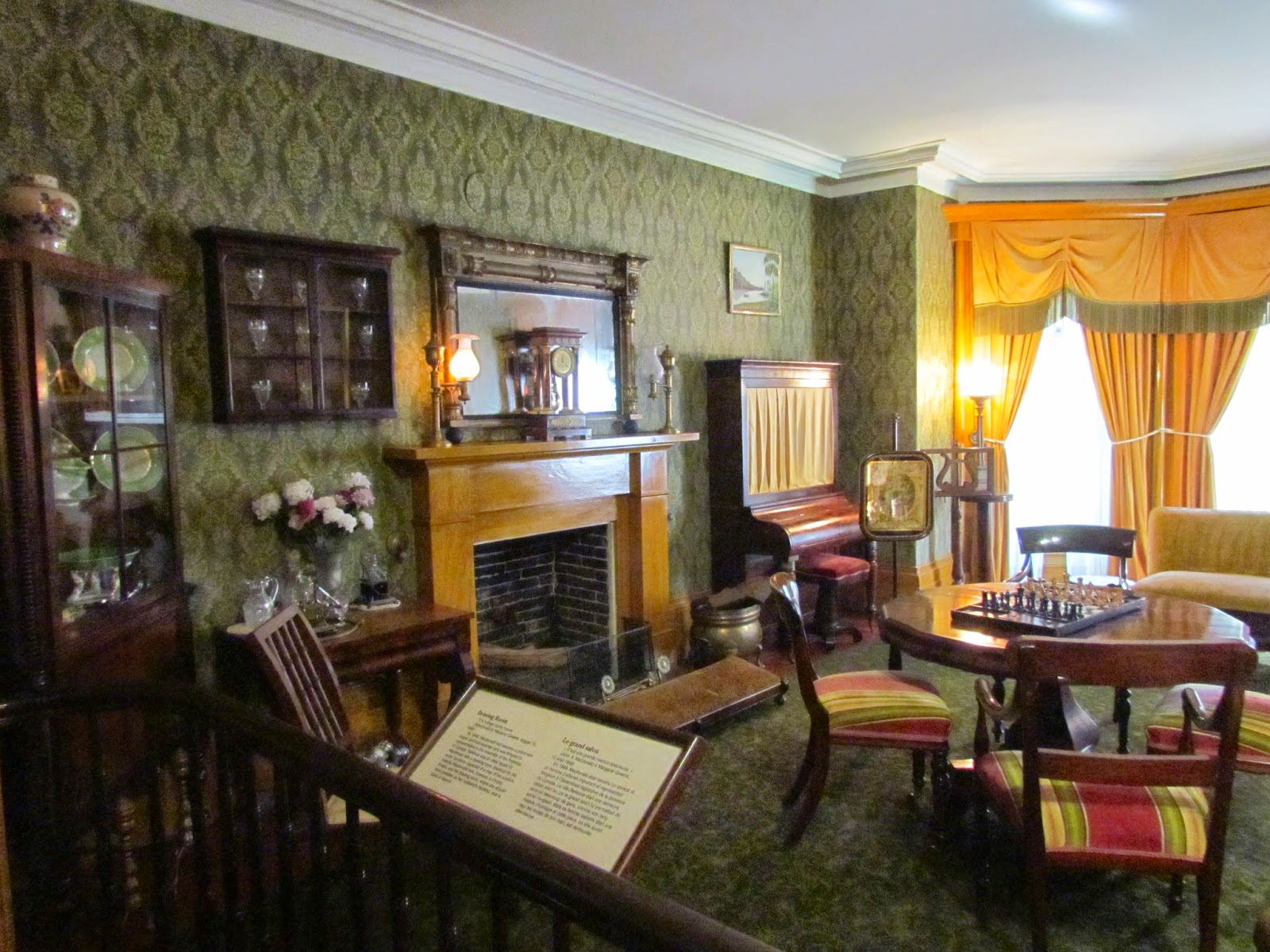 Ironically, Bellevue was not such a happy house for one of its tenants. Young lawyer and Kingston member of Legislative Assembly of the Province of Canada, John A. Macdonald and his invalid wife Isabella resided in the house from August 1848 to September 1849. The house sat on 9 acres in the country, with a vista over the gentle slope down to the lake, and considered a fine bracing locale for the ailing Isabella. It also provided a gracious lifestyle at a slightly reduced operating expense, as the young lawyer, though successful, experienced constant cash flow problems. Tragedy struck - shortly after they moved in, their only son died. 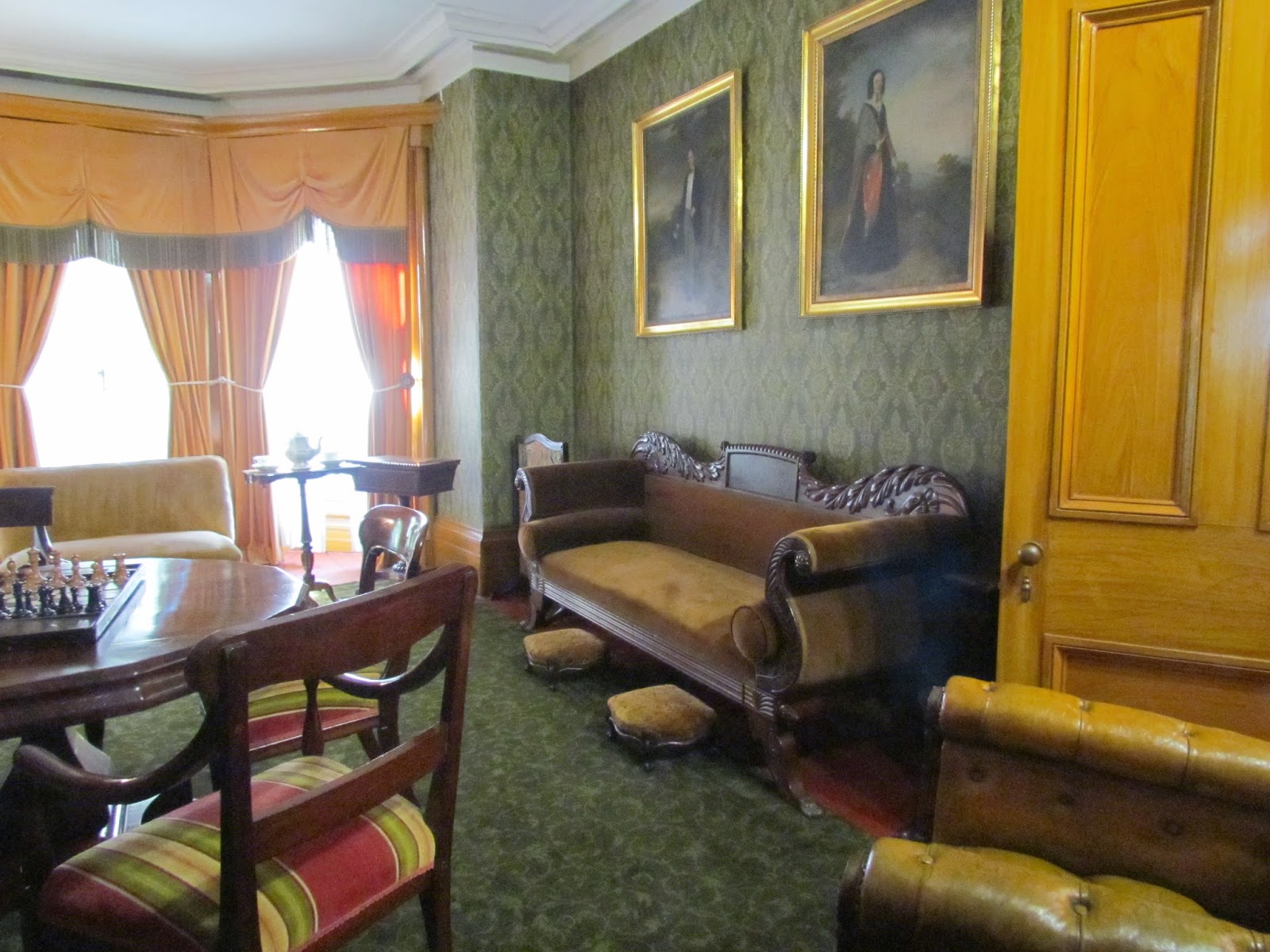 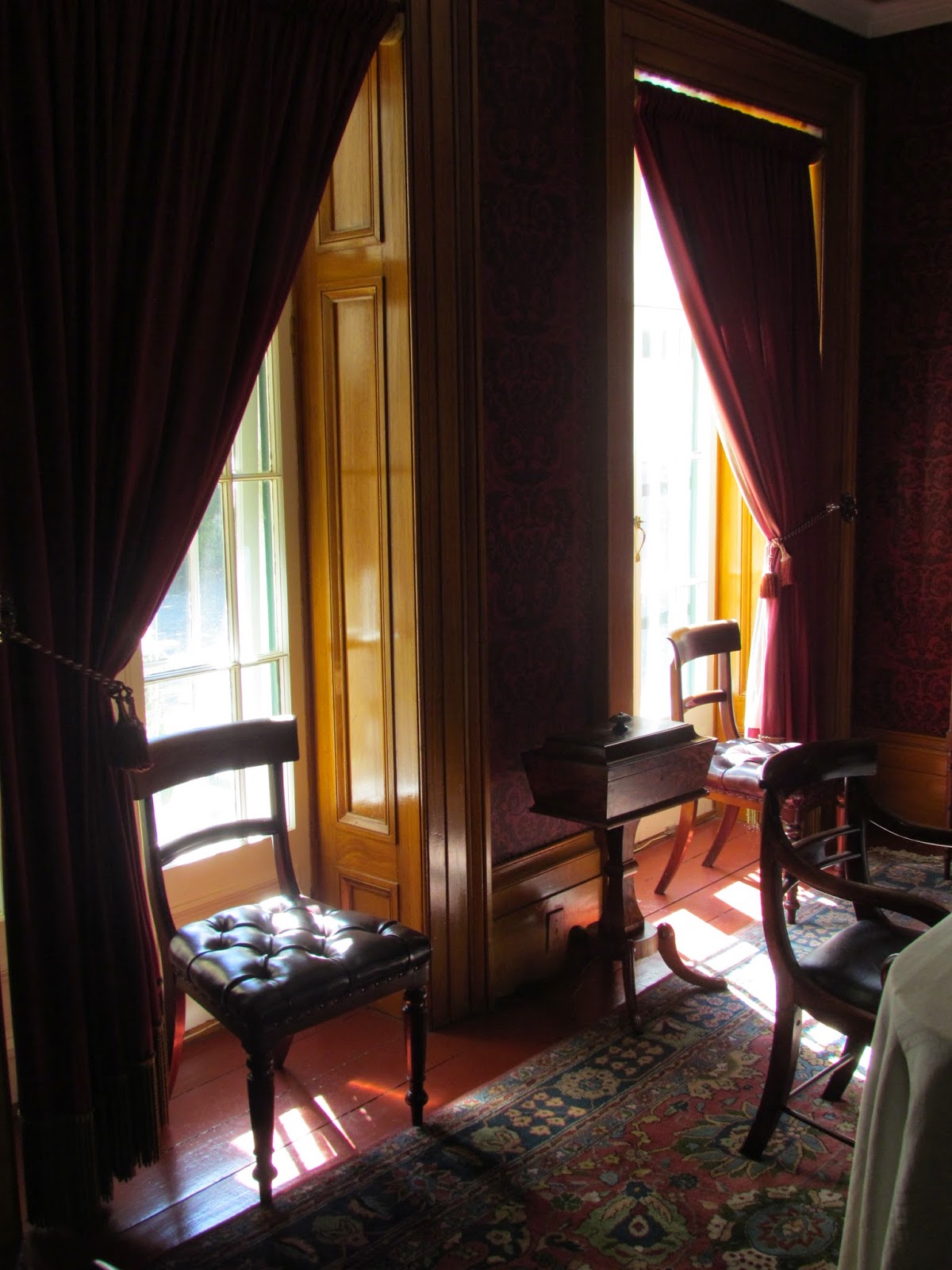 Bellevue's beautifully recreated interior is interpreted in that impeccable NHS manner. Bellevue staff and interpretive panels explain the design choices made by the residents of the mid-1800's thus:"Classical antiquity was seen as the height of sophistication and a time of learning and moral behaviour, and as a result, much copied by the Victorians". Our hosts point out Greek and Roman design features such as columns for chair legs, decorative scroll and acanthus leaf patterns on furniture. 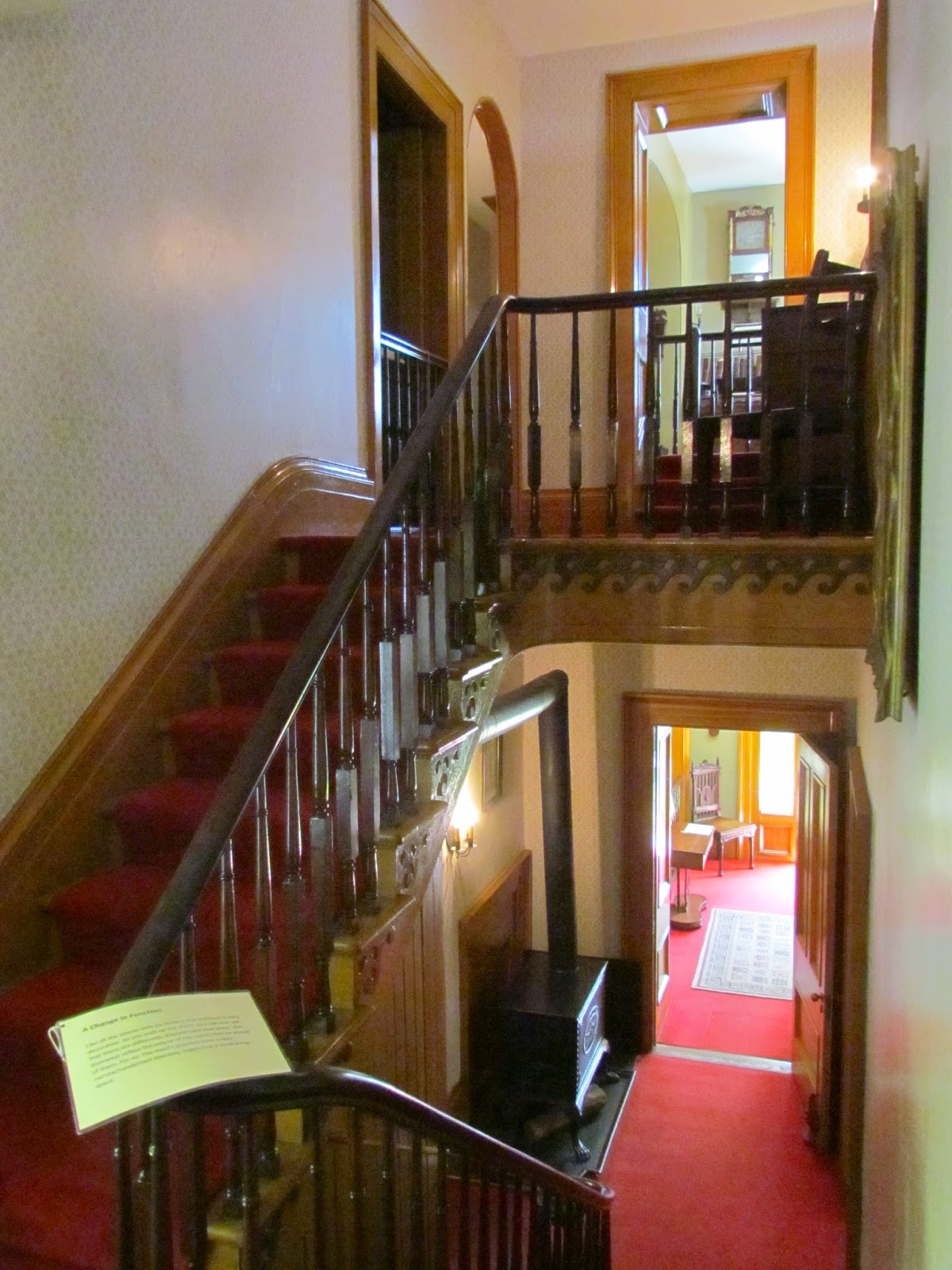 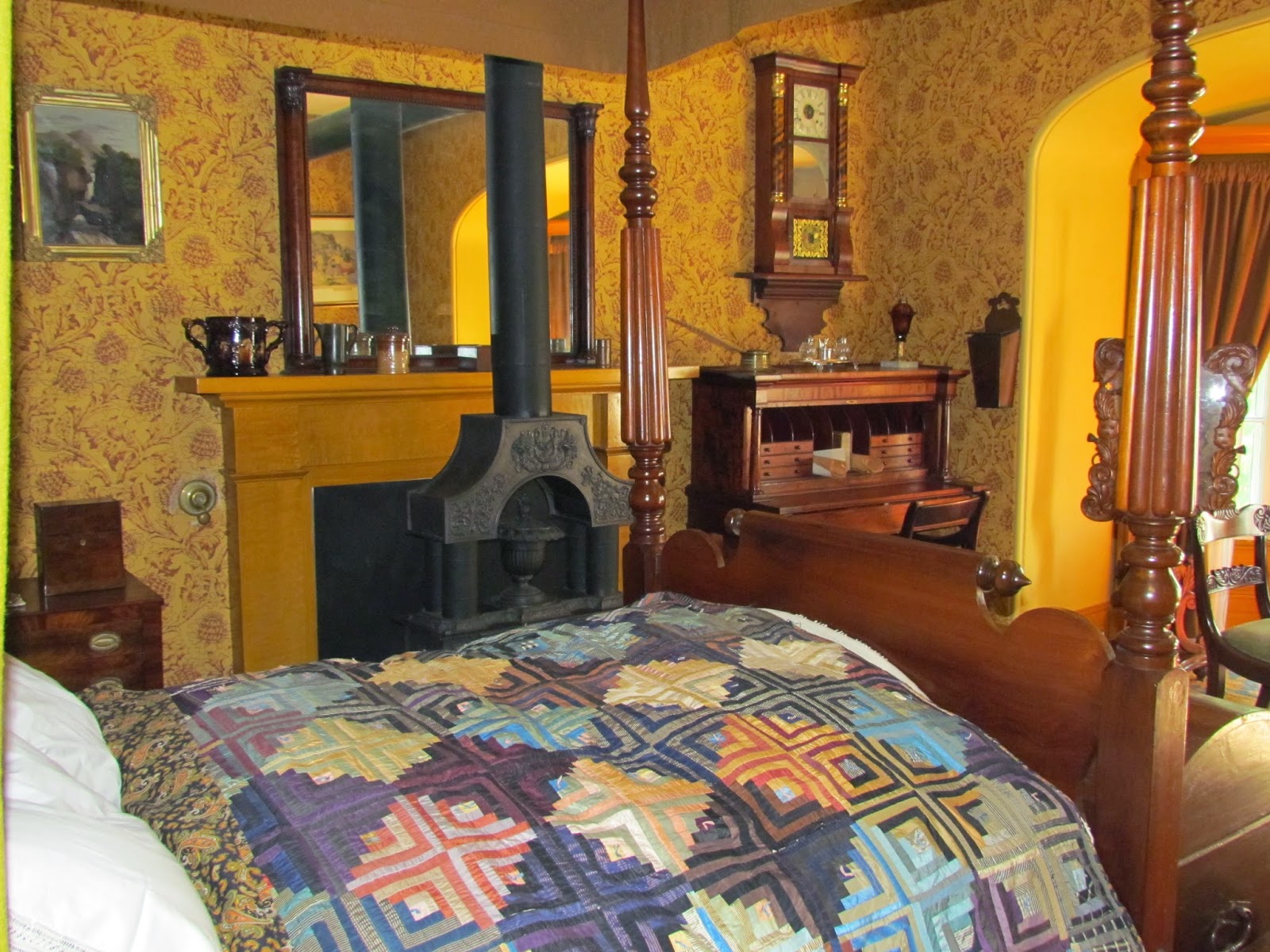 The bedroom of Sir John A. Macdonald. What worries kept him awake in this beautifully appointed room with the wonderful stove)? An invalid wife, financial responsibility for his widowed mother and sister, legal problems to muddle over for his clients. And his problems were just beginning! 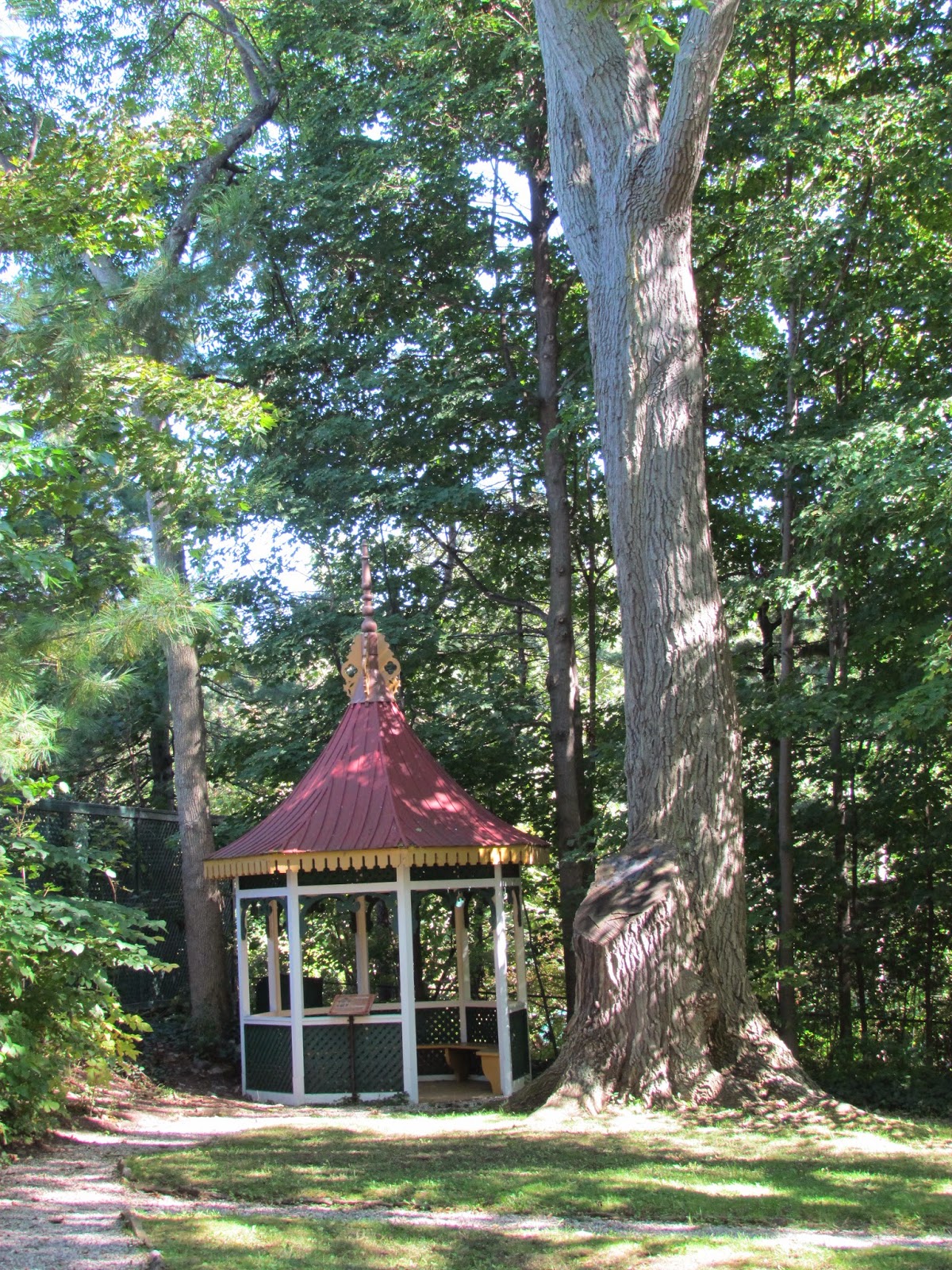 It's a miracle that the gardens at Bellevue have been retained, considering they are in the most desirable section of the city. No modern infill - good on you NHS Canada (my tax dollars happily at work). A grassy orchard, back garden with pergola and massive trees, a kitchen garden for wandering in. 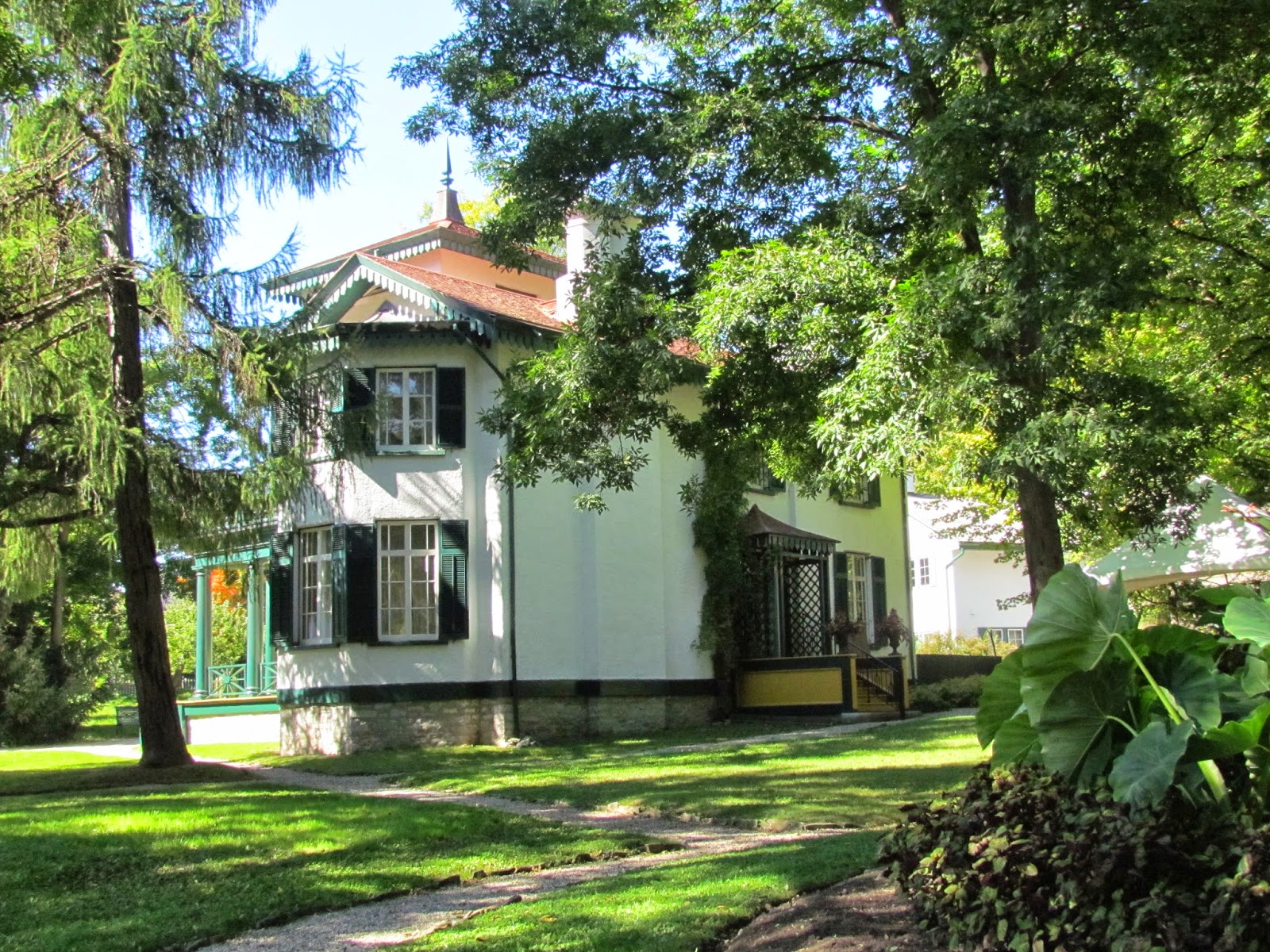 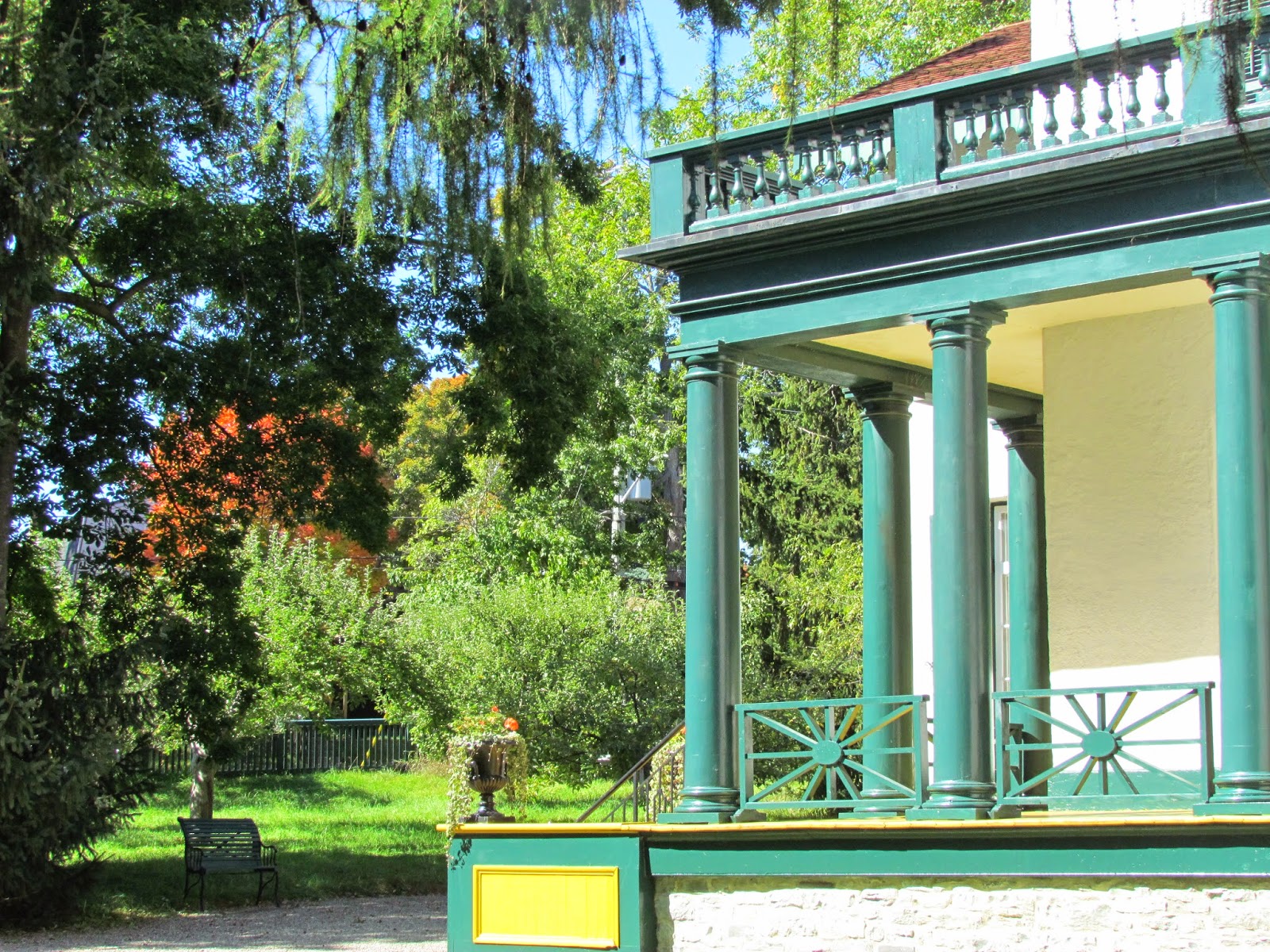 So - on this wintry November day, make a note to yourself. Come the first sunny warm June day, retreat to Bellevue NHS.