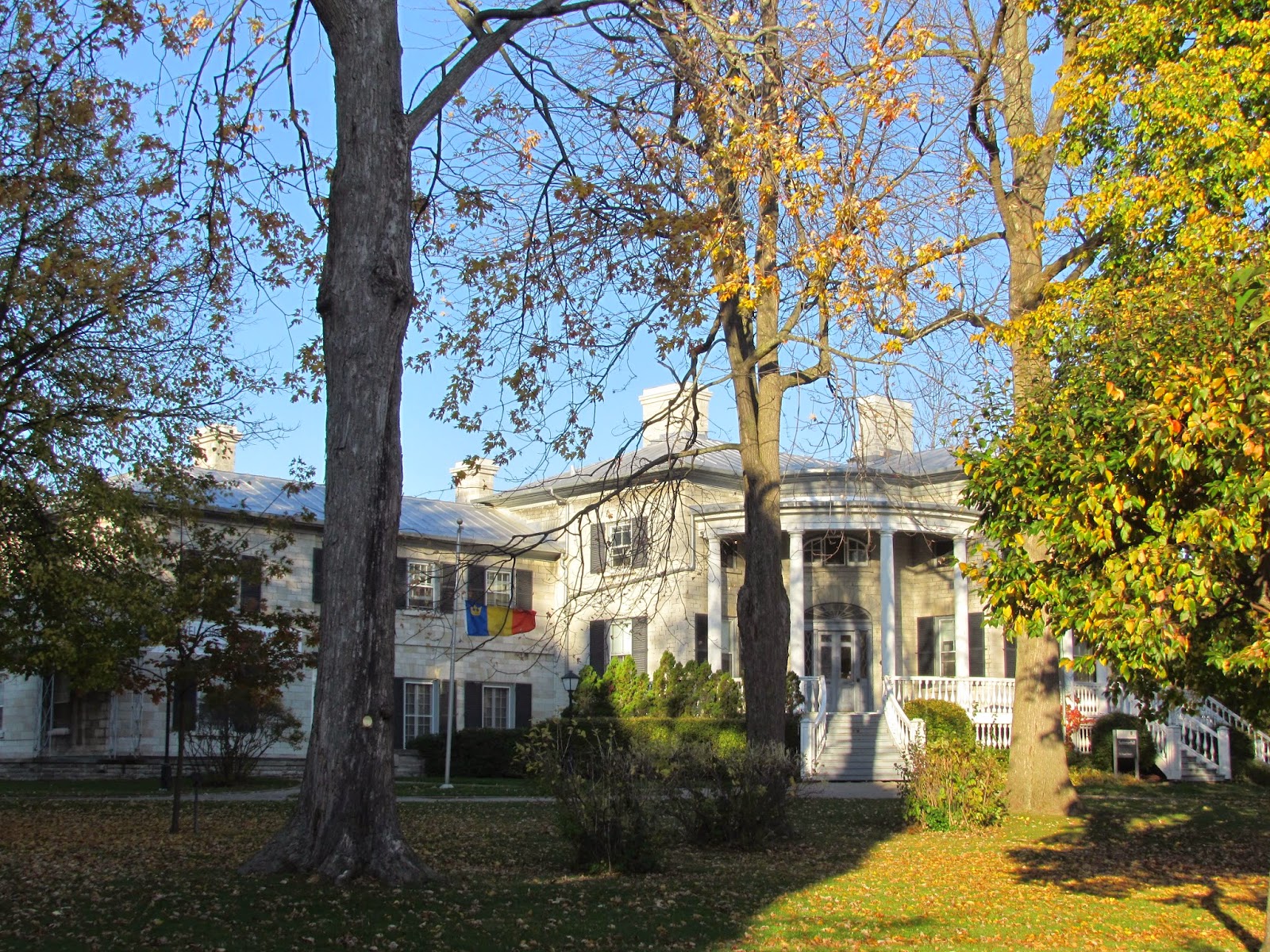 Summerhill...another of the three original buildings of Queen's University, sits grandly on a south-facing hill, with a park in front. Summerhill was built at a fascinating time in Kingston's history - spending time there is a portal to the heady early days of the United Canadas, when Kingston was capital and the future was limitless.

The Queen's Heritage study explains that Summerhill has been much altered but recently renovated, with "many fine features from each stage of development." At the time of the study, the east wing of Summerhill was still the Principal's official residence. 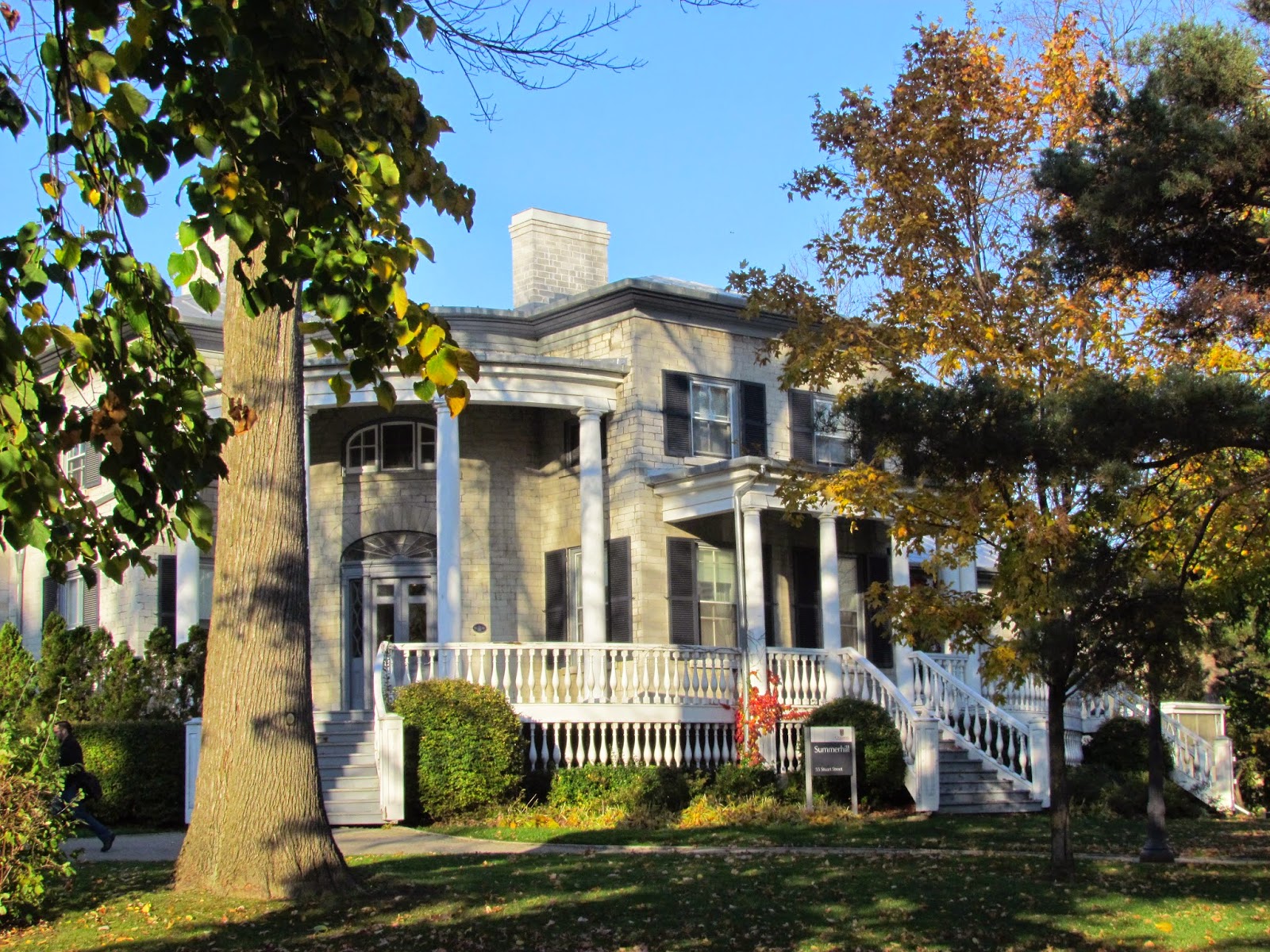 Summerhill is a two-storey Kingston limestone villa with "American Federal influences" - I would have said  Palladian country house form, with Neoclassical refinements? - consisting of a central wing with two flanking wings. Wide dignified stairways approach the centre verandah from three directions; a one-storey portico provides shelter and haughty reserve (this is not a 'set a spell' sort of porch). To either side are matching splendid curved two-storey porches embracing the curving stone walls, with beautiful doorways below - elliptical fanlight, sidelights with curvilinear design, reeded pilasters and moulded entablature. Such presence: columns, balustrades, a massive central chimney, the fine state of repair and the size and dignity of the place, take my breath away, summer or winter.

The OHT plaque on the lawn explains the house history. Summerhill was built in 1839 by Anglican Archdeacon George Okill Stuart (hence the name of the street passing in front of KGH, which now looms large across the park). The house was called 'Okill's Folly' or the Archdeacon's Great Castle. 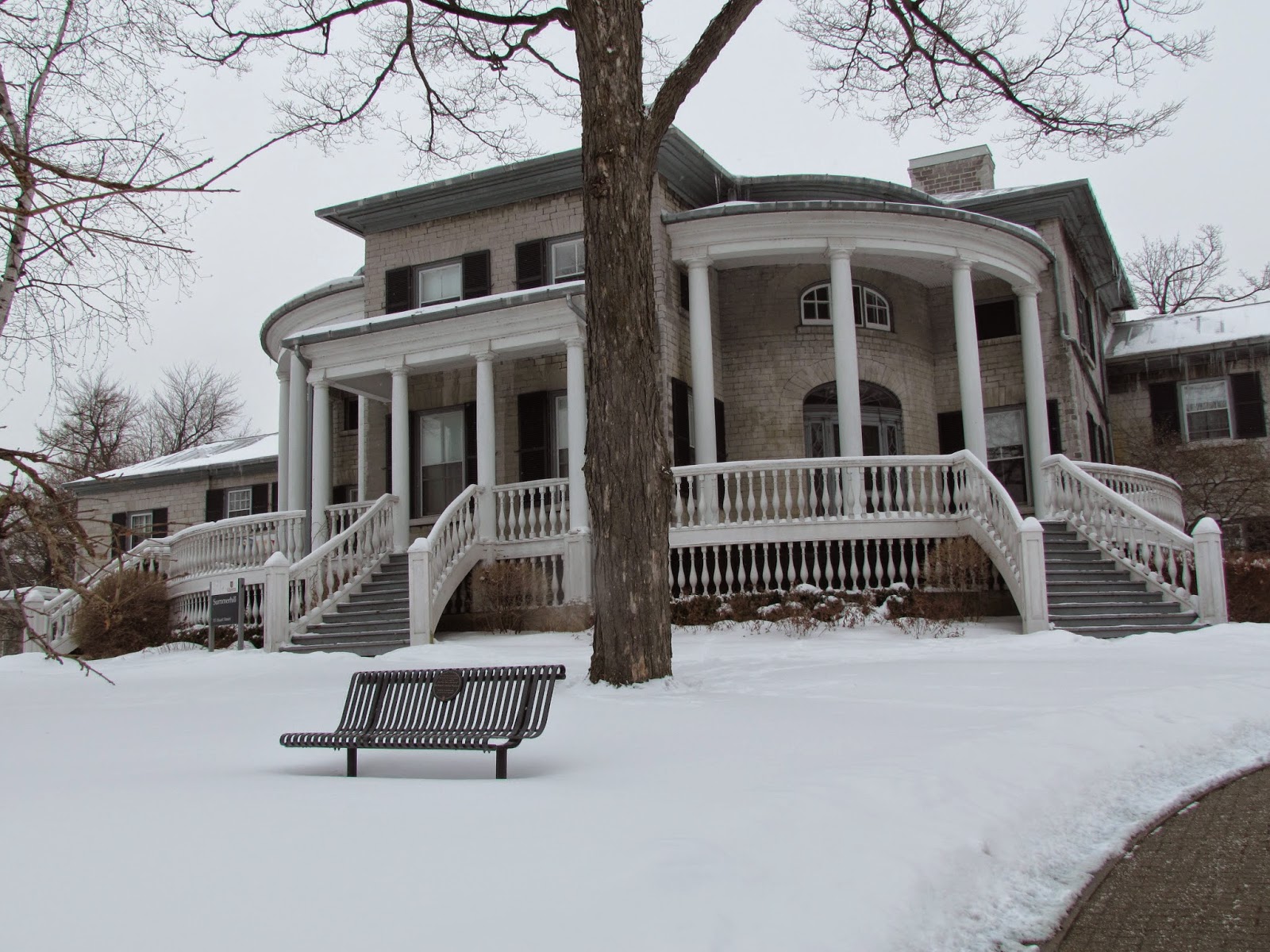 Margaret Angus, in The Old Stones of Kingston, provides a little more of the back-story. She suggests the archdeacon may have overreached himself when he built this place on Lot 24 west of Kingston, on the best part of his inheritance, 200 acres of the 4000 his father, UEL and regimental chaplain accumulated as crown grant in the area.

It's likely that Stuart had inherited the conviction that he was part of a local elite, and that his home must be a reflection of his class - a state of affairs that the ruling elite was confident would take root in the colony (irritants like William Lyon Mackenzie notwithstanding). Unfortunately, it was a bit overbudget, and then there was that damp basement. 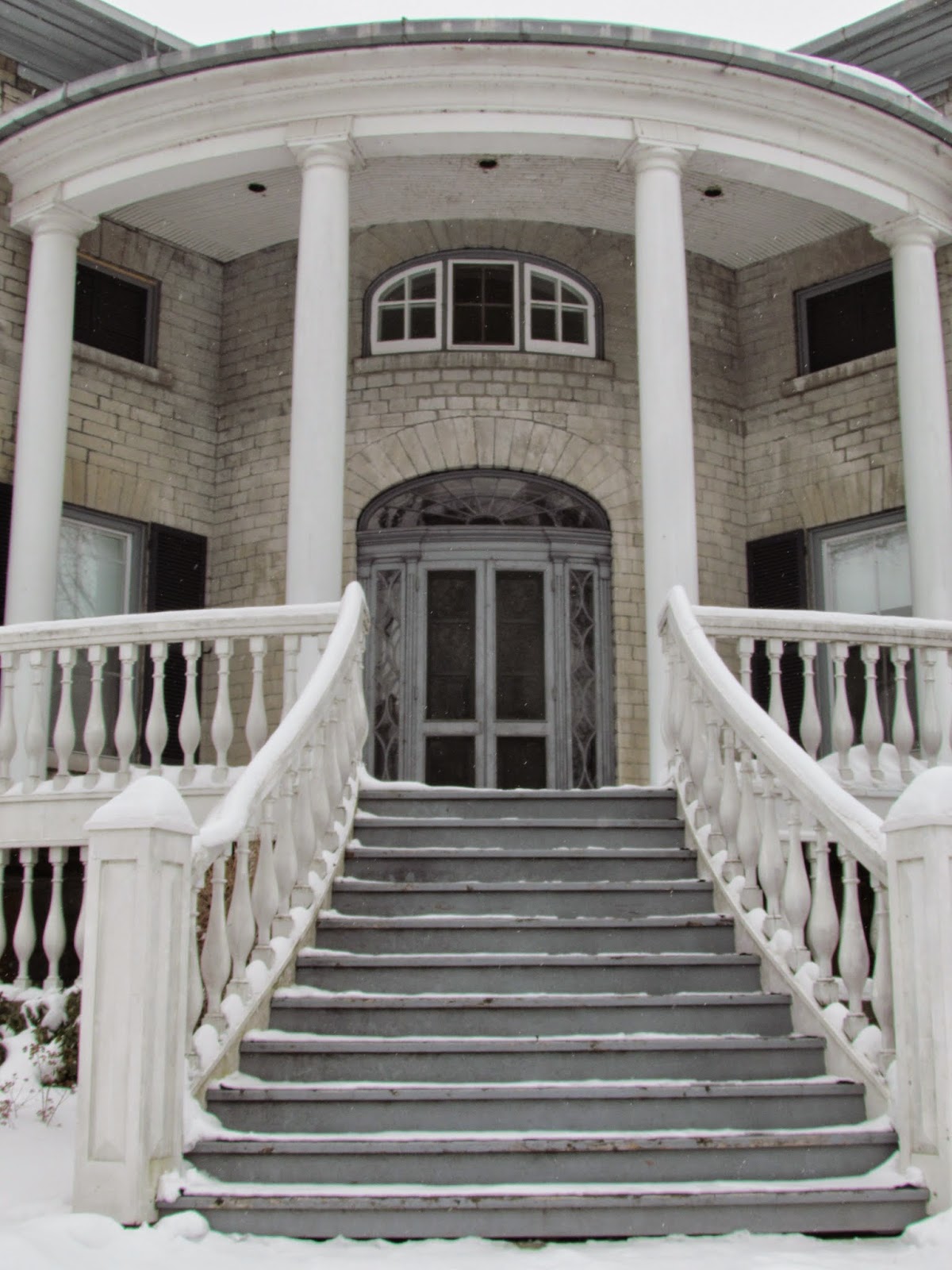 The province's first parliament met in the hospital facing Summerhill (another story); Stuart offered Summerhill as parliamentarians' lodgings, and retreated to his warm dry home in town. After that, government offices ('42-43) inhabited the building, then a school, and  finally Stuart managed to sell Summerhill to Queen's College for its first (and only) permanent  building, in 1853. 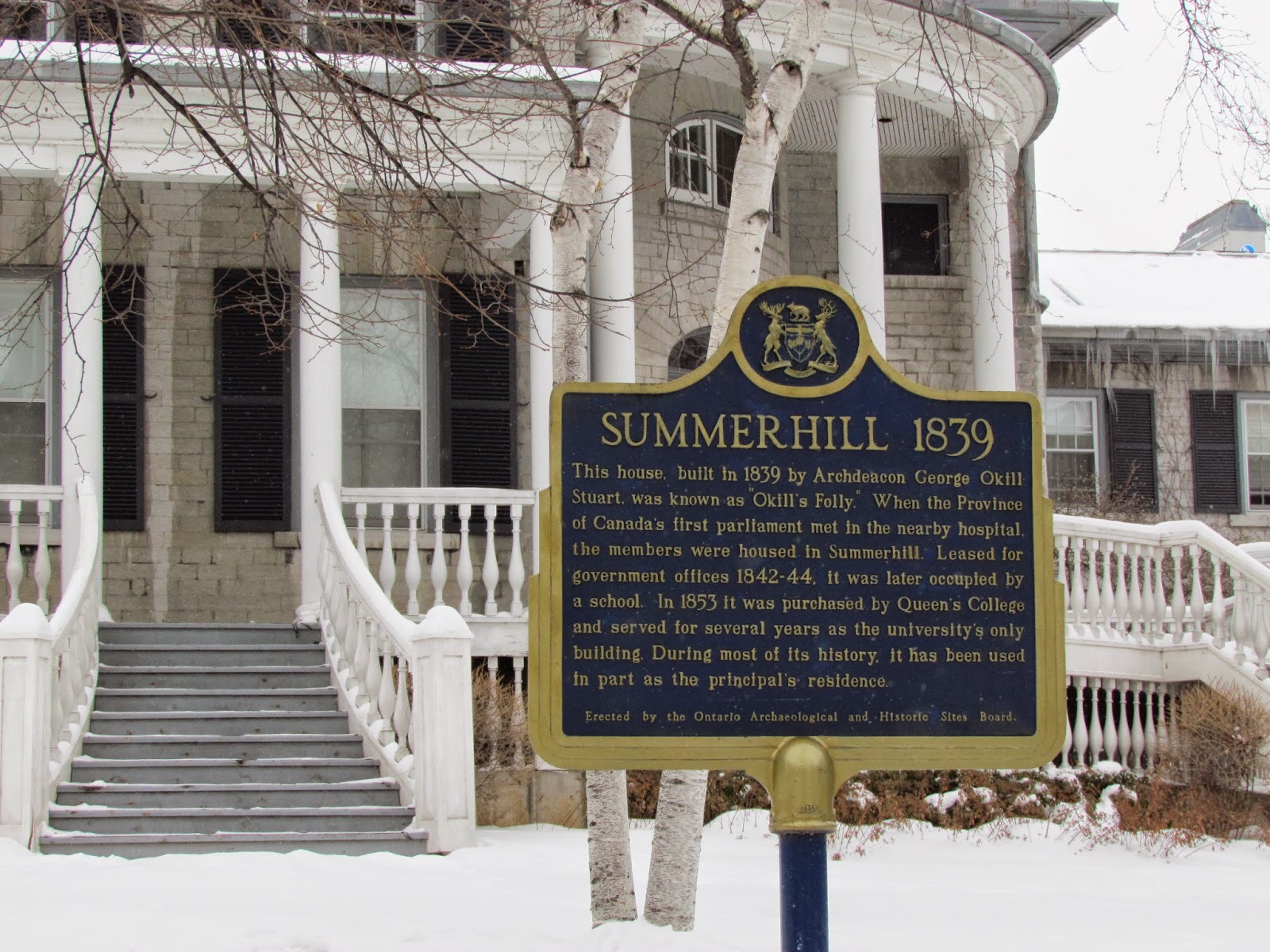 An 1868 photo, which I found in Vintage Kingston's outstanding Facebook albums shows the early wide roof parapet, and the flanking wings as pavilions joined to the central block via colonnaded corridors. This is very much the Palladian villa form/c.18 British country house style that  I have been studying of late. (Sadly, the photo, with the 1858 Old Medical Building to the left, has dropped off the blog, as has another dated 18870s, showing the 1867 wings.)
With our Past Before Us, by Jennifer McKendry, Kingston's other go-to architectural historian features the same photo, and confirms the British Palladian influences at play.

The photo also shows the formal gardens in front (an important part of any gentleman's country villa) and what looks like garden or even ungroomed area in the foreground. That would fit with some of the comments I read in the History chapter of the Queen's heritage study, which provides even more background, and reminds us that in the day, grand houses could stand cheek by jowl with undeveloped and unbeautiful squalor. I will explore Stuartsville, and some of its remaining structures in another post.
Thanks again to the amazing Vintage Kingston website for this hand-coloured 1908 view of Summerhill. Quarter-round one-storey porches have been added along the curving walls to either side of the front portico.


In 2010 the east wing of Summerhill was renamed Summerhill/Benidickson House to honour a former Chancellor. These days the Archdeacon's folly houses the Office of the Vice President of Advancement, the Department of Alumni Relations and Department of Development - which when I read closely, sounds like fund-raising. Millions of dollars of it. Things were simpler then, but money was always an issue at Summerhill.
Posted by Ancestral Roofs at 8:45 PM