The Problem with Palladio

Those blog visitors with more architectural background than I were likely laughing up their sleeves at my attempts to untangle several academic publications produced by the National Historic Parks and Sites Branch in the 1980's, in a December 2013 post.

Not being an academic (perhaps a disclaimer is warranted, for those visitors who might think I know what I'm talking about?) I have no idea how these monographs are viewed in the architectural history world.

I spent a good while over Nathalie Clerk's scholarly work Palladian Style in Canadian Architecture recently, and captured what I could in a post. So now I'm going to play around with some buildings that through design and function are Palladian in inspiration, although with later Neoclassical or other vernacular complications.

Perth Ontario has all the ingredients for a public architecture largely Palladian. Palladian style in Canada, Clerc explains,  is represented mostly in civic and religious architecture of the late c.18 and early c.19.

I was thinking about Perth's early days, back in July. Perth was settled under government direction (the Jurisdiction of the Quartermaster General's Department - feel like I should salute!) The first settlers were Scottish emigrants (stonemasons among them to be sure) who stayed in barracks in Brockville the winter of 1815-16, and discharged British soldiers. In March of 1816 a central supply depot was established, and by October the settlement had 1500 inhabitants - loyal to the crown and a buffer against hostile American incursion into the country(info courtesy of an OHT plaque downtown.) 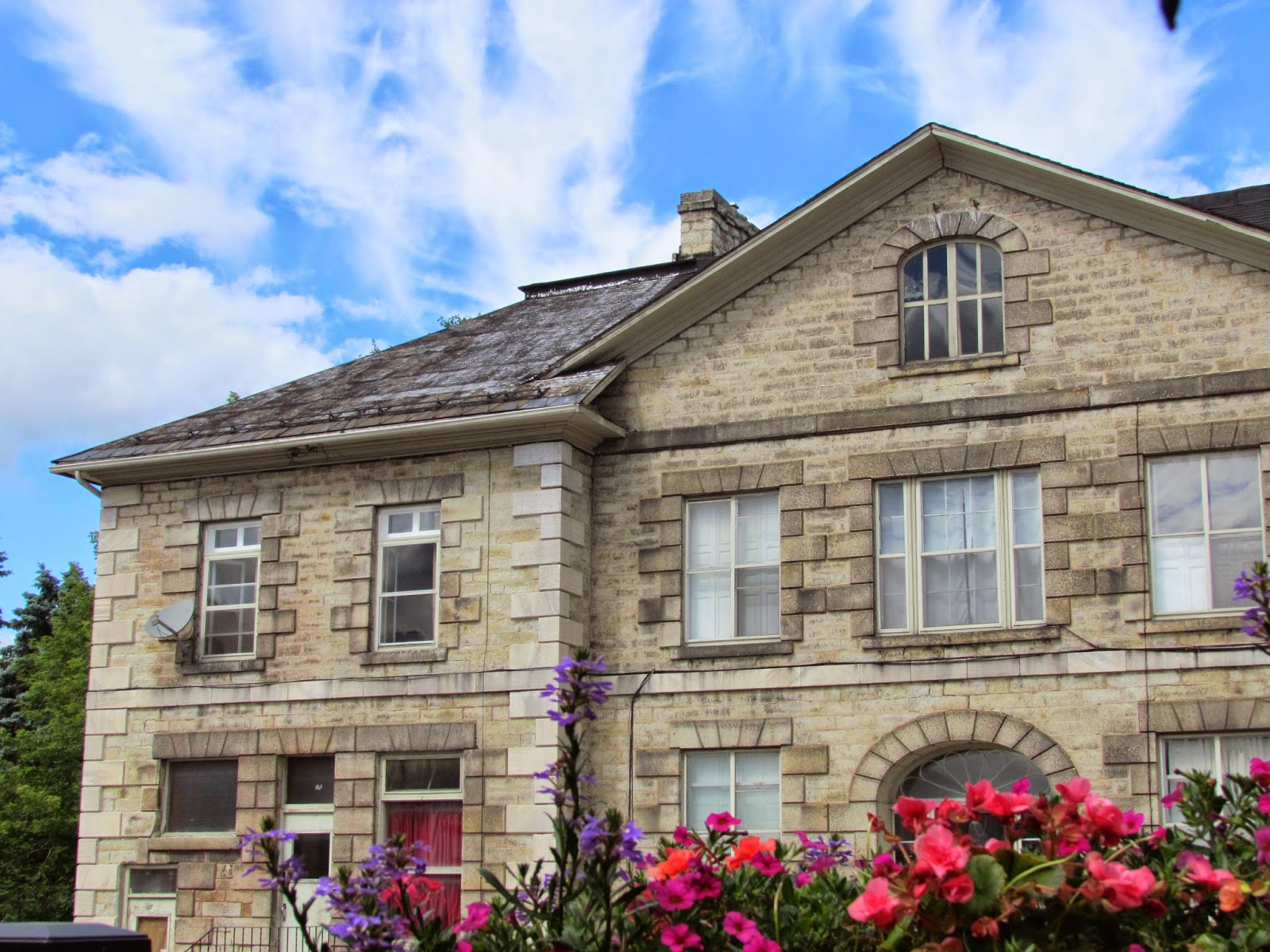 So, I muse. Architecture commisioned by British military establishment, built by skilful masons just arrived from Scotland - bound to be some Palladian influences in their civic buildings and the residences of important citizens.

So I offer these imposing structures for your enjoyment (well, mine anyway). The town hall started life without the Gibbs style cupola - so it cut an imposing no-nonsense figure with its projecting central section topped with a pediment.

Katherine Ashenberg (Going to Town,1996) points out "self-confident Scottish touches" in the James Allen building - the stonemasons' unique take on the centre frontispiece. Usually projecting, the centrepiece recedes in the 1840 building, leaving the side wings to project.

The prominent string courses, and forthright window surrounds and quoins - and the centre pediment (broken) with roundel all say Palladian, with a brogue.

And that's the last you'll hear about Palladian architecture from me. Unless of course, I might find the occasional 'Georgian' style house attractive. In which case, I can only quote from a real authority, John Blumenson . In Ontario Architecture (1990), he begins his chapter on Georgian style thus: "While Georgian refers to the sovereign rule of the Georges, in architectural terms Georgian generally refers to the continuation of the English Renaissance and Palladian Classicism as practised both in England and the colonies during the eighteenth century."

So it continues. The beat goes on.


Posted by Ancestral Roofs at 3:33 PM