I had a most pleasant day in a Kingston landmark with its own fair share of unpleasant memories, on a balmy day last September. I established the green and pleasant grounds of Canada's Penitentiary museum as my base, and wandered around on a purely architectural tour of the facility.

Denis and I had once toured the museum displays, and although the place is beautifully curated, I found Victorian 'reform theories' a bit disturbing. So this visit, I kept my eyes firmly directed toward the architectural features of the splendid location, the North Gate of the Penitentiary complex and the Warden's house, Cedarhedge, facing it across King Street - talk about two different worlds. 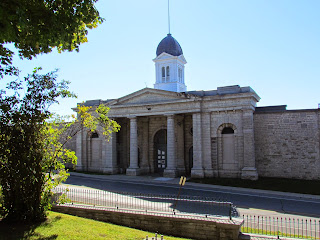 Jennifer McKendry, in her scholarly work With our Past Before Us (UofT Press 1995), writes at length about the Provincial Penitentiary, Canada's oldest reformatory institution. Several inherently contradictory theories ("security, salubrity and reformation") and the inevitable bureaucratic and financial complexities resulted in the facility (now a National Historic Site) being completed over a 35 year span, from 1834-1871, largely by inmate labour. 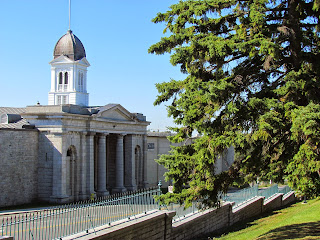 Despite its classically inspired style, it's a pretty grim place. Not by accident does the word penitentiary come from the same root as penitent!

There were tours of the recently closed prison in October and November 2013. Missed them. 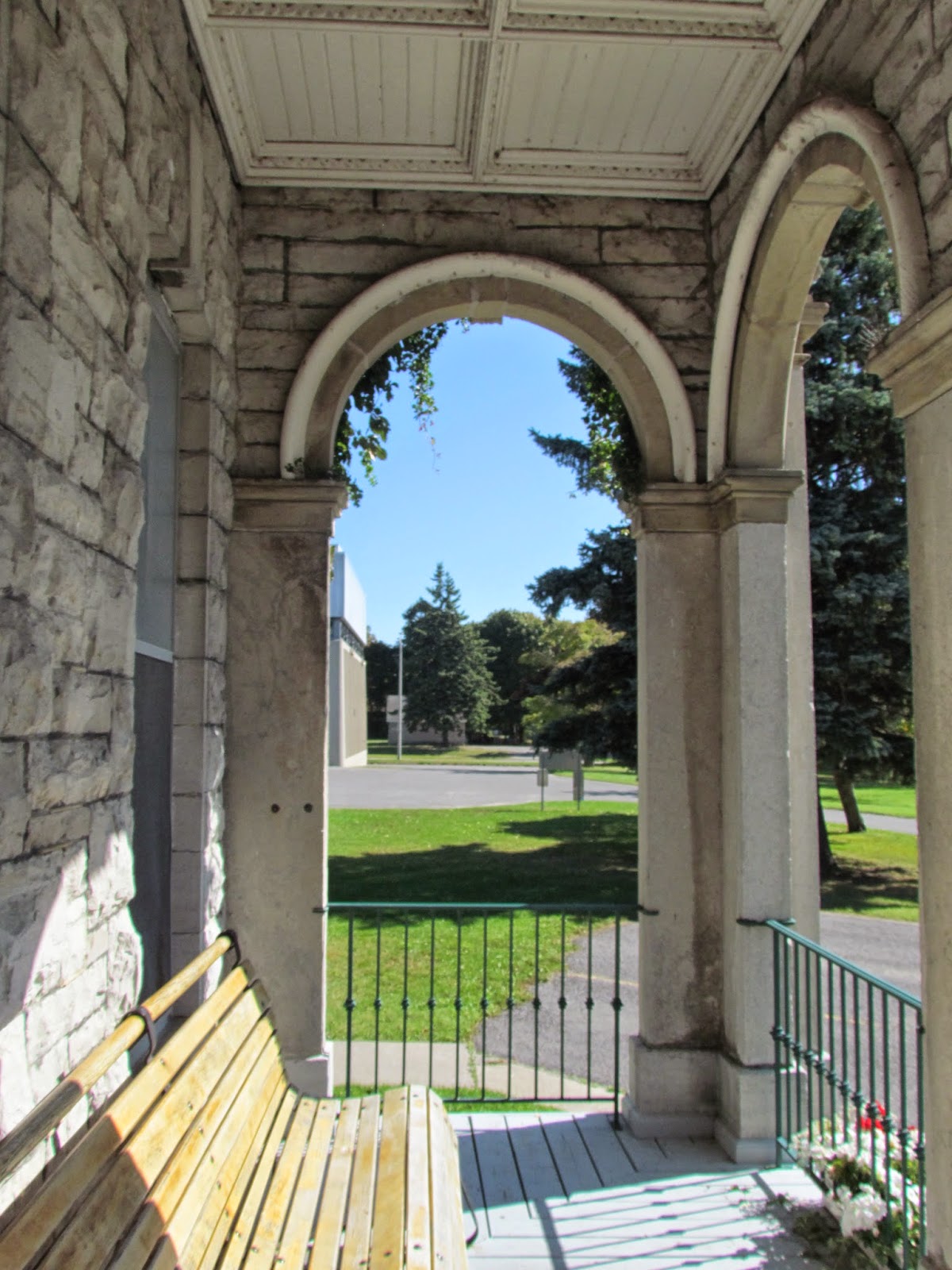 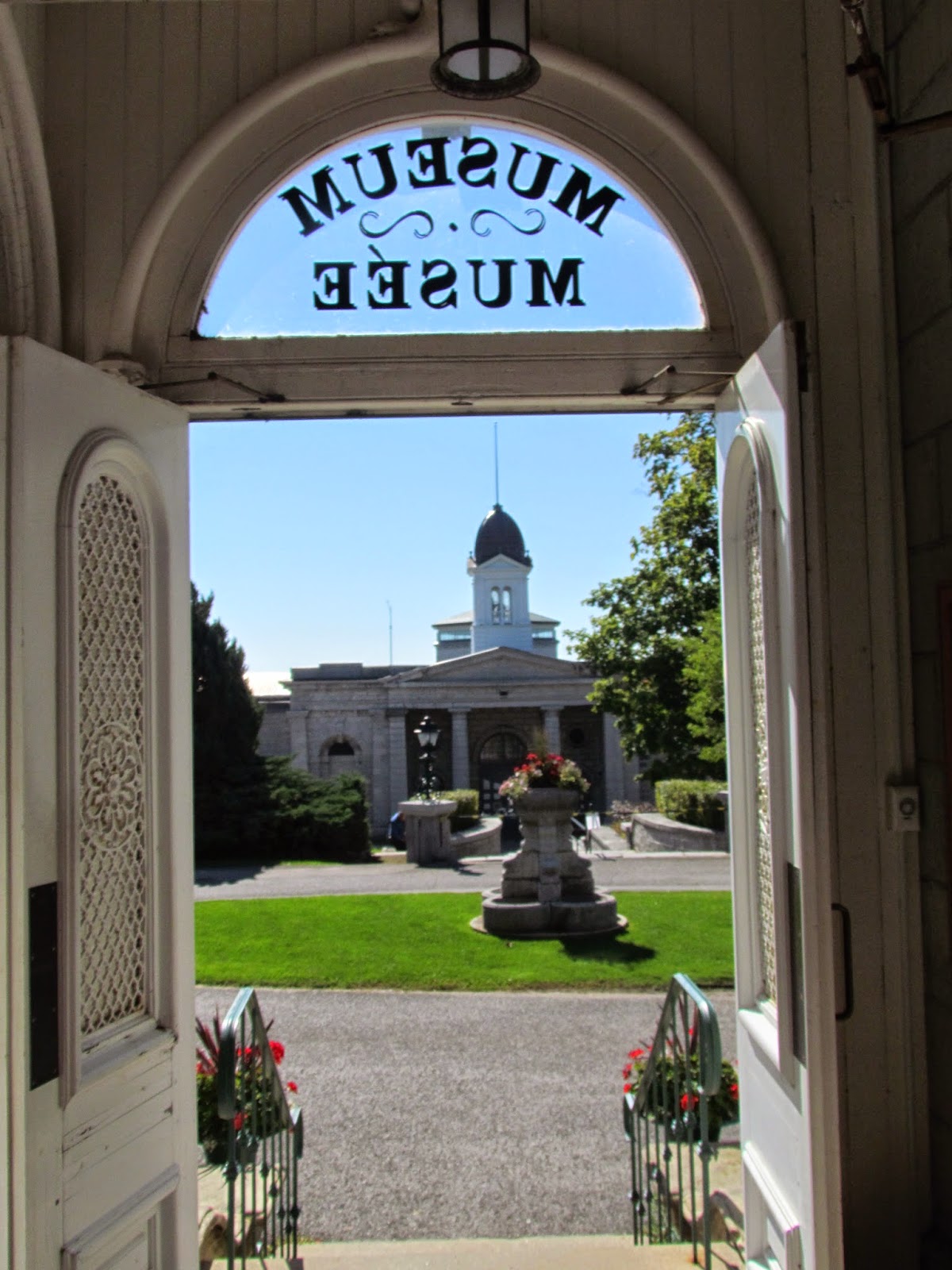 By 1873, the Warden and his family had moved from their apartment within the prison walls and were comfortably established at Cedarhedge across the road, an Italianate mansion built entirely by convict labour, of fine pale Kingston limestone with Ohio sandstone accents. The home was called Cedarhedge for the cedars lining the drive, its expansive terraced walled garden filled with orchards and vineyards, greenhouses and a conservatory, tended by prisoner-gardeners. 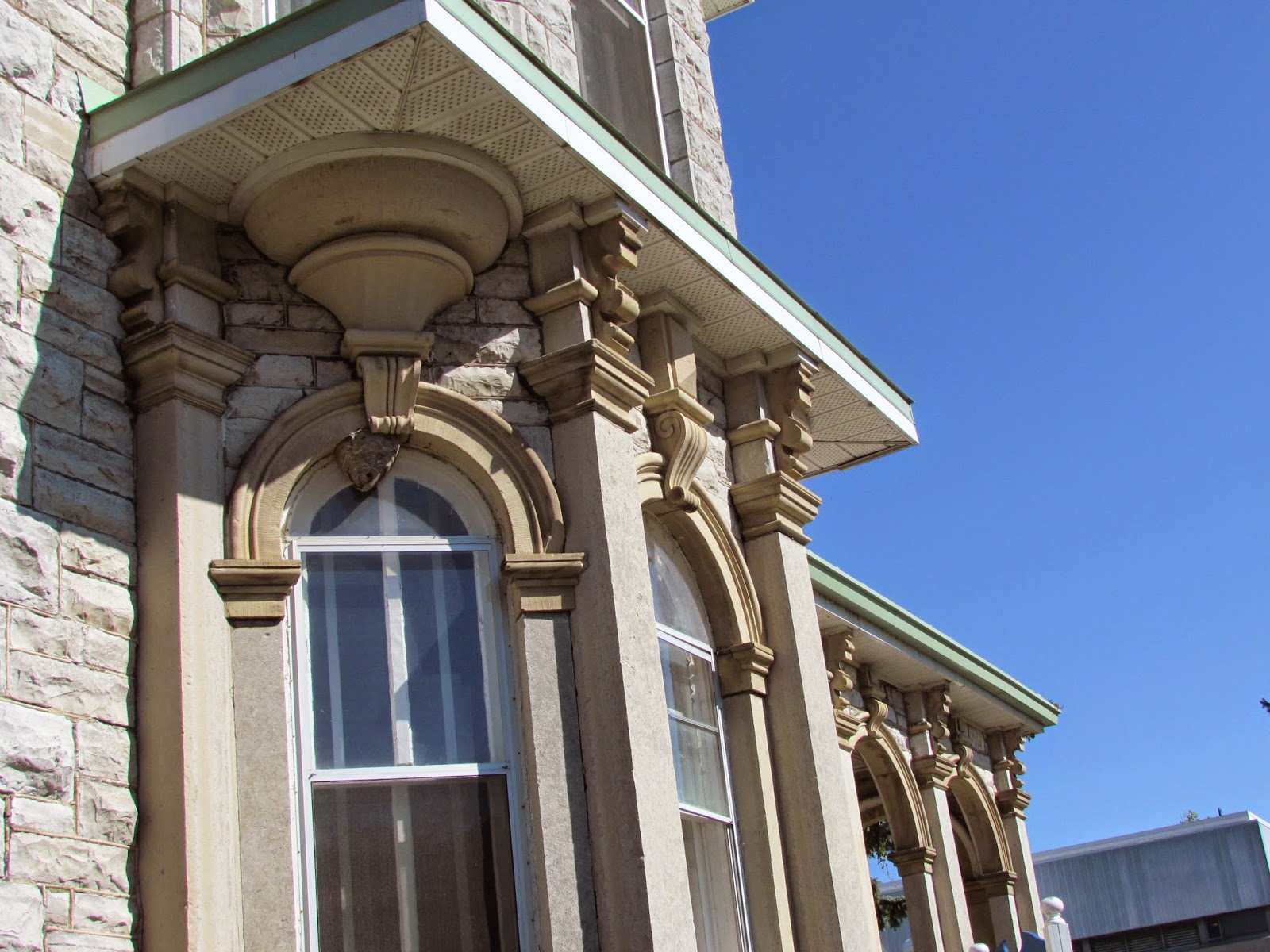 Cedarhedge now houses the museum; curator Dave St. Onge (tidying the porch in the photo above) was incredibly welcoming and informative, full of stories about prison and house, the fine exterior and interior details of Cedarhedge, the gardens (pointing out the photo angle toward the lake) - and the story of the decorative bench in the garden. 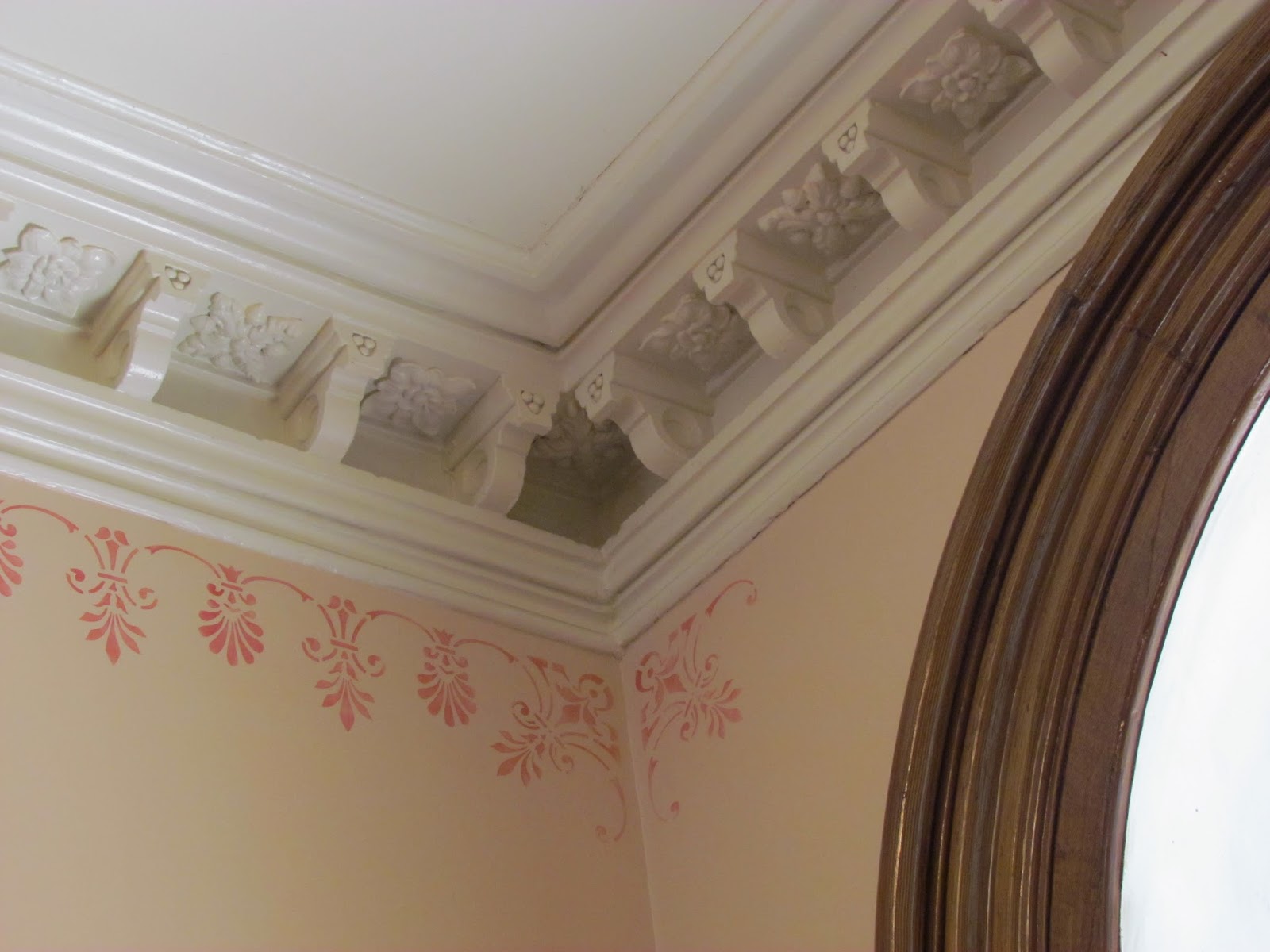 The woodwork in the house is particularly fine. One can imagine that the most talented prisoners would be inclined to produce detailed designs requiring loads of time, in order to beautify the house - and gain a few more hours outside the walls. 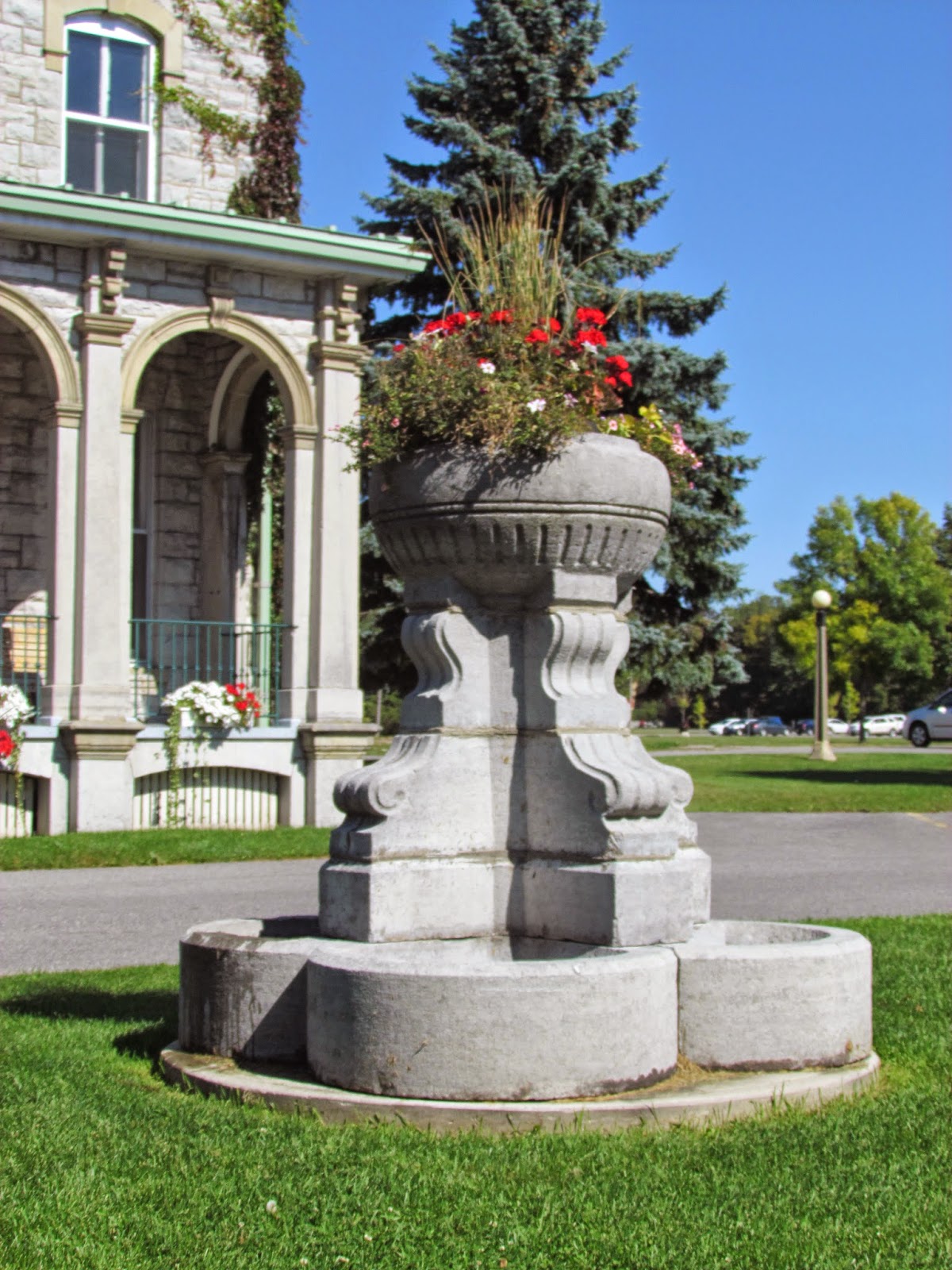 Plan a visit; they won't insist that you stay.

Posted by Ancestral Roofs at 12:40 PM