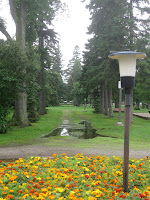 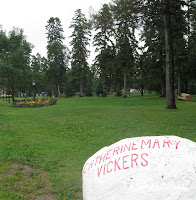 During our three weeks of August camping along the north shore of that most Superior of lakes, we had one day of drenching rain. Too wet to hike. Too wet to go to the beach. Too wet to kayak (really?). So we went to town. Thunder Bay was thundery and very rainy. For the morning, we settled into the most civilized Seattle Coffee House, fired up the computer, had lots of coffee and a great panini lunch, and sat out the worst of the rain. While LOML did business email, I browsed a number of great architectural walking tour guides. Sure the weather wasn't ideal, the misty foggy air not the least bit conducive to memorable photos, but as the waterstained, crinkly parchment feeling house tour brochures have just been reminding me, it was a grand adventure.
The first spot we visited was Vickers Park....such a large area of deep green conifers and bright Victorian flower beds catches the eye, when the neighbourhood itself is a bit down at the heels. I risked my life to run across a street of aggressive drivers, only to come upon a plaque that explains that the park which caught my attention had Belleville roots!
Vickers Park at the corner of Selkirk and Arthur Streets was created on property donated to the city in 1902 by Catherine Mary Vickers. Catherine was the daughter of author Susanna Moodie, who had escaped from a settler's life in "the bush" near Peterborough to the relative ease and sophistication of Belleville and lived to tell about it in Life in the Clearings, 1853. Daughter Catherine and husband John Joseph Vickers were some of the first settlers in the Fort William area in the late c.19, and became prominent citizens of their town, too.
(I just checked my photo files for an image of Susanna and Dunbar's house in Belleville, but I am remiss. Not a one.)
Posted by Ancestral Roofs at 10:44 PM 1 comment: 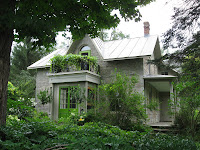 A photograph just flashed up on my screen-saver slide show...a lovely board and batten driveshed I snapped with my friend and neighbour Elaine, when we were prowling the back roads of Tamworth. Encouraged by a lovely email from a blog visitor, I share this photo and one or two others. 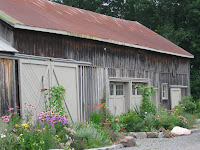 These images have in common the friendly marriage of soft old brick, sunbleached wood or warm stone with tangled kitchen gardens and abundant beds of homespun natives like coneflowers and black-eyed susans. These spots stop me in my tracks every time. Thanks gardeners, I know it hasn't been easy. 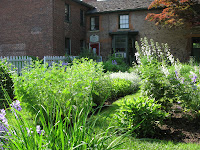 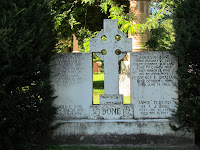 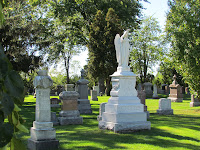 Doors Open Belleville today. What a great celebration of local heritage, and such a great opportunity to visit places seldom seen. On what other afternoon could I stand in the original attic of Belleville's 1872 Gothic Revival red brick City Hall, lean on the rough wood railing and float out into the building's massive wooden skeleton, revealed by an inspired renovation in 1988, then upward through the open space, through the sky-light to the top of the original clock tower? We should be proud of our city - somehow somebody discovered the idea of reworking the building's interior space, added another 10,000 square feet of working space - INSTEAD of tearing down a heritage structure to build a roomy box for city business! 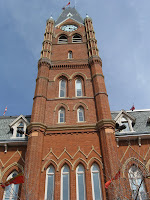 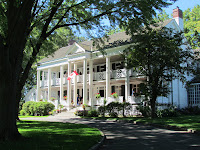 And that was just my 'break' from my Heritage Belleville duties in the building, engaging and networking with many visitors sharing my experience!

Later that afternoon, we got to wander the lawns of the exquisite Montrose Inn, a 1918 Colonial Revival mansion associated with one of the city's leading citizens in its day. It's now a luxury bed and breakfast, tea room, and the site of many memorable weddings. Innkeepers Wayne and Dianne Campbell opened their house for hundreds of visitors - us among them. Dianne was gracious as a queen as she toured us, and tempted us with a return. I look forward to high tea in the quarter-sawn oak panelled dining room - soon.

We ended a busy day in a peaceful spot, the Belleville Cemetery. Took some photos of evocative old monuments, and was pleased to find the resting place of many of the folk associated with our city's stately homes (including the builder of Montrose), and with our area's history, such as Susanna Moodie and her sheriff husband Dunbar (Susanna Moodie wrote Life in the Clearings here, after she exorcized the trauma of her years as a Peterborough area homesteader by writing Roughing it in the Bush). A former Prime Minister, Sir Mackenzie Bowell, much ignored in this his home town, rests under the shagbark hickories of the lovely site by the bay. Developed in 1872, one of the picturesque garden cemeteries which began with Paris' Pere Lachaise in early c19, the Belleville Cemetery is a wonder, and a place of repose for living and dead alike. Jennifer McKendry has a wonderful book on Cataraqui Cemetary, one of the best of the Victorian rural memorial parks - Weep Not For Me, 2000). A lovely place to spend an afternoon, or eternity.
Posted by Ancestral Roofs at 6:23 PM 2 comments: