As we leave the great hall of the ticket area in Union Station, and descend to the rumbling departures netherworld , the decor changes from classical to more Art Deco inspired. I suspect this has a great deal to do with the span of years during which this temple to travel was under construction.
The suitability of the streamlining imagery to the world of travel would have been irresistible by the 1920's.

This image conjures up the age of industrial iron and glass...reminiscent of loud and smoky, damp and draughty Victorian train stations. The picturesque handiwork of moisture on limestone walls and the elegantly sculptured vine moulding above the arched window with metal quatrefoil mullions compensates.

A last look back at the great hall's opulence underlines the difference in mood.

A vaguely Egyptian motif in a side hall off the ramp down to the departure level.  No other stylistic cousins in the place. I wonder what the story was here? A project for an apprentice?

Posted by Ancestral Roofs at 3:07 PM No comments:

Angels in the Details


The academic Beaux-arts architectural style taught at the Ecole des Beax-Arts in Paris influenced building in North America from 1860 to 1920.

Beaux-arts was nothing if not flashy. As if the guys (gals?) who learned their trade at the Ecole threw everything they'd ever learned at important civic buildings like banks (look for trade-mark cut-off corner entrances), train stations and post offices. And this at a time when Frank Lloyd Wright was trying to float some very different ideas!


Classical element this is. Classical purity this is not. Classical restraint. Hardly.


All that being said, gotta love what those Beaux-Arts folks did with Union Station.


The decorative elements seem to evolve from classically-based ingredients like columns and capitals, to more fluid carving and cast work in sections of the building. I haven't seen anything written about this, but I wonder if the long period over which the station was being built (it began in 1914, opened 13 years later) corresponded to changing styles - from Beaux-Arts to Art Nouveau to Art Deco (which I'll show in the final - I promise- post about my afternoon at Union Station).


Posted by Ancestral Roofs at 2:39 PM No comments:

Who knew? Who looked?

As I observed in an earlier post about the astonishing Union Station, most folks miss the best features of the place, in the stampede to catch a GO train. This place was built to impress. Works for me.

Opened in 1927 by visiting royalty, Edward, Prince of Wales, this structure was a long time a-building. It was  originally planned as the terminal for both the Grand Trunk and  Canadian Pacific railway companies (imagine all the planning deliberations going on in that pre-fax, pre-email, pre-con call era), but during the long wait, Grand Trunk went bankrupt (and Downton Abbey fans know what that meant) and CP carried on alone.


Union Station is the largest and most opulent train station ever built in Canada...a true temple to travel in the days  of porters, trunks, fine dining aboard with proper dress for dinner, and docile children.


The intrados of the massive barrel-vaulted windows is reminiscent of the awe-inspiring coffered dome ceiling of the Pantheon, and has the same effect...on me, anyway. The folks lining up to take photos in front of the (incongruous) 'Return of the Walking Dead' display...not so much. Or the splendid group in the wedding party, taking photos (truly).

I would love to be alone in this place - no muffled echoing squawks from the public address system, no crowds streaming by, no fast food aromas.

It was built in the Beaux Arts style, a style emerging from an architecture school in Paris called (not surprisingly) Ecole des Beaux Arts. The style is characterized by all the right classical elements (arches and barrel vaults, columns, capitals, dentil and egg and dart mouldings), but supersized. Not for the Beaux Arts designer the cool simplicity and restraint of Classical architecture, but a stylish mash-up of Renaissance, Baroque and Classical styles, writ large; monumental columns, colonnades, balustrades, and decorative elements. For the sports-minded, the Hockey Hall of Fame is a brilliant example (should anyone be looking).

And should you read and see more, check out Shannon Kyle's architecture site, Ontario Architecture.
Posted by Ancestral Roofs at 2:28 PM 2 comments:

Travel is so Broadening


Our grandma Pierce was very fond of Sinclair Lewis
short stories. I thought of her last week, when I had the opportunity to spend an hour in Union Station, paying attention, not to the people (fascinating) or the VIA schedule (on-time), but to the astounding architecture of the place. Architecture which, in the course of 10,000 travellers making their way through this space, gets the attention it deserves only rarely.


Our grandmother who always wanted to be a lady would have had few opportunities to leave the farm, with 4 little kids and no end of work to do...work which she must have felt was a bit beneath her. Her sister recalls Ola considering herself quite a lady, an unforgiveable affectation on a poor Prince Edward county farm around the turn of the last century.


Grandmother finally got her chance to travel. In the late 40's she visited Toronto, alone, to attend the wedding of her daughter, who had gone to the big city and made a good match. Grandma lived vicariously through her only girl-child. The daughter who gave her the chance to get to the city, just that once.

"They can say what they want to. Some people claim that reading books is the greatest cultural influence, and still others maintain that you can get the most in the quickest split-second time by listening to lectures but what I always say it, 'there is nothing more broadening than travel'".

From Travel is So Broadening in 'The Man Who Knew Coolidge', Sinclair Lewis (1928)

A Flash of Pretty Ankle 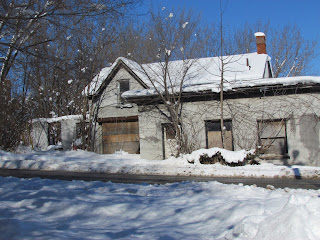 Recently I wrote about Picton's rowlock bond houses, and mentioned one that had caught my eye as I drove past down the 'town hill' paying careful attention to the tricky intersections at top and bottom. Despite my focus, I was distracted by a flash of something intriguing and beautiful, but meant to be covered. 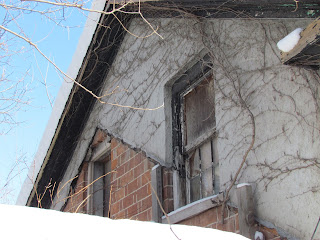 What I noticed was this bit of rowlock bond brickwork on the side elevation of a partly demolished house - it had been concealed by a peak-roofed wing, one of several add-ons over the years of looking for more space within, until man or the elements changed the building's north wall.

It might be a stretch to call this flirtatious, but for an old-house sleuth it does tantalize -  and invite further inspection. 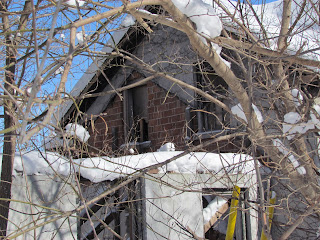 In my ankle-high boots I braved the calf-deep snowplow wake and the heavily drifted lawn of deep snow covering...what? Not weak old boards covering deep pits, or rusty nails, I hoped, as I peered inside the openings. 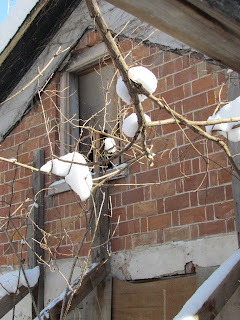 I remember this building at the corner of Mortimer Street, from my childhood. I seem to recall that the southern addition's neatly squared off corner entrance led to a plumbing supply store. Could it once have been a corner grocery, when this hill beside the harbour was lined with working folks' rooming houses? Its heavy cornice, woodframed windows and a banded brick chimney on the main house suggest its age - how I'd love to know its long story. 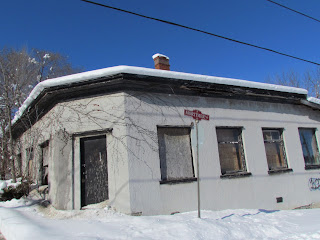 Today the building marks the entrance to a spiffy waterside condo complex, and scarcely gets a glance as residents zoom down Mortimer Street to their parking spot and home. I wonder if we'll even wonder 'what used to stand here' when it is, inevitably, demolished. Or will Picton's pride in its rowlock dwellings give it a chance?
Posted by Ancestral Roofs at 5:32 PM 1 comment: 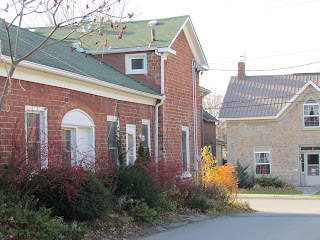 My camera and I really must get to the old town one day soon, when the sun is out and the temperature bearable. Last time I looked, there was a plain little house on the town hill, with some cladding torn off, prior to what I expected was demolition - for there be condos. But work appeared stalled...perhaps it was a nasty surprise for a developer or a delight for an old house nut, for peering out from beneath the siding was what appeared, to a distracted driver heading downhill rapidly, to be rowlock bond.
Posted by Ancestral Roofs at 10:07 AM 1 comment: