The eye is the mirror of the soul, so it's said.
So too, do windows offer a look into the souls of our buildings.


I am particularly sorry to see blank plate glass retrofits, like empty stares, in the walls of warm old stone houses. Then there are the fake sash windows, imitation mullions buried between thermal panes like those odious aspic salads popular in my gran's day.


All the historic restoration folk say it. Windows are critical.

Look at these beauties.


Overlook the tendency to overlook maintenance on these problematic bits of old houses. See the beauty behind peeling paint and chipped caulking. 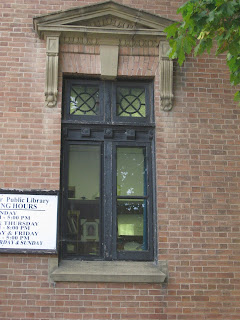 It occurs to me that it might be advisable to overlook my tendency to tilt photos, too. 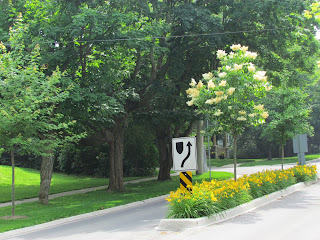 I recall an earlier visit to Port Hope, falling under the spell of this1822 seaman's hotel on King Street at the waterfront, the very building channelled by Jane Urquhart in her evocative work (and my favourite novel ever) 'Away'. Quite the different neighbourhood. Quite a different time. Wish I could find the post!
Posted by Ancestral Roofs at 4:52 PM No comments:

This summer long past, when I camped at Charleston Lake Provincial Park, I escaped on several road trips in my little air-conditioned car to avoid the stifling heat...and to commune with the historic buildings of Leeds and The Thousand Islands, and the people who love and preserve them.

This little enclave at a country crossroad lured us in to the most enlightening and welcoming places and people one could hope to find. 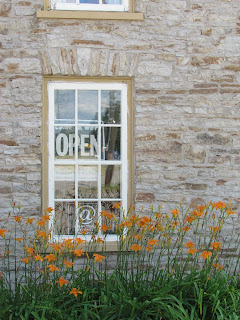 This Georgian stone structure hints at the 1830's, but was in fact built in 1871 as a road house and hostelry to support events at the brick structure beside it. Today it houses a bright and efficient  library, and  historical displays on the second floor which we regret not having had the time to visit, it being 3 PM and us on our way to Brockville for lunch.


And the fine folks who welcomed us, and made us want to stay longer and to return many times? Librarian Nancy, who found just what I was looking for, a walking tour of nearby Lyn (more on Lyn later.)

The pleasant fellow who arrived during our conversation was Pierre Mercier the archivist, who supplied us with handfuls of historic walking tours, showed us around their archival photo digitization project and genealogical resources, and just made us feel most welcome...in the well airconditioned LTI archives.


Fort McLeod Alberta provided an opportunity to reflect on the role that Chinese immigrants played in the formation of British Columbia.

This weathered false fronted frame building is one of the last vestiges of the years before 1900 when the town had a number of Chinese restaurants and laundries. It's so very plain, and in poor condition but it has such a quiet dignity about it. Kind of like the life which was lived out  here, possibly a lone man without a wife and family to give support and meaning, segregated by ignorance and convention into his own small part of a tiny frontier town, so far from his homeland and his culture.

Posted by Ancestral Roofs at 5:04 PM No comments: 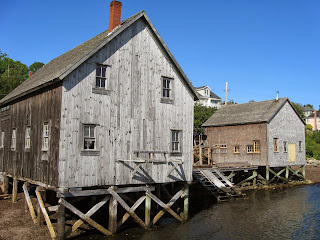 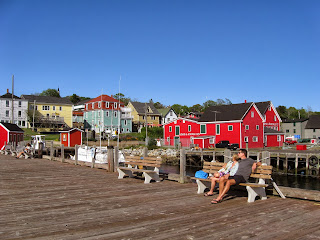 Posted by Ancestral Roofs at 4:45 PM No comments:

Despite the slight tendency to conjure up Hollywood back lots with their sets for Main Street movie showdowns in old western towns, these false fronts are real.

More commonly called "boomtown fronts", buildings of this particular style are common in the west, and are usually associated with the first stage of civic development between the 1870's and 1915.


The effect of placing a higher more decorated front against the plain gable end of a commercial building emulates larger more sophisticated commercial centres, and gives a bit of dignity and beauty to plain wind-scoured lumber.


The message is stability and prosperity, with the added advantage of providing space for extravagant signage touting one's wares. All of these fine examples are from Fort McLeod, Alberta, a small town which early on realized the value of its early c.20 architecture, and created an outstanding walking tour, complete with all the interpretive signage an old house nut could wish.

This is all in addition to the town's major draw, the replica Fort McLeod museum, headquarters of the North West Mounted Police after their arrival in the lawless west in 1874. A great little town, Fort McLeod.
Posted by Ancestral Roofs at 4:21 PM No comments:

Letting Go...or Home is Where the Heart Is

Not long ago, I noticed a for sale announcement in a local magazine. The property in question was the family farm. For sale again, the most recent shift in a series of changes of ownership since our dad reluctantly sold the five-generation farm in 1970.

It made me think of a delightful man I recently interviewed, two days before the sale of his farm, a rare 1830's Scottish stone mill and adjacent house. Allan was  letting go of his beloved Fogorig, to younger folk who can carry the restoration vision further.

It's what our Mom and Dad did, after that first sale. In subsequent decades they bought, improved or built, and sold, a number of homes and gardens - always ensuring there would be trees and  yard work for Dad. The homes became smaller and easier to care for, then eventually home became an apartment (granted even then Dad quickly became the resident custodian and yardman.)


Recently, I had a few hours on a sunny day in Picton, while I waiting for a dear friend having a medical procedure. Had a visit round to all the homes.

Today I'm thinking of all the Thanksgivings we spent together in each of them. The size, the heritage value, the neighbourhood - nothing mattered but that they were home. And we were together making memories, keeping family.