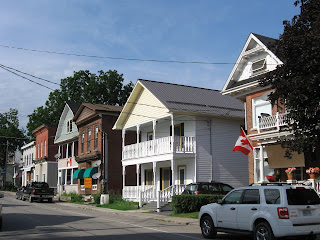 We're just back from a week of camping at Charleston Lake Provincial Park; had occasion to go to town a few times. "Town" in that part of the world is Lansdowne, about 10 km from the park. Their historic fair was in full swing as we drove through on our way north to the park. Tempted? Frankly no, but it seems everyone else was. Lansdowne has a great little supermarket, friendly post office staff, reliable free Wi-Fi in the library parking lot (important when one is tracking some important family news) and some really interesting architecture.
Now, I missed one of the best parts of the town. Came about 20 years too late. I chatted with a dear elderly couple sitting on their porch where the sidewalk ends. Pop waved at passersby, Ma counted the train cars on the nearby CP line down the street ("150 cars on that last one!" she announced with pride.)
Pop recalled with sorrow the removal of the rows of mature shade trees which once lined the street, County road 3 heading up the hill to the town's confusing main intersection (now I know how newcomers to Picton's famed 'town hill' feel)  Road widening. Progress. For travellers like us. Felt complicit in the tragedy. 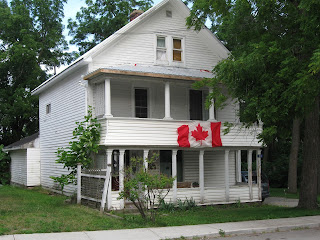 The most intriguing feature of the town is its porches. Not the welcoming 'come on up and set a spell' front verandah kind. Lansdown has those, but it also has a proliferation of second storey porches; they appear on residential and commercial buildings, adapted to Edwardian or ordinary front gable buildings.


Can't quite figure out their origin; they really give the village a unique character. Would I be correct in thinking French influence? Checked online and came across this page on Shannon Kyle's Ontario Architecture site. Remain convinced the Ottawa River French influence trickled down to the area; with a lot of help from vernacular builders over time. 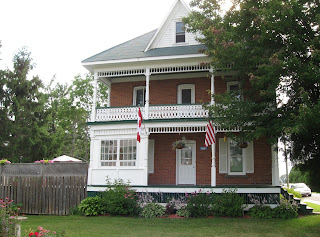 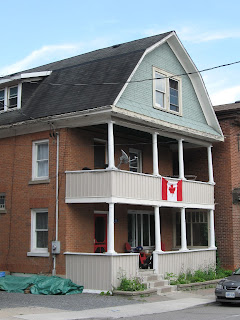 A few bits of Lansdowne history exist online: it started along highway 2, but picked up its buildings and moved a mile north when the Grand Trunk Railway came through in 1856. There is a walking tour online (good on ya, folks.) 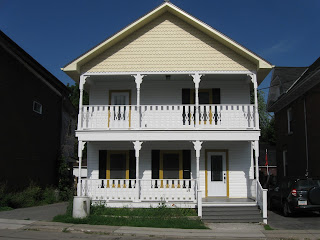 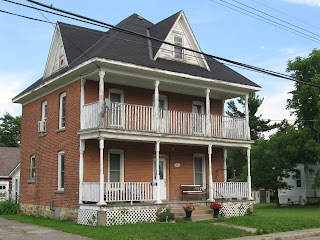 One thing I know for sure. Most of these buildings are over 90 years old, because Pop is
90-something and he can personally vouch for them.


Posted by Ancestral Roofs at 2:58 PM No comments: 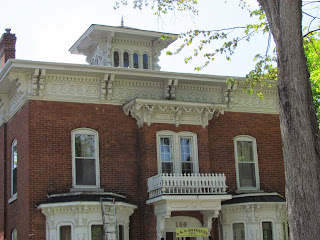 Seems to me that Napanee must have had a house builder who specialized in decorative cornice friezes (or several copycat tradesmen.) I have often noticed these rich friezes, looking for all the world like iced confections,  on some of the town's wonderful Italianate homes. 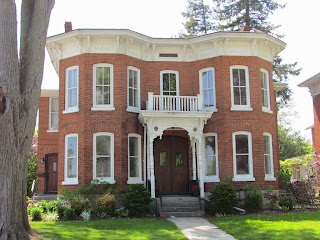 Dropped friezes - wide bands below the roof cornice, lend these lofty houses an elegance that very few features can, panelled and ornamented to within an inch of their well beyond functional lives (their function being to support the roof brackets.) 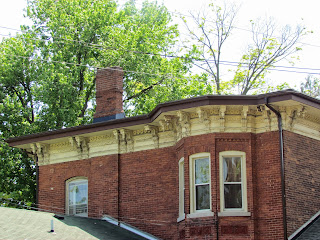 Until this past spring, however, my admiration has been tempered by the need to keep the car from wandering onto someone's manicured lawn, or drifting through that tricky three way stop at Belleville Road and Bridge Street. 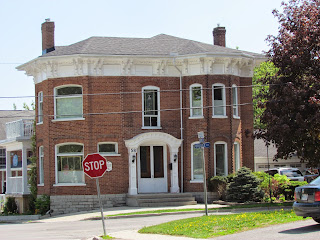 Finally I got a close look. Because May's installment of  ACO Quinte's entertaining and informative (and fiendishly difficult) architectural scavenger hunts, this one put together by Evelyn and Doug Sloane. The target? Napanee, a leafy and very interesting neighbourhood along Adelphi, Thomas, East and John Streets. 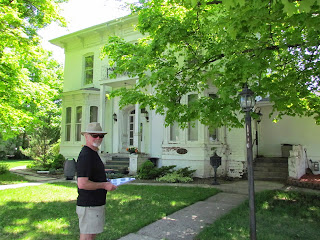 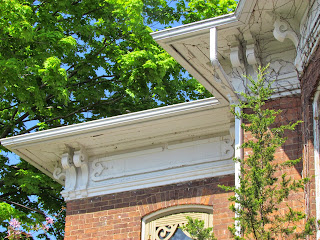 And although many of these cornice details were not on the scavenger hunt list of 36, for which my dear one was on a quest, I did manage to shoot a number of these very elaborate wide friezes. And what an astonishing array to select from, every way I turned.  Stokes and Cruickshank draw attention to a few details about the sheer Victorian excess of cornice friezes, in the glossary of The Settler's Dream.


Frieze decoration began with classical details, as one would expect, and blossomed into the large elaborate, paired brackets of the Italianate, with their acorn drops suggesting dripping icing just waiting for an impulsive child with itchy fingers. 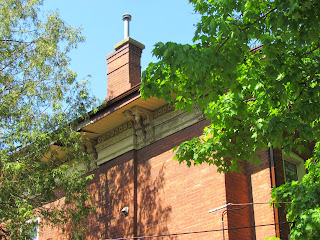 Some of the photos illustrate the sorts of decoration which fills the vertical face of the cornice - applied detailing, panels outlined in moulding, the occasional example festooned with seasons of spiders' handiwork. 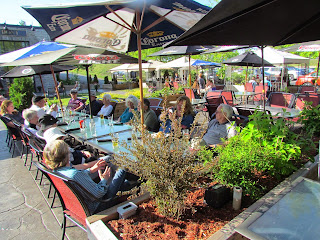 I was still spotting them as we followed the group down to the estimable Waterfront Pub along the river to cap off a terrific day. 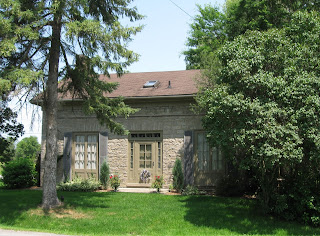 I ventured into Foxboro the other day, on the hunt for a house which still eludes me. For now. 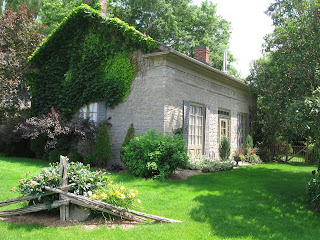 But I did not leave the area empty handed, for I had the time to capture a tiny perfect stone house which I have long admired.


Someone at the Archives knows the story of this house and its owner. When she's back in the fall, I shall ask her to retell it. 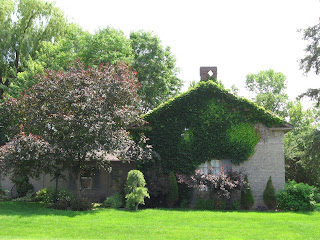 For the moment, all I can tell you is that it has the most perfectly fitting address. This beautifully kept, vine-swaddled early house is on Harmony Road. 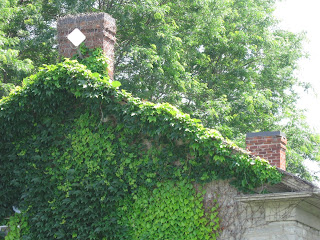 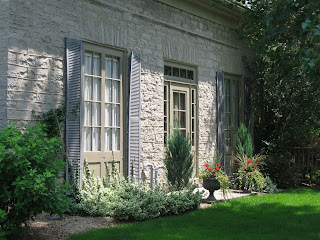 Posted by Ancestral Roofs at 12:40 PM No comments:

Silhouettes in the Shade 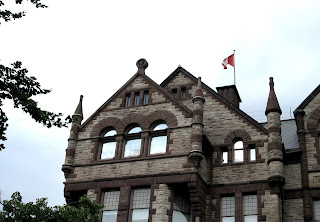 "Surely a trip to Toronto would have inspired a few posts," hinted regular reader Brenda.
And she's right. A fabulous day in a fabulous city, and not a lot to show for it. As it were.

Perhaps the spat-grey skies inspired a bit less that my usual enthusiasm for the photos I brought home. Perhaps, thanks to my informed and delightful companion, I was more inclined to listen and look, than to take photos. That's best done solo, in my experience. 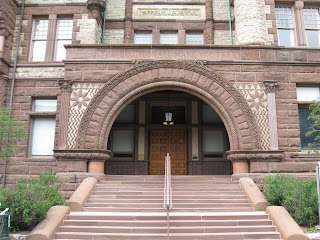 But on closer examination of some of my files, I have discovered a pattern - shaped gables abound in the older buildings of the University of Toronto, Victoria College.

This polychromatic Victorian pile with heavily Romanesque doorway (abandon hope all ye who enter here is hardly the effect they were going for, I would think), and Medieval turrets is worth a closer look.

I am especially fond of the grotesque kitty perched in the spandrel of the weighty arch. 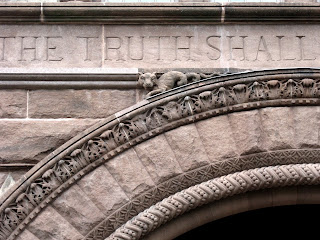 Whether silhouetted against a pearl grey sky, or superimposed over the startling contrast of a modern structure, the shaped and ornamented gables show their best profile to anyone who cares to look. Up. 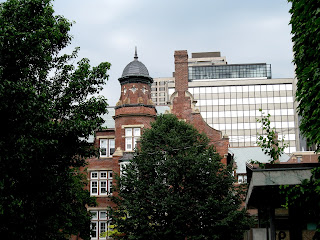 Another toothsome treat is Annesley Hall, built in 1902/3 as a residence for women students, a role it still plays at Victoria College.

Lots of historical detail, typical of institutional buildings in the Queen Anne Revival style. Love the Flemish shaped gables, and banks of Tudor style windows, asymmetrical roofline, combination of stone and brick, quaint details like the turret with its dome, the chimney rising from the gable, all creating a homey feeling for this home away from home. 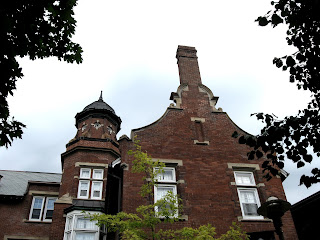 According to the NHS plaque inside the fence, "this domestic grandeur was believed proper for young women students in the early twentieth century," Well, we got our feet in the door of higher education at Vic, and what a door that was. 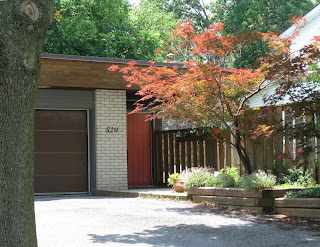 Yesterday I finally got a chance to photograph this house a scant 5 blocks away. Always something, isn't there? Blowing snow. Minus 27. Rain.Too busyness. Garage door open. Something.

This time I was lucky.The place is for sale, so they are looking their best. Not hard to look good, when you're 529 Victoria. I have loved this house since I moved to the neighbourhood.

It reminds me of the wonderful west coast modernist houses that I've been seeing since the 60s - the kind of house that would have been the perfect location for a film about mid-century urban sophisticates. The in-crowd. The kind you'd see in Sunset magazine (begun 1898!), exemplifying sophisticated yet earthy west coast design. 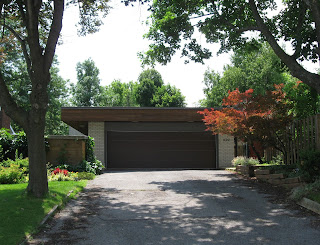 I love this link that celebrates the essence of the magazine, that voice of sunny west coast living, that seemed so far removed from a snowy Ontario farmhouse. Sunset magazine published loads of how-to special publications that you can still find at home reno stores or yard sales - how to build deck seating, garden gazebos, fences and the like.

I remember the Blue Barn Gallery in Ottawa, mid 60s, where a date who knew me better than I knew myself took me to an art and design exhibition; it seems to me that I was awakened to modernist design from that time. Now the newest and best clean-lined and functional furniture of the era is "vintage" as this collecting primer article from the Globe and Mail would suggest. 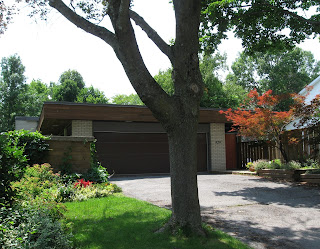 A virtual tour of the featured home suggests that it is crying for a new owner who knows his Eames from his earlobe. This sublime modernist house needs modern art, and plenty of sleek Danish teak and sculptural fibreglass created with Herman Miller integrity.

Some online sleuthing led to discovery of some shopping opportunities for the new owner:
Studio Pazo  or  IFN Modern Furniture for those all-important shell chairs . I also enjoyed this article about  J. & J. Brook, those pioneering modern furniture and design merchants in Toronto,
Posted by Ancestral Roofs at 12:49 PM 1 comment: