Dave Bull of the Frontenac Heritage Foundation recently sent a photo of the Gananoque Town Hall. He commented on the resemblance of this building he knows well to the photo of the Picton structure which I included with some house portraits in  my most recent post .

The Gananoque Town Hall was built about 1832 for John McDonald a wealthy local merchant, postmaster, landowner, and later member of the Legislative Council of Canada. The wonderful building in its impressive park near the river was deeded to the town in 1911.
The building to the right, in Picton, is the c.1835 home of the prominent Washburn family. Its parapet gable end walls ending in massive chimneys so closely resemble the McDonald house as to momentarily confuse even the most astute observer of heritage architecture.


Why the resemblance? When you think about it, how many architectural elements did they have to work with, really? (No Queen Anne variety or Second Empire pomposity to select from yet).

Both display the standard five-bay front of the Georgian tradition. Parapet end walls were designed to prevent fires spreading in urban areas...granted, most effective where buildings abutted each other.


The details of each building distinguish between them. Each draws on different architectural vocabulary for the finishing touches. The Gananoque home displays the refinements of neo-classical styling - more generous fenestration including an elegant Venetian window above the central doorcase, an elegant elliptical fanlight above the front door, a general lightness of touch which distinguishes it from its Georgian roots.

The Washburn house shows Greek Revival influence in the modillion-trimmed cornice and porch which are decorated in the Greek key design (not visible in these photos, unfortunately).

Both houses have crisp splayed stone lintels, and are built from early soft clay brick - one wonders how far afield from the building site those were formed and baked. I love the stone corbels supporting the parapet wall - a distinctive old house feature becoming quite  rare.

(Thanks to the Ontario Heritage plaque in Gananoque, and The Settler's Dream for the details.)
Posted by Ancestral Roofs at 12:11 PM No comments:


What a treasure we have in our carefully preserved built heritage.

For some time, I have been wanting to post a 'photo album' of some favourite places - beauty and history and family saga contained in homes in Prince Edward County, Belleville, Kingston. I could have selected a hundred more that bring me the same joy.


Today, a reason much more important than self-indulgence prompts me to share some photos.


Today I heard from Dave Bull at Frontenac Heritage Foundation about an important survey being conducted by graduate students at the Heritage Conservation Program - and aren't we glad to hear news of this program? - at Carleton University (one of my alma mater)


The students are collecting information (via an anonymous online survey) from owners of heritage properties about insurance coverage trends. We all know that insurance issues can be an impediment to decision-making around heritage designation. The findings from this survey may yield research that provides clarity and reassurance around the matter.


Here's a link to the survey. 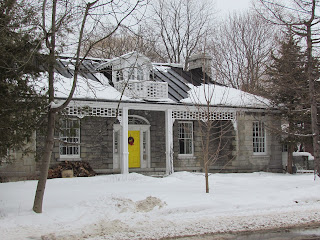 Enjoy these lovely homes - and your own. And don't forget to spread the word about the survey!


I will come back later and identify these beautiful buildings. Perhaps you know many of them already - or own one? And if you do, thank you for letting me take your photo on my travels.

Like a hearty wave from a neighbour on the highway (because in the country one does not pass another human, known or unknown, without acknowledging her presence, how rude would that be?) I read my friend Katherine's blogpost tonight about the saving grace of small communities, especially those with whom one had early acquaintance.

By way of returning the wave, here are some views of the village to calm the city heart, and make looking forward to the weekend that little bit sweeter.

I only wish that the photos, like the village, looked a bit more like spring. A bit of forsythia, would it be too much to ask?


Happy almost weekend at the Manse, folks - and everywhere, everyone.
Posted by Ancestral Roofs at 8:54 PM 2 comments:

Much is being written about the Federal Government's abandonment of its lighthouses.
A visit to Point Traverse lighthouse today underlined for me just how perilous their situation is.
As perilous as this stretch of Lake Ontario between False Ducks, Main Ducks and Timber Island once was.

It's difficult to believe that anyone cares. Won't be long before the lighthouse is deemed a hazard, and the litigious among us will see demolition as the only sensible recourse. Won't know what we've lost til it's gone.

Spent the day with a fellow scribbler at Point Traverse, Prince Edward County. The mission was to capture images of the remaining commercial fishing premises on the point, in face of the federal government's stated intention to demolish this little bit of history - and local commerce. The Environment Canada, Canadian Wildlife Service bulletin screwed to the side of a weathered little red steel-sided building reads:


"Please take notice that this structure is now the property of the Crown and will be demolished on or about March 4".

Uh-oh. Today's March 7. No sun, but let's not wait. Next week we may have sun, and no buildings.


The local newspaper ran a story about the place on Monday. Four generations of local folk have fished the lake out of this harbour.

I remember going there as a kid, with our dad, being surprised to learn that people farmed the lake just like we farmed the soil.

But the fishermen's lease is to be terminated, and the buildings and a way of life will be demolished in an eye-blink.
The Intelligencer outlines the story, and the involvement with a local federal politician in defense of the way of life. For 200 years, fishing families have called this inlet off Lake Ontario their home harbour. Despite this, the owners are informed that their homes are "temporary buildings [and that] sheds and/or equipment remaining on this lot are now the property of the Lessor and will be demolished and removed..." Hard words, no matter whose side you're on.
The point's other resident is the Prince Edward Point National Wildlife Area. I suppose the government intends to take what belongs to it, and return it to the birds.

Look for an article by John Martinello about the Point Traverse commercial fishery in an upcoming issue of County and Quinte Living magazine.

Posted by Ancestral Roofs at 8:54 PM No comments: