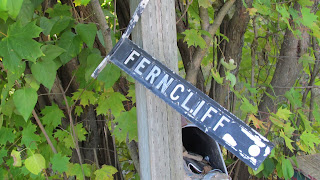 I spent a few days in Gananoque this month. The village was a favourite of ours, and I resolved some months ago to find a spot to stay and spend our 42nd wedding anniversary doing the things that pleased us: lunch and a beverage at the Stonewater pub, a wander through some old neighbourhoods admiring the architecture, a visit to the  1000 Islands Historical Museum to enjoy their fine indigenous culture exhibit, and the social history of Thousand Islands summers in the days of the 'big houses.' There we would marvel at the astonishing ship models built by William Morrison, a venerable gentlman of our acquaintance (3 to 4 thousand hours each ship!) And of course, there's the river and the islands -  by urban footpath, bayside hikes, by tourboat with visiting English family (years ago), and from one of the many town benches - watching the river run.

A line from that Loggins and Messina tune, slightly out of context, describes the interplay of river and loss: "And it goes on and on, watching the river run, further and further from things that we've done, leaving them one by one." Sorry, I make no apology for this footnote. This blog is about architectural history through my eyes, and this is the mote therein. 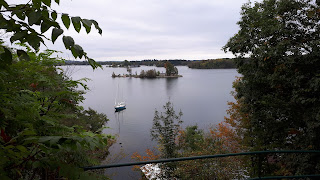 Nevertheless, this post is about Ferncliff. Another 'thing' that is no longer with us. Or is it? The chap at the museum says it's here, the Heritage Designation report says it is, but all I found was a sagging house sign, and the street number painted  on a concrete block (viewed in Streetview should you be the least bit interested.) No sign of the " unique example of vernacular interpretation of chalet deigns found in alpine Europe."

But until I actually see the place, I won't bore you with the details. They're ready to hand, here in the Designation Report. But what does give me tingles, is that it is "a rare surviving example of an early 19th century rural property." For someone who loves natural surroundings and heritage builings, does this not have all the ingredients for a 'happy place?' 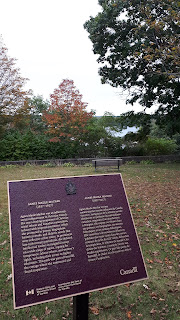 I eventually came to the conclusion that access to the property where it sat/sits is just up someone's driveway (dare I be so bold?) I suppose at some time it became hidden behind newer infill aling King Street (highway 2). The original 1850s property would have been larger. Still today the property round about is wonderfully wild - a steep wooded city ravine tilting downwards to the river forms the eastern extremity. Fingers crossed that no cantilivered modern architectural model ends up perched in the oak canopy. At the southern extremity sits a lovely wooded park overlooking the river. There's more to Ferncliff than this elusive house, however. The story came to me in this park, on a neighbourhood walk close to my 'stay' on a lovely wooded residents-only road. Drawn as always to stands of tall trees (they often shelter old houses) I 'discovered' Agnes Maule Machar park - the Streetview folks beat the plaque to the location, at that time it was called Bluff Park. I learned that it took rather a long time to change the name; town council decided in 1937 to name the park after her.
The NHS plaque tells Agnes' story - a research rabbit-hole down which this Alice fell. I'd tell you learn more about this lady powerhouse c19 social reformer but this biography does a better job. 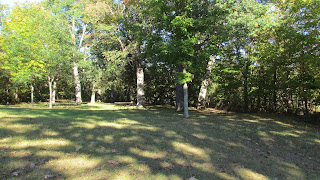 So, mystery solved. I didn't find Ferncliff, not because it was gone, but because it took some sleuthing. Next time I'm in town - it'll be me trudging up that "narrow gravelled driveway" through the "climax forest" to visit Ferncliff.
The things we find when we park the car, and put those walking shoes on.
Posted by Ancestral Roofs at 12:23 PM 1 comment: