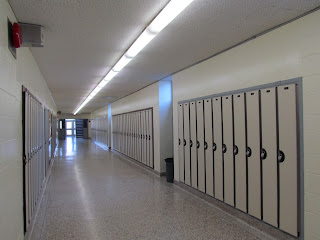 Not long ago, I visited the high school from which I graduated in June 1965. That's a significant length of elapsed time. Then why did a prospective visit to the building, and the possibility of meeting with classmates (should we recognize each other) produce such angst?

Perhaps because high school was not a great time in my life. Despite my dad's envious assertion that "these are the best years of your life", doubtless in exasperated response to an episode of whining or exam panic, high school was not fun. A shy socially inept introvert from a farm, not likely to be voted prom queen. 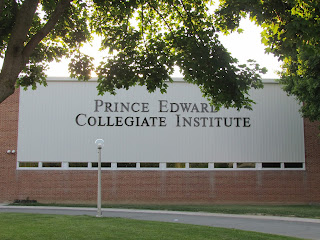 But there it is. I braved it, in company with a dear friend whose high school memories are similarly not of glory days.


I've gone to school most of my life.

Started eagerly with visits to S.S.#4 in North Marysburgh, a school whose closure went unnoticed, as I had launched upon my 8 year career at neighbouring S.S.#3 by then. Eight grades in one room. I'll leave it to you to conjure up the sense memories that evokes. 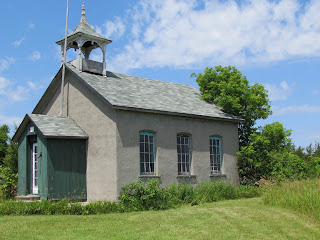 Then high school at the factory in neighbouring Picton. Then a less than stellar undergraduate career at Carleton, when the now massively expanded waterside campus was little more than the buildings around 'the quad.'

Later, Simon Fraser in Burnaby. Even later, summer courses at UBC. A post-grad degree at Gonzaga University in Spokane Washington, an enterprising yankee school which ventured north of the border to south central B.C. to offer part of their program off-campus. Administration courses at Nipissing University in North Bay.

Wish I had photos. Hate to crib some from the net. Have a look yourself, if you're interested, They're easy to find.

Oh yes, failed to mention the rest of my school career. Spent that in offering educational opportunities to others. So, at the time of my retirement in 2007 (about the time I found online courses at Mohawk College to keep the little grey cells active) I had spent 54 years at school. Enough already.

Posted by Ancestral Roofs at 2:12 PM No comments:

Yesterday friend Larry and I needed a bit of city.


So we grabbed the GO train at Oshawa and felt awfully sophisticated zooming above the hoard labouring along 401 (that artery we'd just left, and would have to face again at day's end.)

A wander around Union Station and a reccy of the new Metrolinx Union Pearson Express station satisfied my train nut friend's appetite for rail.

A highly distracted walk (as we both stopped to snap things which interested us) and totally delightful chat  led us to the AGO for lunch at FRANK, to fortify ourselves (delightfully) for yet more wandering.

An eclectic mix of old and new architecture  - and stories about everything, supplied by that 30 year resident of the city.

Plans to do it again? Oh yes.

I've always loved the GO transit logo. Here's a link to the design history. The writer uncovered the identity of the creator of the logo (which goes largely unnoticed and undervalued for its brilliance, in his opinion) as Frank Fox, of the Gagnon Valkus agency. The date? 1967. A great read about a great design. Love this quote: "Sometimes that happens in design. A happy accident."


This Globe and Mail article from May 28 describes the vision and intent of the UP Express. No more ticking taxi meters in traffic jams on the 401, but an efficient and sophisticated swoop into downtown from your international business flight. Snazzy.

Plans to write more about my day in the city?
Oh yes.

But for now I'll leave you standing at the station.
Posted by Ancestral Roofs at 11:20 AM 2 comments: