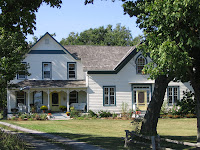 "And you think you know someone..." I can still hear my mother saying this, in an incredulous response to learning something previously secret about a public figure (or a relative), usually something unsavoury.
This is the family home near Bongard's Corners, on Lot 50, Concession Bayside, Prince Edward County. I grew up in this house. And I thought I knew it.
Incidentally I don't call the place "the county" anymore. Prince Edward County was referred to in that way in the days when people's horizons were very narrow, many folk living and dying never having left their home township. It was "the county", because there was no other. Nowadays when I hear the words "the County" I figure somebody (usually someone with big city marketing savvy) is trying to sell me something. Sound curmudgeonly? Maybe, but I've lived long enough to wear the label proudly.
But the house I thought I knew? It's a white frame, 'double' house, built to accommodate two families. When I was very young, we lived in the one and a half storey east side of the house. I vaguely remember a cot occupying a tiny under-stairs room off the main floor bedroom - was it mine or my baby brother's? A large room on both levels, common to east and west sides of the house, connected the two structures. As I study it today, it's so obvious that this room was actually the space to the left of the centre hall in the original house - the windows tell the story. When the structures became conjoined, the door was put through. Elegant and practical.
The east side of the house possessed some fine architectural detail, both inside and out. I remember the centre hall, the stairs with their unique shallow rise, deep baseboards, tall narrow windows with heavy moulded trim and a fine doorcase, Gothic gable window with quatrefoil trim. Cruikshank mentions the wide Marysburgh gable. The front-gabled west side was taller and plainer. I recall its lovely front staircase, a large window with transom (replaced later), pressed tin ceilings, the summer kitchen with the wood stove for canning, and the precipitous back stairs, which were removed by subsequent owners of the 5 generation farm.
As I research heritage buildings, and the generations who lived in them, I am standing back and looking with different eyes, at places I knew intimately. As we step back, our perspective widens. Our resources grow. The lovely Krista at PEC Archives showed me the family name at Lot 50 on an original 1863 Tremaine's map, but no building. In Belden's 1878 atlas (which I'd browsed dozens of times before, but not with a hungry researcher's eye), we saw a structure on the lot. We looked through the land registry and assessment records. We saw the land value increase significantly in 1860. So a safe hypothesis was that the 'east' side of the house dates from 1863-1878, but most likely 1860/63.
Just recently, skimming through a family memoir written by our mother and published by my brother years ago, I spotted something I'd overlooked all my life. Our grandparents Viola and Clarence were married on December 23, 1916 and moved into "the west side of the house built several years earlier." Next time I'm at the archives, I'll take another look at those assessment books; we can likely confirm that date.
So, that explains it. To anyone with a knowledge of architectural history, the double house is clearly of two different styles, of two different dates. But it's my house. I only lived there for 18 years, cradle to college. I didn't notice, until this week.
Bottom: home
Left: cousin Terry and me, and my trim little mom, in front of the "east side". We lost the wonderful Terry, 5 short years ago this week.
Right: me celebrating the arrival of 'the television set', oblivious to the fine windows and deep baseboards behind me.
Posted by Ancestral Roofs at 11:22 AM No comments: 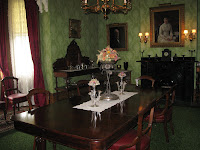 Our stay-at-home dad ruefully acknowledged the need to treat our more extrovert and adventuresome mother to the occasional junket off the home turf thus: "gotta show 'em the bright lights sometimes". 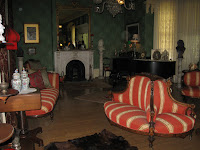 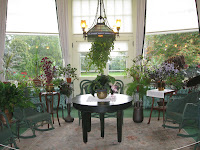 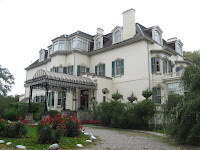 Yesterday, the staff of Glanmore National Historic Site really showed their volunteers the bright lights (many of them lit by gas to this day!) The occasion was the annual (for me, the first annual) volunteer-training field trip. Carefree as kids on a trip to the zoo, we were shepherded by comfy bus to Toronto and dropped at the imposing front door (this one outfitted with a porte-cochere yet) of Spadina Museum, the home of three generations of the socially and financially well-positioned Austin family from 1866 to 1982. Ironically, the home and gardens are one of the many historic museum properties under threat of closure during Toronto's current budget deliberations/war on culture.
The place was stunning, the degree of curatorial research, creativity and resourcefulness for a recent re-restoration of the interior to the 1920's era, awe-inspiring. It will take many more blogposts to process yesterday's experience, and many more visits to fully appreciate this treasure. Best act fast.
With a nod to my father, a few notes about the lights at Spadina.
James Austin was president of Consumers Gas Company so it was not surprising that the house was outfitted with sumptuous gasoliers, many still in operation, at the front doors, in the drawing room. Our guide pointed out that as soon as James died, madam had the gaslight replaced by electricity in the dining room.
The process of researching and re-restoration was mind-boggling. Our guide explained the steps in rehabilitating a delicate painted silk lamp shade, the unique balloon shade near the nineteenth century Steinway (which one of our group actually played!), the story of the broken globes on the Tiffany lamp in the Palm Room. Such small details in a site of overwhelming complexity, the work destined to be overlooked by all but the most attentive and informed.
Suggest you add this to your to-do list: Join Friends of Glanmore.
Posted by Ancestral Roofs at 10:14 AM No comments: