Gables...artistry at the pointy end 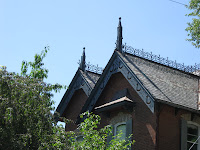 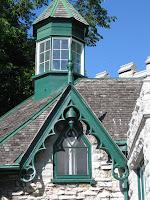 I just picked up a great little book at the library - The Gaiety of Gables. It was published in 1974 (is it just me or do the 1970's seem to be the heyday of publishing about Ontario heritage architecture?). The book celebrates the decorative gable trims of the Gothic Revival farmhouses of Ontario. The author is Anthony Adamson who collaborated with Marion MacRae on The Ancestral Roof. The mostly black and white photographs were taken by John Willard, a devilish hirsute young fellow if we can go by the photo.(Today he likely looks as urbane and cultured as Adamson does in his dust-jacket photo). Adamson writes in a quirky style, folksy yet pompous. Fun to read. Trying for ironic erudition I think, in the fashion of the elegant Miss MacRae.
At any rate, I am loving the photographs. Many of them are of houses really showing their age; I wonder if they are still standing? Willard makes the point that he wants to honour these nineteenth century farmhouses because "preservation is all important, if only in book form." Sadly, his words were likely prophetic. These were simple farmhouses; nobody likely to go to the preservation wall for them.
As always, I am learning to "see" gable trim as I pore over the photographs, and read Adamson's text. I am picking up vocabulary for all of the wooden 'bits' and construction methods, and to my surprise am learning that there are three phases of gable trim or vergeboarding (bargeboarding also acceptable). Not gingerbread - at least not for the purists, I am told. 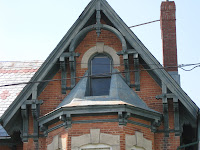 The first stage, according to Adamson was the pure form of vergeboarding, when the builders of the Gothic Revival style recreated medieval designs such as trefoils and quatrefoil shapes, scalloping and curvilinear forms recalling stone window tracery. The example above of green-painted bargeboard on a stone gable is on the McIntosh Castle (c.1849) in Kingston.
A second step in the evolution occurred when local Ontario carvers used a wider variety of designs (from pattern books or their own whimsy) and coaxed a joyous folk art from the available 18" wide white pine boards. The house at the top with finials and iron cresting sports a 'scimitar and worm' pattern (my term) might be an example. This trim is inexpertly mounted, leading me to wonder if it's the real McCoy.
The final phase according to Adamson was the infilling of the peak of the gable with more and more elaborate trim. His tongue in cheek term is the "Inside Outside" gable for the fashion of exposing the interior roof supports - resulting in kingposts, finials, pendulums and eaves trim all gracing the same roof-line. Decoration moved to the peak of the gable and spread. A final development was the addition of brackets to hold the corners of the eaves, providing even more space for carving artistry. The red brick example with the dark blue trim above is from Newboro. Definitely worth a visit.
So many more reasons to look up, adding the joy of recognizing styles and rolling new vocabulary over the tongue to the sheer emotional pleasure of seeing something so old and so beautiful.
Posted by Ancestral Roofs at 5:39 PM