It's a Lunenburg thing 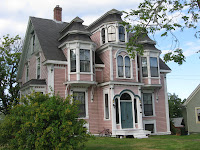 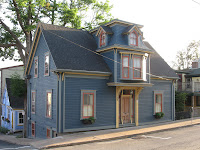 You see it in Lunenburg Nova Scotia.
You can see some of them in nearby Mahone Bay.
I expect there are examples all around that seafaring province, as influences do tend to spread.
But I doubt you'll see it in Ontario (unless the builder were from downeast and very homesick).
What is it?
Why, the Lunenburg Bump.
As the year draws to a close, I am looking back over this year's travels with old buildings, and my mind inevitably goes to our wander through the UNESCO World Heritage Site that is Lunenburg old town. While researching on-line in preparation for the summer camp trip, I read about the Lunenburg Bump and was prepared for this practical but to my eyes rather unlovely maritime invention.
The Lunenburg Bump is "a projection from the centre of the house, over the door, comprised essentially of an enlarged, extended and overhanging dormer, most commonly of the five sided Scottish type. Cantilevered out from the wall or supported by decorative carved brackets, the Bump resembles the Oriel windows of late Gothic and Tudor architecture". I have used the words of Bill Plaskett, Development Officer, Lunenburg County District Planning Commission because, hey, he's from there, but mostly to salute the incredibly far-sighted citizens and municipal politicians who preserved and are now showcasing their built heritage to the world. Plaskett's book, Understanding Lunenburg's Architecture was published in 1979 out of a thorough five-year review of the heritage area and careful forward-thinking plans for it!
The pink house on the left above is the Morash House (1888). Plaskett concedes that it is "to some extent, top heavy from the abundance of decorative Victoriana" but comments on its picturesque symmetry, "striking and even beautiful once one accepts its essential "Bumpness"". Bumpness, I love it!
I picked up one or two other interesting facts about the well-crafted houses of Lunenburg. Not surprisingly, the houses were built in large part by shipbuilders and woodcrafters, who used the winter months to showcase their skills by creating elaborate and original homes. Some of the grand houses of ship-owners were painted in the colours of their fleet.
The influences they brought to bear are French, German, Swiss, New England and British - all these traditions show up somewhere in the nineteenth century streetscapes. Vaguely British, somewhat New England, as Alan Gowans stated in 1962, but neither. Just Lunenburg.
Posted by Ancestral Roofs at 6:33 PM