Whose Home is it Anyway? 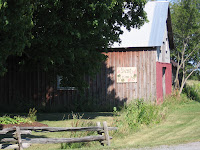 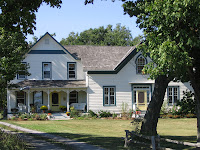 Until very recently, my childhood home in North Marysburgh, Prince Edward County, housed a lovely yoga retreat centre. (We were always somewhat grateful that we did not get to hear my late farmer father's inevitable derisive snorts). Wendy and Darin cherished the home and valued its history. The farmhouse has recently switched owners again - another layer in its old story - another family makes it their home.
As a very young child, I recall my grandparents and my then unmarried uncle still living in the west side of the double house, while our young family occupied the older east side. My brother and I grew up in this house, free as 1950's and 60's country kids could be - free to disappear 'til dinner, free to wander and create and just 'be'. Our hardworking farmer parents required minimal output with regard to chores, belying the very hard farmer's life that led to the pragmatic decision to sell in 1969 - there being a dearth of farmers to be found in the family by then.
The house was owned by one or more small farmers after that, until it was bought and extensively remodelled/preserved by two physicians 'from away'. Then the folks of 'Shanti Yoga' made it theirs. So many changes, and most of those in the past 40 years.
That 1969 sale marked the first time the farm had been owned outside the family since John Pierce (born 1832) farmed Bayside Lot 50. The place was home to John, wife Lydia and their 6 children, one of whom was my great-grandfather. I have a photography of John, son Levi and grandson Clarence - my grandfather - seated on the front verandah of the 'west part of the house'.
The old place looks pretty good still. So many families have made the old home, HOME.
Posted by Ancestral Roofs at 12:21 PM