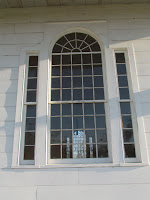 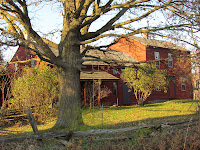 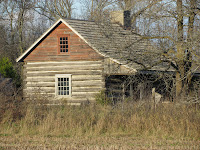 My husband Denis and I went exploring in Prince Edward County last Sunday. We were sleuthing, at the invitation of a local historian, trying to learn the story of a very old church standing in a picturesque spot near Fish Lake. 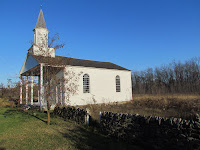 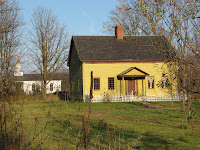 At Den's encouragement I braved loud dogs and even more intimidating watch-geese to talk to a delightful fellow who is renovating a deserving old house across from the church. I wanted to see if he had any information on the very old, authentically restored church with the new foundation faced with limestone and the tell-tale electrical service entering discreetly at the back.

Well, courage was rewarded. The fellow was Kip Brisley, son of Dr. John Brisley, a retired dentist, and his wife Diane, who are well-known in heritage circles. Kip definitely had information. In fact he has done a lot of the restoration work. As he wryly put it "I'm a musician so I do a lot of carpentry"

Since that conversation I have found a number of sites with information about the church and several nearby early houses, all exquisitely restored. Turns out the area is called 'Brisley Village' in some circles. I can understand that. I had the feeling of artful authenticity and 'time travel' that I have experienced at spots like Upper Canada Village.

The church is the 1820/23 St. Paul's Anglican church, a loyalist church, which was taken down board by board, moved from its Adolphustown location and rebuilt in its original design in 1997 by the Brisley family. A drystone wall circles a 'burial ground' to the right of the church, adding a real feel of authenticity.

And the intriguing yellow and red loyalist houses nearby?
The yellow house was moved from Cobourg (I think he said) and the little log cabin with the cantilevered porch, in the trees behind the red house, was moved from a location in the southern part of the county, and faithfully restored.

The red house, where the senior Brisleys live, is documented in my favourite source, The Settler's Dream. That building is the c.1818 Demill-Foster-Jones house, its influences more New England than Upper Canada. It was the home of John Demill, son of Vermont Loyalist Isaac Demill and his wife Mary Dixon who arrived in the Sophiasburgh area in 1792, and raised seven daughters and four sons. In 1810 Isaac senior received the Crown patent for the land onwhich much of today's Northport grew. The homes of three of Isaac's sons, John, Isaac and Peter, still stood as the Cruikshank-Stokes-de Visser work went to print in 1984.

Must go have a look-see.
Posted by Ancestral Roofs at 8:07 AM