I occasionally check Blogger stats.
Sometimes I can tell what people are interested in by the titles that come up in the list of visited posts. Other times I suspect webcrawlers.
Occasionally, seeing an old post reminds me that I once promised to return to add more information or captions. Sorry, Grafton!

Today I had a look (along with some unknown visitor) at Out-takes. This is text which ended up on the cutting room floor (Orland French's treetop office on Albert Street) at the time that the 2013 book Wind, Water, Barley and Wine was being put together.


It reminded me that I had more to say about PEC architecture.
And that I had committed to doing so.
So. Brick.

Prince Edward county and Picton in particular is a red brick kind of place. There are plenty of early county brick homes still standing 200 years after they were built, likely with bricks baked on the property. The HASPE survey completed prior to 1984 (ssource of much of The Settler's Dream research I suspect) lists the most likely candidate for PEC’s oldest brick house honours as the Asa Werden house, built on his extensive Athol property in 1813. Werden, a successful lumberman and property owner, built a fine house befitting his station in life. The home displays early characteristics: tiny square attic windows, tight eaves and wide facade/narrow side footprint. The brick is a rare pale salmon pink hue, laid in prestigious Flemish bond on the façade with the less impressive common bond on other elevations. That's a common conceit which survives to the present day - putting the showy and more costly treatments where they will make the best impression. Check your nearest subdivision. 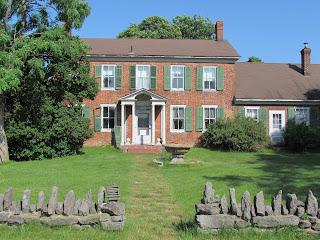 Another exquisite early brick home, the austere 1829 Loyalist Georgian  dwelling built by Richard Miskin and his wife Sarah, daughter of Carrying Place pioneer Asa Weller, shows the characteristic evenly spaced windows across five bays. Until recently the house was in a poor state of repair, but my last drive by was much more encouraging. 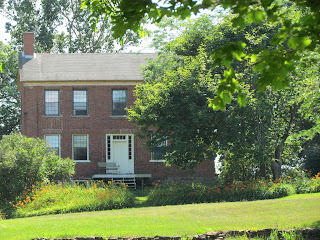 The fine c.1813 John Scott house was rescued from oblivion by Rodger Greig. local teacher and built heritage expert, writer of the sometimes cheeky volume The Splendour of Prince Edward County (Mika Publishing, 1991.) The house stands far from the road on the way to Point Petre in secluded treed grounds. It features paired windows, identical front and back door-cases and a basement kitchen, signs of its early pedigree. It is built of small unevenly coloured colonial brick, with the preferred cherry red reserved for the front façade. 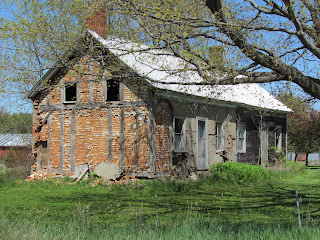 My heart broke when I witnessed the 2012 demolition of the doughty little Mouck house near South Bay. It was built around 1836 by William Mouck, and was generally considered the oldest brick house in South Marysburgh. Its small windows in gable and façade, tight eaves and simple eaves returns proclaimed its age. 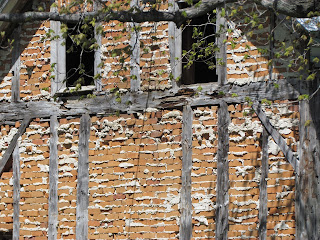 At one time the house was covered in rough-cast, suggesting the brick was beginning to deteriorate. At its demise the house revealed its brick heart; the imperfect bricks used as insulating infill, or ‘nogging’, placed between wood framing elements.

Cruikshank and Stokes comment on the significance of this dignified small house built in brick in a rural setting “at the time brick was generally reserved for palatial houses in towns.” 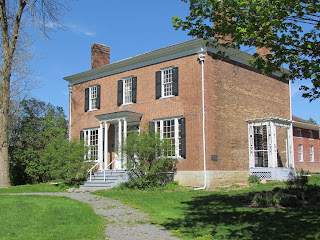 One of the county’s finest early brick houses was built around 1830 by the Reverend William Macaulay who established the Church of England presence in 1821 in Delhi, the area south of today’s Picton harbour. Macaulay owned most of the property in the area, and oversaw the growth of the new community in spiritual and temporal matters; he donated property and resources for many significant buildings in the area. 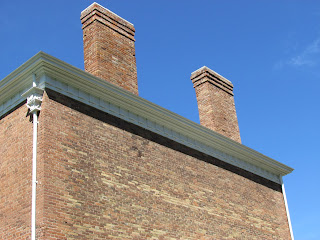 Macaulay House, today part of Macaulay Heritage Park, illustrates many characteristics of early brick building. The colour of the brick varies greatly, from the prestigious even cherry red (considered the finest colour) Flemish bond brick across the front to the mixed hues varying from tones of pink to buff to brown on the less important sides. 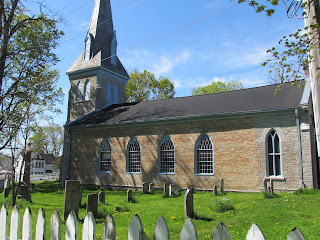 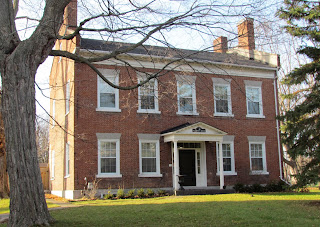 I love these two  large former farmhouses in Picton. They seem aloof, turning away from the street. Turns out  they were built before the town was surveyed into house lots and didn't know which way to turn. 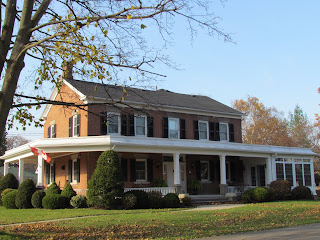 Another original farmhouse, built by Joseph Johnson about 1835, sits on today's Johnson Street, although the facade is oriented to the south and what was once an uninterrupted view to the harbour.

Its brickwork is laid up in Flemish bond,  rare at that time,  according to something I've read somewhere. 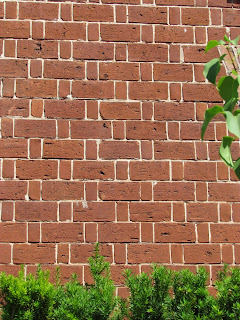 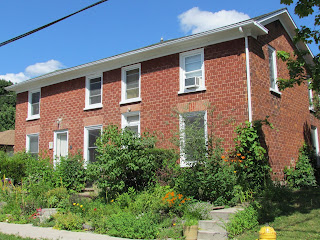 While I was writing the chapter I had a lot of fun learning bricklaying (on paper.) Page 107 of the book displays my prowess. Common bond, Flemish bond, and my favourite, Rowlock bond are shown. Rowlock bond was the trademark of  the bricklaying Welsh brothers, whose work I featured here . Turns out the clever lads didn't used bigger bricks, they just stood them on the skinny side, to make them go further!

I wrote about an endangered rowlock bond house on the 'town hill' in Picton, back in February 2013. Last time I looked there was a 'development opportunity' being shilled for the site. Poor prognosis for that little house. 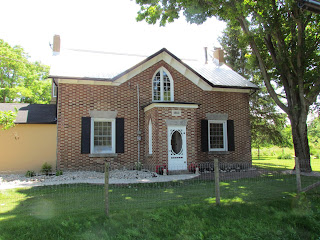 A final note on brick. A most versatile building material. I am continually astonished at all the varations a brick-builder can create: dog-tooth, corbelling, a pattern I cannot call anything but "smocking." Then there's polychromatic brick-work.

A rare sighting of checkerboard brick is to be had in Waupoos. 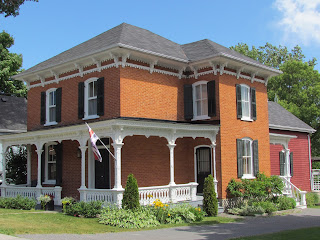 But the last word in brick (oh wait, I forgot the 'white brick' house in Picton, likely from Sandbanks sand) goes to the stately deGroffe houses of Bloomfield from the late 1800s.

These simple, elegant, commodious homes lend dignity to the village and give it some of its distinctive character. 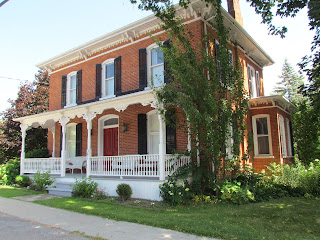 I read somewhere that the Degroffe trademark is said to be the showy cornice detail on these otherwise plain and practical (Quaker-inspired?) homes.

Posted by Ancestral Roofs at 9:02 AM