Down to the Sea in Ships

Regular blog reader and fellow time-traveller Mark once mentioned a visit to the Old Customs House in Oakville, imagining weary newcomers arriving, full of hope and trepidation, to this fine structure in a relative wilderness. The imposing British Classical style Custom House (c1855) is the building on the right in this photo. 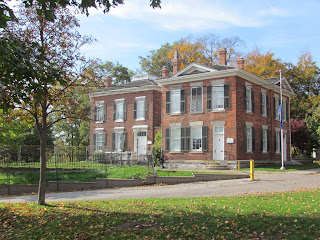 Some time back, I spent a blissful afternoon wandering the streets of Old Oakville: a neighbourhood bounded by Front, Navy, Dunn, King - containing more exquisite views of water, gardens, mature trees, and historic homes than the heart could bear.

Can't recall what I used for a guide - my nose perhaps - but later found this Walker's Guide (1994) published in PDF by the Oakville Historical Society.

Tom Cruickshank provides an interesting profile of William Chisholm, the founder of Oakville (Century Home, September 1994.) It provides an insight into how 'get-ahead' people got ahead, in the earliest days of our country. Influence. Means. Intelligence. Vision. 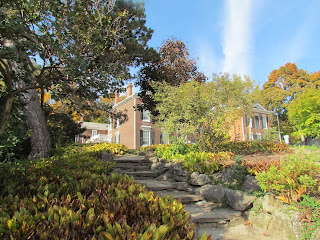 The massive Erchless Estate was first owned by William Chisholm, the founder of Oakville. In 1839, he deeded the property to his son Robert Kerr Chisholm, who was a Customs Officer. Robert built the Customs House in 1857 and the Erchless building c.1858. (I know, the dates/sources don't agree.)

The Town of Oakville Register of Designated Heritage Properties has this to say: "The residence building represents the strong Italianate styling popular during the 1850s. Features include a belvedere, wide moulded eaves with brackets, slightly rounded window openings enhanced by stone trim and lintels and a decorative doorway with multiple light transom and sidelights."


Back to Tom Cruikshank's account: "Since arriving in wilderness Upper Canada, he had had his eye on the site, then a reserve for the Mississauga Indians, noting its potential as a port. As a prosperous merchant and an influential figure in the provincial government,he lobbied to purchase the land [a 960 acre parcel which became the townsite] and finally his wish came true in 1827. As the major landholder, he oversaw development of the town, built a wharf ...and remained at the helm of a flourishing importing/exporting trade. He even built a fleet of schooners to carry his goods up and down Lake Ontario." 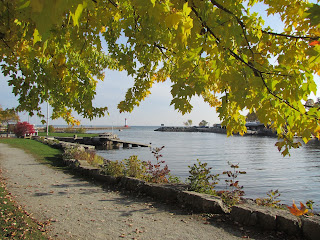 Chisholm developed the natural harbour at the mouth of 16 Mile Creek (so named, I've read, as it was sixteen miles from the head of Lake Ontario) to become the epicentre for the growth of the area. Shipping and shipbuilding, toil and bustle.

Today the place is bucolic and beautiful, with the Erchless mansion and Custom House housing a museum and archives interpreting the harbour's former working life, the Erchless rock gardens in their glory, miles of park and waterfront paths, yachts at their moorings, the sparkling lake outside the breakwater.
The superlative Lakeside Park area contains enough history, nature both wild and domesticated,  and built heritage to keep this girl happy for a long time. 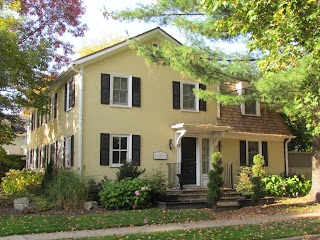 Inside the Custom house, the Oakville Museum interprets the life around Oakville's harbour - shipbuilding, sailing, importing and exporting, immigration...and a chapter in the story of the Underground Railroad. Here and there in my readings, I have noticed stories of ship's captains bringing former African slaves to freedom through this port.

This house, at 41 Navy Street was built by Captain Robert Wilson, who started his mariner's career at 14 (his widowed mother brought her 10 children to Upper Canada in 1817 - women were made of tougher stuff in those days.) He became master of the second schooner launched at Chisholm's shipyards a scant 10 years later; he helped many slaves escape to freedom across the lake. A later Wilson home not far away, dubbed 'Mariner's Home,' hosted an annual gathering of those he had helped, in celebration of recognition and gratitude.
Posted by Ancestral Roofs at 3:13 PM