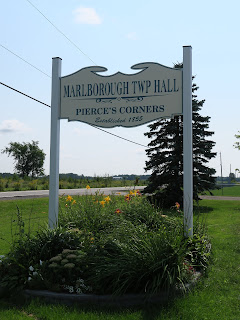 As I browse my road atlas, and bash around Ontario's back roads, I often encounter communities  named (either intentionally, or just because that's what folks always called them) by the intersection around which they grew. I would guess that typically the name matched that on the deed or crown grant of the owner of the lot nearest that country crossroads. Often he (invariably he) would have been the donor of a half-acre for a church or school - or maybe a hall - somewhere close by. 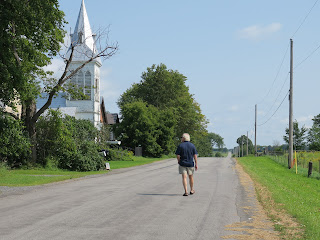 During our Rideau River based junkets, LOML suggested we take in Pierce's Corners nearby. Funny. Having a place named after one (but not really) gives a visit a special kind of resonance. Wonder if  some ancestral Pierce took up land here in the early 1800s, as the family heeded the call to 'spread out over the earth and multiply on it'?

Here's a link commemorating the visit of the Streetview car. Come along on our walk. 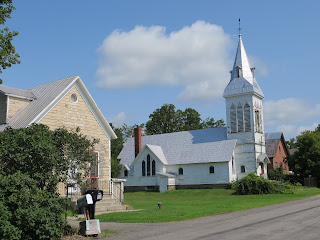 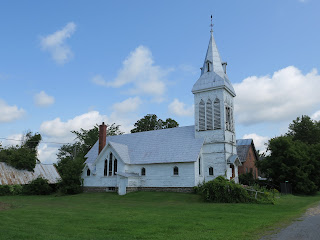 The cross-roads hamlet looked deserted when we wandered its streets (well, both cross-roads) but several not unimportant buildings drew us.

The rather magnificent timber-frame Carpenter Gothic St. John the Baptist Anglican Church (1892) church invites exploration. Original stained glass windows and a drive shed which once sheltered parishioners' horses during Sunday service are remarkable features of this otherwise pretty run-down church. Damage to louvres in the fine bell tower makes me wonder if there is any commitment to keeping it? It was decommissioned only in 2008 according to my sources. 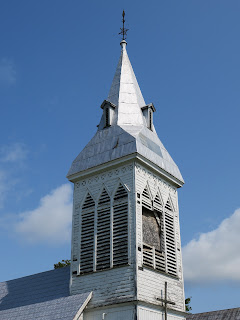 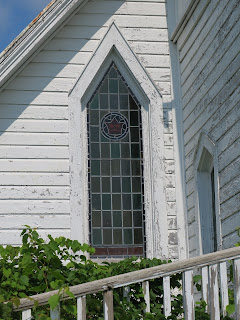 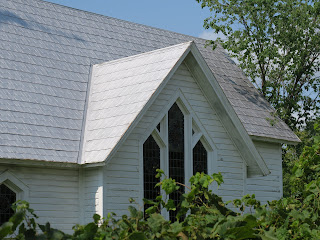 Next door to the church, a barn complex. I wonder if the smaller log building might have been a settler's first home? This area was active pretty early (nearby Burritts Rapids began in 1793) so it's unlikely the building could be standing for so long. But it's always fascinating to revisit that settlement narrative. 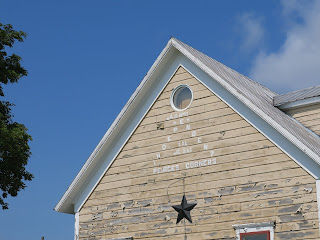 On the gable end of the Loyal Orange Lodge next door, with its interesting chapped buff paint is inscribed: 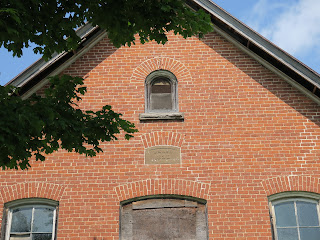 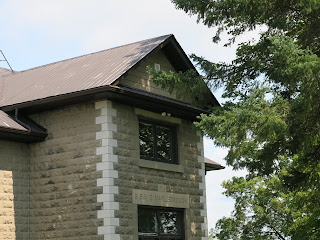 Astonishing. The 'corners' has two schools. There's the  red brick S.S.#3 dated 1890 - a substantial school house with segmentally arched windows and fine brick work above. Next door, and converted to residential use, is a two-storey cement block (once the newest thing) school with a 1914 date stone, S.S.#3 Marlborough. Only twenty-four years separates the two buildings. What happened here? Perhaps the community grew to be able to afford a high school on the second level? Surely there is a local history I can find - right now I am flummoxed because of Mike Harris' clever amalgamation of townships. Am I still looking at North Gower here? I'll keep you posted.

I flipped to the index of my road atlas. No shortage of communities named for the corner around which they grew (or didn't.) South of today's Nepean, Baxters Corners, Mills Corners and Moores Corners claim their spot in the sun. There's Bishops Corners near Cloyne (the spot with the great museum) and Baltic Corners northwest of Alexandria. Scotch Corners. Pethericks and Pattersons, Ledgerwoods and Lehighs, Stones, Snowdons, and Sweets Corners. Communities with or without apostophes

Murphy's Corners on the Old Hastings Road, Allans Corners just north of Huckabones Corners on highway 41 above Napanee. Armstrongs Corners and DeWitts Corners near Perth. Little cross-roads stands taken against encircling farm and bush. Each little pond with a big toad or two, as our dear little mom would observe.

Increasingly, those place names on the map fail to materialize, and we drive past former settlements of people and their few services and many dreams, without spotting any evidence they'd ever stood.

But we've always looked. And we'll keep on looking.

Posted by Ancestral Roofs at 8:45 PM