Mother of All Links

Still caught up in the collector's urge, I had a look online for Parks Canada's 1980s publication about Gothic Revival architecture, part of their series based on The Canadian Inventory of Historic Building conducted in the previous decades. Written by one Mathilde Brosseau. Sadly, the only copy on offer, with my go-to friends at  Abebooks, priced out at $36 US, which, along with delivery costs from a California bookseller, put the volume somewhat out of my reach. Somehow, Parks Canada has managed to make all things possible, with a PDF online of the entire epistle. 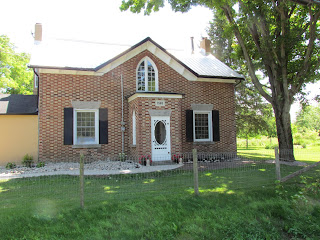 The notes locate this checkerboard brick place in Milford. (It's really North Marysburgh, "upper Waupoos" I suppose.) Despite the 1863 date-stone above the box porch, the book dates it at ca.1850. "This house is of particular interest because of its fanciful fapade (sic. Tsk-tsk, government line editors) in which red bricks are alternated with yellow bricks to create a checkerboard effect. This interest in polychromy was apparently encouraged in Ontario by a wave of British immigration during the second half of the nineteenth century. The enclosed porch is also an indication of British influence. ALthough the Canadian climate would appear to have required this type of entrance, it had never been popular in this country. On the other hand, Louden's encyclopedia contains houses with small entrance porches like this in the form of a compact block against the centre of the building." 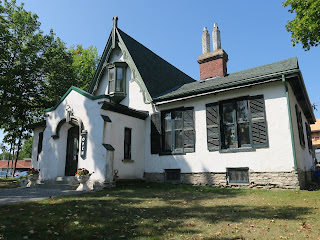 Not surprisingly, another of the  local domestic examples that caught the eye of the writers was this very familiar spot in town, once called 'The Grove' now a creative hub renamed 'Falconer House,' the new name an homage to a previous owner.

"The Grove, 111 Main Street, Picton, Ontario Material: rendered masonry Although at the present stage of research we are unable to establish the date of construction and the architect of this house, it can be said that the builder was well informed of developments in the Gothic Revival. At a first glance, it appears to be simply a small house with a central plan and pavilion roof, of which there are many examples in Ontario towns throughout most of the 19th century. However, the choice of decorative elements and their scale and proportions give particular value to this composition. The main entrance is highlighted by a small porch interrupted by elements resembling buttresses. The top of the porch has a triangular suggestion of the gable behind it. In the gable, there is a tiny bay window gracefully framed by a fretwork fascia board. Two narrow chimneys placed on either side of the gable highlight the composition of the centre of the building. "

The Parks Canada publication features a third PEC home, very close to Point Petre. It took some finding, identified in the book as "house in Athol." Hmmm. Looked familiar, being a very common Ontario farmhouse form. But I couldn't find it in my photo files. So I turned to The Settler's Dream. Turns out Stokes and Cruikshank had found the house noteworthy so on page 101 I was able to find the original owner - Scott. The house was located on Lot 14, Concession 4, South Side of the Lake, "on the way to Point Petre." Checking Belden's atlas of Athol township, I found a property under Scott owership. With Streetview, I drove up and down County Road 24 until I recognized it. Here's a link to their capture of the place. It's lovely, the owners have done nice things. Sadly, the day the camera slid past, there was a work bee of some sort, and the only image I can show you does not do justice to the c1850 (according to Brosseau) red brick home. Must pop down to the point sometime in the spring; cannot think it's the place to be after yesterday's 24 hours of snow and wind.

So this is what Mathilde Brosseau has to say about this lovely brick house: "The volume and proportions of this house express the happy medium and sense of balance arising from the Loyalist vernacular tradition. The Gothic Revival influence is present, but discreet, as indicated by the sober design of the pointed window placed in a very low-pitched gable; in addition,wooden fretwork trim runs along the roof edge and the verandah. The latter was doubtless added in the last decades of the 19th century when the coping saw replaced the craftsman's traditional toos, resulting in two-dimensional fretted wood designs instead of the highly plastic former profiles."

Is anybody still here? I'm having a great time, at any rate. And it's my blog.
Posted by Ancestral Roofs at 10:36 AM