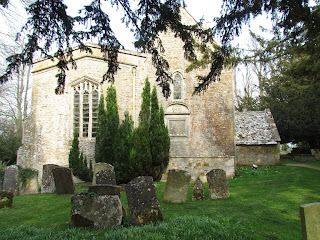 Something calming about this place. Reflective. Perhaps I should share a church each Sunday.

This is the lovely old church of Saint Nicholas Oddington, Gloucestershire, a Norman church with a newish Early Gothic nave and chancel (added after a visit from King Henry III, king from 1216 to 1272). We visited there for the bluebells, with D's sister and her husband, in April 2019.

And I go back today in photos. 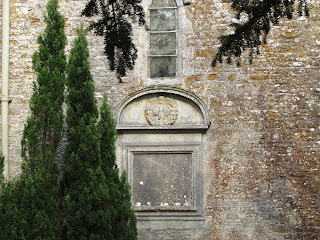 St. Nicholas Oddington is a short walk from the village; it's speculated that the neighbourhood which once would have encircled it was abandoned in time of plague. No hint of the terror of that time left behind. The yew-filled churchyard beckoned, its tipping stones lovely in the green.

But the family was keen to show us the wonders within. The church had been in ruins for years, restored in the 1900s. It's grand for its time, an abbey near what was once the residence of the 13th century Archbishop of York. 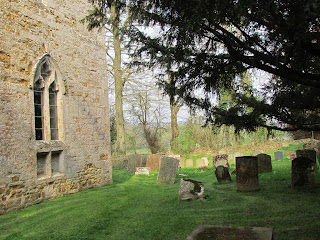 The brochure provided for the visitor (thank you Friends of St. Nicholas) shares much more history than a mere wander would glean. The church was built in Saxon (!) times, belonged to St. Peter's Abbey in Gloucester, but was ceded to the See of York in 1157. There was a lot going on in this bucolic bit of England, back in the day. The Archibishop of York was also the Lord of the Manor of Oddington, and Henry III often stayed at his place. This visit prompted the major expansion in the 1200s. 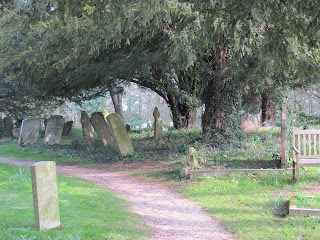 I have always loved yews, and continue to do so, even after learning that yews were planted in churchyards to grow through the eyes of the dead to hold them in place, thus becoming a symbol of death. (And it that doesn't  give you an insight into the mindset of the folks for whom the Doom painting was instructive...)

Don't believe me, check out these folks. 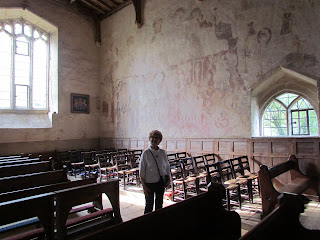 St. Nicholas Oddington is famous for two monumental events - one religious, the other villainous.

Behind Trish is the Doom Painting, emerging from the preliterate days when clergy needed imagery to scare their flock into being good. The Doom painting (there are others throughout England) is one of the largest surviving. Imagery includes Jesus surrounded by saints, angels sounding a trumpet to raise the dead, who are rising from their graves to meet Judgement. Some are heading to heaven, others dragged to hell welcomed by Satan. 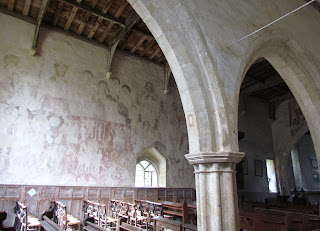 There are other paintings in the church, all of "exceptional national importance." Many of the Doom paintings were deliberately defaced during the Reformation, so these medieval paintings are a precious rarity. Oddington's is an especially fine one.

For more on the Doom paintings, click some of these links: Doom Painting, photos at this site, and even Trip Advisor has something to say. 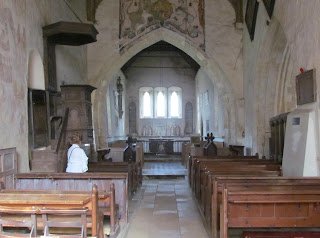 Now, I'd mentioned villainy. Modern-day villainy, not the Reformation kind. In 2016, thieves removed the copper roof over the main nave, and a rain-storm caused considerable damage to the irreplaceable Doom painting (weren't they at all worried about Judgement?)

A grant provided for a new steel roof, a roof alarm and the restoration of the painting. I wonder, Mark, would this happen in Canada? Volunteers now keep a close eye on the old church, opening most days for visitors to be awed. There's even more history to be had, but I'm exhausted (and you may be bored?) 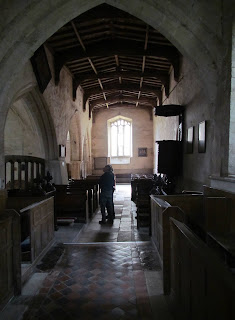 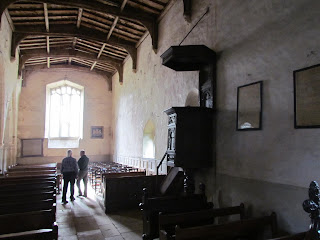 The church, which has no electricity or heat, was parky on the April day we visited, so the bluebell woods beckoned, in the pale English sun. 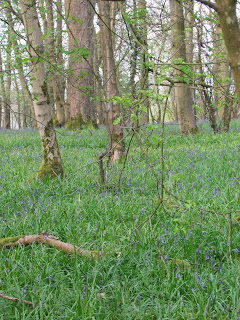 Now Canadian content rules are adamant on this point, so let me conclude with images of a few of my favourites among our Ancestral Roofs.

Posted by Ancestral Roofs at 1:07 PM