"Land o' Goshen!" Look it up. An old-fashioned expression, a "mild exclamation of surprise, alarm, dismay, annoyance or exasperation." The kind of thing you'd expect to hear Mayberry's Aunt Bea say. It derives somehow from the biblican Land of Goshen, the region in Egypt inhabited by the Israelites until the Exodus. And Goshen is the original name of this church in a fascinating "lost village" in the Abbotsford area of B.C.

So says On this Spot, a wonderfully researched site devoted to this tiny old village, since absorbed by sprawling Abbotsford. The village of Matsqui.

Layers on layers of B.C. history pass unnoticed, as one drives the flat river bottom land en route to other pleasures. Like the charming and historic - and restored - village of Clayburn with which friends Meg and Tom delighted us  on our visit to them and their province, nearly five years ago. How can it be?

This post was a draft in my new series from early this year, when the Covid travel famine forced me to mine for virtual road trip material in journeys from another time, with my travelling companion who made his own last voyage not long before. So. This makes me happy. And sad. To remember his infinite patience with photo junkets filled with "oh, can we drive down there!" "Oh, will you follow me in the car?...I just want to walk through that lane..." Whatever will I do without my getaway car driver?

The visit with Tom and Meg was special in so many ways - and notable for walks. Walks along the dyke holding back the mighty Fraser, visits to a Chilliwack heronry. Walks along a mossy ferny cedar-scented neighbourhood stream. Walks among towering azaleas at a hillside monastery.

Stay with me, as I remember how to write again.

This is a post about a place people drive through daily without noticing, a place of spreading subdivisions and shrinking village presence. The village of Matsqui  has been absorbed in the municipal sense by the sprawling city of  Abbotsford - absorbed and disappeared.

It's difficult to get a feel for life in today's Matsqui, much less the thriving little community of 120 years ago. A walk through town helps. A visit to a great website with  then and now photos and good commentary aids and abets. Matsqui seemed a familiar name from my Vancouver days, but U couldn't place it until a bit of searching revealed Matsqui....ah, that Matsqui. The one with the Federal medium-security prison; I once drove a neighbour there to visit her husband, in another life.

Then, as until recently,  I had no knowledge of the traditional keepers of this area. The Sto:lo people who lived lightly on the land and river in the valley were forced out by European settlers in the mid-1800s, in that way we colonizers had. Their ancestral lake and wetland territory with its abundant cedar and salmon economy was drained for agriculture, and their free and proud life disappeared. In a tragic irony, Sumas Lake is now reclaiming the territory this month. Important to read the entire story at the website I have provided links to; it's not pretty but one we must learn. 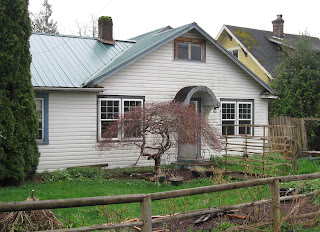 The  Norwegians played a role in the colonization of the area. The On This Spot site tells their story in detail. But for an abridged version: it's the same story of hope and struggle told by immigrants everywhere. Hundreds of thousands of Scandanavians caught 'Canada fever' in the 1890s to 1900. They left their harsh lot at home and started over again in the Canadian west. Their roots took hold in the fertile Fraser Valley, and many of their descendants live there still.

I'll leave you with a few views of wet-wool cloud, rain-nurtured ever-green grass and moss upholstering the old walls of the village.
On this wander down St. Olaf Street, named after the patron saint of Norway, you'll see many of the places I've shown you, captured by the bigger technology of the Streetview folks. 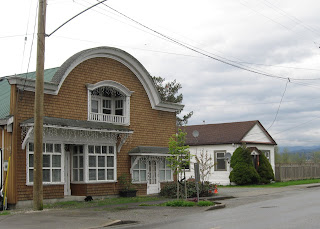 So...this post  which has sat waiting since February asks to be written, Now that our hearts and minds turn to the flooded farms of the Fraser Valley, I revisit these photos and those carefree days when my love and I travelled the area with Abbotsford friends Tom and Meg.

Hearts are breaking everywhere there.

Posted by Ancestral Roofs at 2:20 PM